William J. Riley, president and chief executive officer of Halifax Industries Limited, says: "Given our very competitive cost levels and our strategic geographic location, we believe Halifax has a big future in North Atlantic ship repairing, and this modernization program will greatly increase the efficiency and technical standards we can offer customers." Phase one of the modernization scheme, which cost $C7.5 million, has already been completed.

This phase entailed construction of the foundation for the yard's recently commissioned 185-meter by 25.2-meter (about 607 by 83 feet) floating dock, Scotiadock, which has a lifting capacity of 16,000 tons. Also involved in phase one was the replacement of older piling at Pier 6, and the total rebuilding of the machine shop wharf.

The water supply distribution system in the yard has been totally replaced with a new underground system that provides greater fire protection and pumping capabilities. Also replaced were the distribution systems for steam, air, oxygen, acetylene, and condensate. The new systems can supply 100 pounds pressure of steam or air to any location in the yard. Oxygen and acetylene are now stored centrally, and there is a new underground supply system to all the yard's facilities.

In total, 33,000 feet of piping was used to install the new systems.

New machinery purchased included a heavy-duty lathe with a 72-inch swing over the bed and capable of handling shafts to 40 feet. Also acquired as part of the first phase improvements were a metal-cutting saw, a jib crane, a heavy-duty spray washer, a turret lathe, a bandsaw, a bake oven, pipe-threading machinery, and a drill press.

In addition to the yard's $C7.5- million first phase, $C6 million was spent on the purchase and commissioning of Scotiadock.

The next phase of the scheme, which will cost another $C6 million and involve the modernization of the yard's steel fabrication facilities, is now going ahead.

New machinery for a plate preparation (shot blast and paint) line and a panel welding line will be purchased. Also in this phase will be the rebuilding of the yard's slipway, on which stern trawlers are to be built.

In addition to Scotiadock, Halifax Shipyards is to acquire in late 1981 the use of an over-sized "Panamax" floating dock capable of handling vessels of up to 116,- 000 dwt. This $C43.5-million facility is to be bought jointly by the Canadian Federal Government and the Provincial Government of Nova Scotia, and then leased to Halifax Industries Limited. 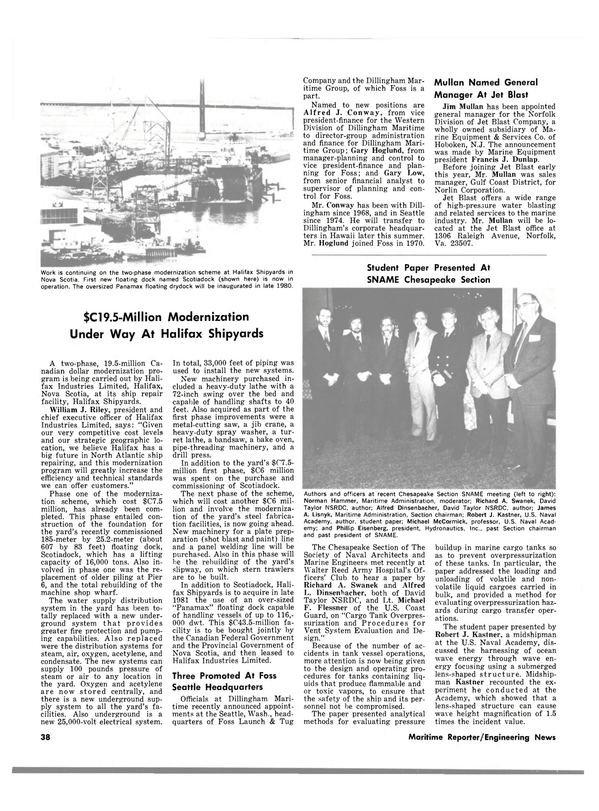 Read $C19.5-Million Modernization Under Way At Halifax Shipyards in Pdf, Flash or Html5 edition of May 15, 1980 Maritime Reporter