Adm. Harold E. Shear was sworn-in recently as Administrator of the Maritime Administration by Secretary of Transportation Drew Lewis.

The former Commander of Allied Forces in Southern Europe is the first to head the agency since it was transferred to the Department of Transportation from the Commerce Department last August.

Secretary Lewis, commenting on the appointment of the four-star admiral, said: "Admiral Shear is well-qualified to take on the tough task of reinvigorating our nation's maritime resources. In this undertaking, he will have my full support and will work closely with the Congress and all segments of the maritime industry.

"In addition, the recent transfer of Mar Ad to DOT will ensure that federal maritime policies and initiatives will be more effectively coordinated and administered than in the recent past." A much decorated combat veteran, Admiral Shear specialized in submarines for 25 years and among his commands was the nuclear-powered, ballistic missile submarine USS Patrick Henry. During the Vietnam War, he commanded the Navy's first fast combat-support ship, USS Sacramento.

Admiral Shear retired from the Navy in 1980 and came to the post at the Maritime Administration from Norton, Lilly & Co., a New York firm which serves as general agent for shipping companies, where he was vice president.

Naval Academy in a wartime accelerated class, Admiral Shear served in both destroyers and submarines during World War II.

During his 39-year naval career, he held numerous important commands, including director of the Navy's submarine warfare and antisubmarine programs; chief of the U.S. Naval Mission to Brazil, and vice chief of Naval Operations.

At the time of his retirement in June 1980, he was Commander in Chief of Allied Forces in Southern Europe, which placed him in charge of armed forces of all NATO nations on the southern flank of Europe from Gibraltar to the eastern boundary of Turkey and Russia.

He is married to the former Elizabeth Perry of Falmouth, Maine. They have two children, Kathleen and Kenneth.

In a brief address following the ceremony, Admiral Shear promised to "push very hard to get this industry back on its feet." He told a crowd of about 150 industry representatives that he anticipates "significant progress in the months ahead." 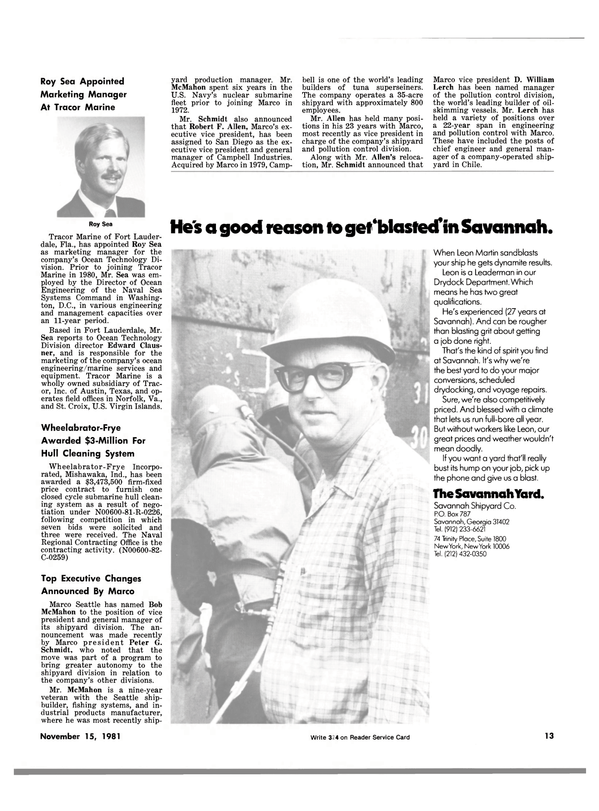