Bulk-carrying river barges often look as if they are floating effortlessly upon the waters, but St.

Paul, Minn.-based TCS Industrial knows that it takes a lot of power to handle one. Therefore, specially designed barge-moving systems are a must for any terminal dock.

TCS Industrial's solution to this load-handling problem has been to use two side-by-side winches powered by an electro-hydraulic power unit feeding low-speed, high-torque motors. Wire rope runs from each winch to a connecting link which is secured to the barge to control its movement. It is reaved around various sheaves to form a continuous loop arrangement, which allows its end to return to the second winch situated next to the first one. Proper tension is applied to the lines to hold the barge in its selected position and, when it must be moved forward or backward under the loading spout, the proper winch is activated to move it in the right direction. As one winch takes in line the other pays it out.

The system works well, with two notable exceptions. Cavitation takes place when the oil is subjected to a vacuum at the inlet of the motor (which is at the time acting as a pump), and vaporizes.

Also, the band-type brakes cause problems. Every time it rained the open bands would swell up and become tight, requiring an employee to be constantly on hand to adjust them. The brakes' actuating cylinders also often leaked.

Searching for a solution, TCS Industrial engineers worked with applications engineers at the local J.N. Fauver Company office. This team analyzed the problem and realized it had two basic options.

One was to build a hydraulic bypass into the system so the motor would not starve or cavitate. This solution has since been retrofitted on units already in the field.

The other option, the one selected for the new system, was to hydraulically disengage the unused motor from the circuit with an Ausco hydraulic clutch. This new design also used a totally enclosed Ausco failsafe brake, which completely eliminates both the adjustment and leaking problem previously encountered when using open-type brakes.

Each of the two winches now includes an overhung load adapter, with the Ausco failsafe brake piggybacked to it. Next comes the clutch and then the motor. Using direct-spline shafts and matched SAE mountings, it really becomes an integral drive train that eliminates the problems previously experienced.

The failsafe brakes are spring applied and hydraulically released.

When hydraulic pressure is applied to a motor through a shuttle valve, the pressure also goes to the brake cylinder and releases the brake discs. When pressure is released the built-in springs automatically re-apply the brake.

The units are completely enclosed, which precludes water from affecting their performance.

The advantages of the system are obvious. Each of the two winches has its own drive train.

To move a barge the operator activates a hand-held, electrical-proportional hydraulic control valve, which releases both brakes so one cable can pay out while the other is being wound on a drum. As the control valve releases the brakes it also starts to direct oil through the hydraulic motors. As they turn, the exiting oil flows over a load control which creates a back pressure signal that is read by the clutch in the winch system that is taking in the line, and it actuates to turn the winch. But the other clutch does not receive such a signal so its hydraulic motor does not turn backwards. Because it is "declutched" the motor rests as the line pays out.

These new changes have solved the problems previously encountered.

The heart of the system is the electro-hydraulic power unit situated at any convenient location at the terminal. In addition to barge moving, the hydraulic circuitry may be configured to provide power for other requirements, such as spout handling or cover pulling. Proportional controls allow a variable-speed movement between 0 to 50 fpm, moving up to four barges at one time. The system provides an efficient and positive method of moving empty or loaded barges between mooring points at a dock, terminal or other marine facilities, whether the duty cycle is continuous or the frequency of movement is intermittent, with local or remote (or both) radio or pendant variable-speed control. 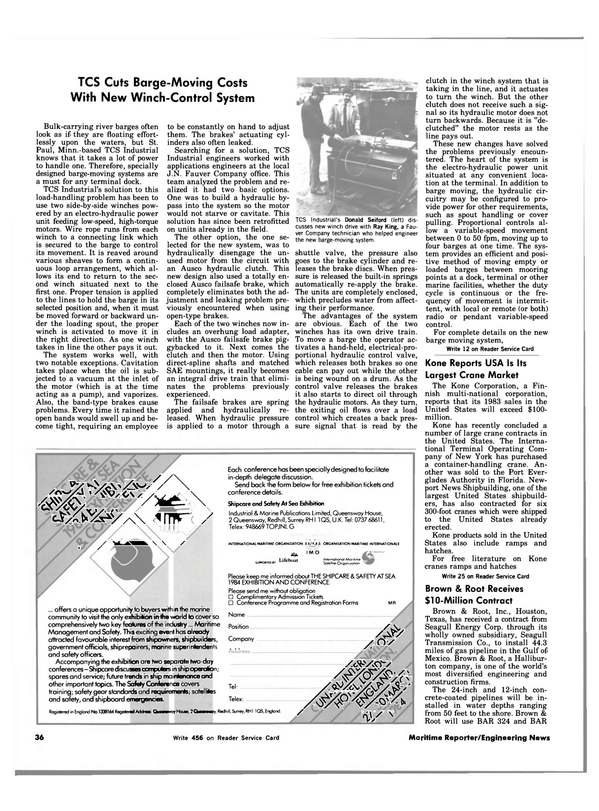