U.S. and Canadian companies have been licensed to manufacture a range of floating drydocks that operate on the submarine principle of using compressed air to blow water from their ballast tanks.

Ammac Welding and Machine Works of Wilmington, Calif., has acquired license rights to build the Australian-design Vickdock, the largest version of which handles vessels of up to 300 tons. Mantle Industries of Delta, British Columbia, Canada, has acquired the rights for both the manufacturing and marketing of the docks, which can raise a 30-ton vessel in 15 minutes and a 100-ton vessel in 35 minutes.

Vickers Cockatoo Dockyard, a member of the British Vickers group of companies and located in Sydney, Australia, has appointed Giannotti & Associates of Houston as manufacturer's agent in the United States and Canada for the Vickdocks. All sales inquiries and administration of orders will be handled by the Giannotti firm.

The docks, which operate faster than conventional drydocks that use pumps to empty their ballast tanks, are operated by one man. A docked vessel is supported by stressed beams and girders attached to the ballast tanks, giving an unobstructed working space without cradle arms and supports blocking the dock floor.

The Vickdock, which does not require supporting shore-based equipment and can be moved readily from mooring to mooring, is aimed particularly at operators of workboats and fishing vessels, and at owners of pleasure craft marinas.

"A 39-foot yacht can be lifted, cleaned and re-landed within 90 minutes using the Vickdock, so it should be well possible to handle five or six vessels in a day," said Graham Cole, a Vickers spokesman.

For additional information on the Vickdock, Write 11 on Reader Service Card 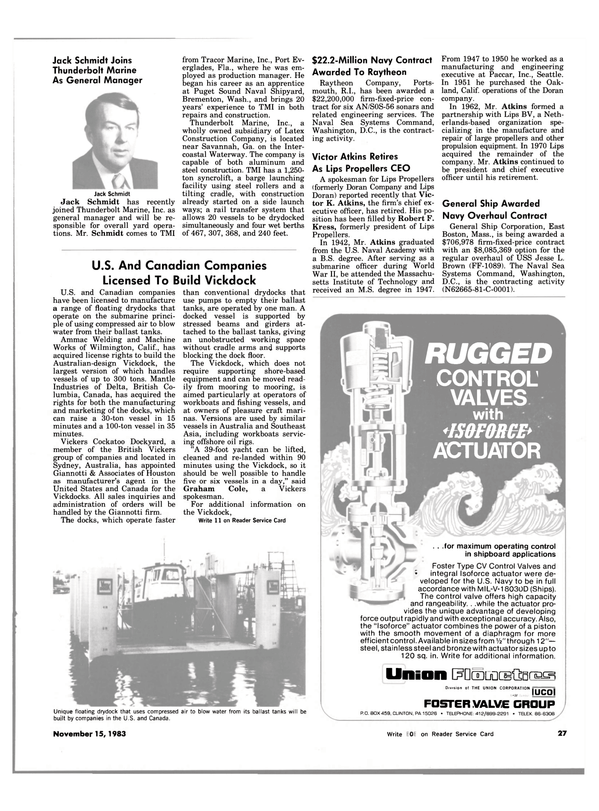