Jeffboat, Incorporated of Jeffersonville, Ind., recently completed the luxury cruise vessel Newport Clipper, first of its type ever built at the Indiana yard. Constructed for Clipper Cruise Line of St. Louis at a cost of about $9 million, the vessel will operate on seven-day cruises in areas along the U.S.

Eastern Seaboard from New England to the Colonial South and South Florida Waterways according to the season, with a winter schedule in the Virgin Islands.

During christening ceremonies just prior to delivery of the new vessel, it was announced that Clipper Cruise Line and Jeffboat had signed a contract for construction of a sister vessel to the Newport Clipper, with delivery scheduled for December 1984 (see photo).

The owner indicated that the second vessel, yet unnamed, will operate on an intinerary similar to that of her sister ship.

The hull of the Newport Clipper is constructed of Va-inch steel plate throughout except for the bow and stern which are %-inch plate. Gross tonnage is 100 and displacement 1,000 long tons. Overall length is 207 feet, beam amidships 37 feet, and draft IV2 feet.

The main engines drive, via two Twin Disc hydraulic reverse/reduction gears with a ratio of 4.13:1, two Columbian four-bladed, stainless- steel propellers having a diameter of 48 inches and 39-inch pitch. The console-mounted steering system provided by SSI has full follow-up control. A bow thruster supplied by Omnithruster is powered by a 200-hp electric motor.

Electric power is supplied by three 225-kw generators given by Detroit Diesel 12V-71 engines. The marine sanitation system is an Omnipure Model RM812-27, Type II. Raw water heat exchangers for engine cooling are mounted on each propulsion and generator unit.

In addition to the usual VHF and SSB communications equipment, the vessel is fitted with two radars, satellite navigation system, and Loran C, all manufactured by Furuno.

The Newport Clipper's four passenger decks contain 51 staterooms, all outside and with large windows. Normal passenger capacity is 100, but 111 could be carried if upper berths that are fitted in some cabins were used. The vessel has a crew of 25, and is of United States registry. 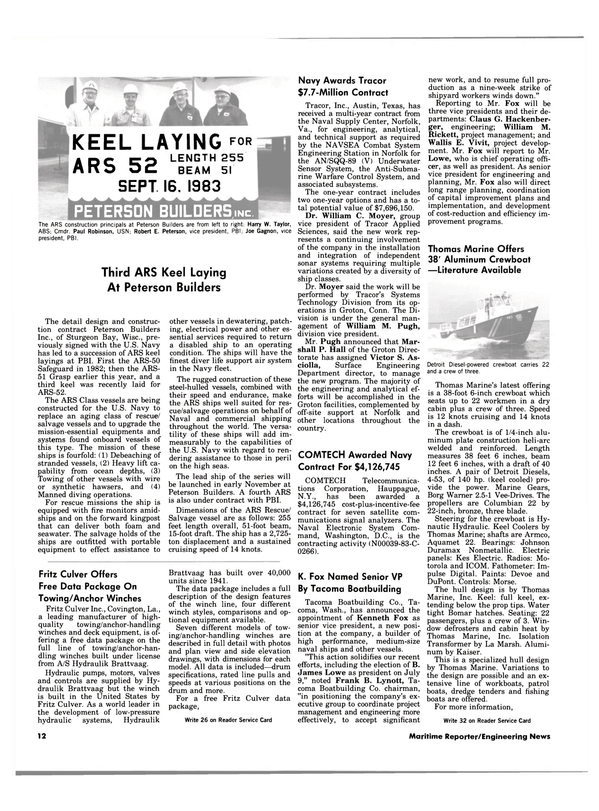