The topping off barge will be used primarily for topping off partially loaded large oceangoing bulk coal carriers of such size that they have too deep a draft to be completely loaded at U.S. coal loading terminals.

The barge will be 550 feet in length and 78 feet in beam and will be fitted with a deep stern notch to accommodate a tug of 7,200 horsepower. With a draft of 32 feet the barge will have a cargo capacity in excess of 36,000 short tons of coal. Nine individual hatch covers will provide ample access to the barge's four cargo holds. It will be equipped with hydraulically controlled skegs to maintain directional stability while under tow; a 1,000-horsepower, fixed-pitch bow thruster will provide additional maneuverability. The barge will also be equipped with a dieselpowered electric generating plant, twin anchors, a double windlass, fendering, and ballasting system.

Bay Shipbuilding's parent company, The Manitowoc Company, Inc., will manufacture the two Manitowoc 4600 Series III clamshell cranes which will provide the barge with self loading, unloading, and transferring capabilities in excess of 1,500 tons per hour. The two 4600's rotate on special 16- foot roller paths mounted atop self-propelled gantries that travel on rails along the length of the cargo hold. Each crane will be equipped with a 140-foot boom, provide a 25-ton clamshell capacity and will be equipped with an elevated operator's module to provide optimum visibility for loading.

The barge will be built under survey and inspection of the United States Coast Guard and to the ABS +A1 Barge classification. 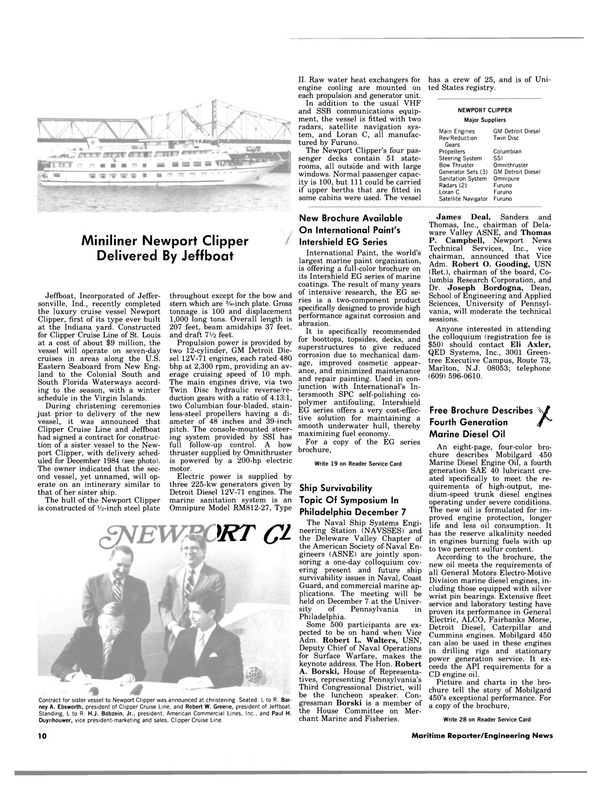