The drydock hull was designed and constructed in accordance with the regulations and under the supervision of the American Bureau of Shipping (ABS). After completion of commissioning trials at Continental Maritime's shipyard in San Francisco, it will be classed +A1 floating drydock by ABS. In addition, it is designed and constructed to meet the U.S. Navy's drydock safety certification criteria published in Military Standard 1625 (B).

Plates for construction were ordered up to 3.75 meters in width and up to 15 meters in length (this limited the average waste for the entire dock to approximately 2.5 percent). These large-size plates were welded from one side with copper rail backing into panels by using automatic welding machines. The frames were welded by using semiautomatic welding machines and a special jig. Similar special-type jigs were used for welding of T girders which serve as web frames or bearers.

The dock sections were constructed in a separate prefabrication shed before transfer to the assembly yard.

The dock was constructed on a horizontal level with the centerline bulkhead resting on the continuous tilting line which consisted of loaddistributing concrete blocks with lowerable sand box equipment. The dock lay with its complete bottom surface on sleeper blocks which were in turn supported by concrete slabs and which could be vertically adjusted and readjusted by hydraulic jacks.

Weld shrinkage was allowed for and the dock is built with considerable hogging which is distributed over the length as a curve and which was maintained by continuously checking by leveling. The maintenance of the hogging along with the weld sequence of the longitudinal and transverse section joints was based on experience and provides the dock with a precisely horizontal keel line when afloat after launching in the "stress-relieved" position, an important factor in proper dock operation.

The order for the new dock was placed with the stipulation that it be delivered and ready for docking a ship as early as May 1985. The decision to use a heavy-lift ship was mainly dictated by this time factor.

Traveling at a speed of 13-15 knots, the ship took the route around South America through the Strait of Magellan.

The dock was loaded on the heavy-lift ship Mighty Servant 3 for the trip to California on March 15, 1985. Prior to the arrival in California, Continental Maritime of San Francisco completed the final preparation to the berth for the dock at Mission Bay Pier 50.

The M.A.N.-GHH Sterkrade staff will commission the dock and perform a part of the tests required for the ABS classification. Keel blocks, bilge blocks, crane and other equipment will be unlashed, placed in operating positions and tested.

Tests already completed at the shipyard in Germany include: tightness test of all tanks, test of the electrical connections and function tests of all machines and equipment. All other tests will be conducted in San Francisco according to a program developed by M.A.N.-GHH Sterkrade in consultation with Continental Maritime and ABS.

Innovative features of the drydock include an advanced system of adjustable keel and bilge blocks developed by M.A.N.-GHH and modified specifically for the docking of U.S. Navy ships with large deadrise.

In addition, the dock has been outfitted with a sonar dome pit, 102 feet by 40 feet by 5 feet. The pit allows shipping or unshipping of the sonar dome rubber window of U.S.

naval ships in a wide variety of docking positions. The dock is outfitted with steel portable transverse girders and heavy plates which are used to cover the pit when not in use. Keel blocks can be placed on this covering structure. The pit provides ample working area around the SQS-26 and SQS-53 sonars installed on U.S. naval combatants, up to and including CG 47 and DDG-51 classes.

The dock incorporates two dock arms which support working cars for personnel working on topsides or superstructure. Each arm travels on a rail system, located on the inner side of either wing wall, and each dock arm is outfitted with an endwork platform. The dock arm position can be controlled from this platform. The working platform is automatically held in the horizontal position.

A high-pressure water blast system is located on the safety deck, port and starboard. Each system includes an electric-drive pump, a water supply tank (with both fresh and saltwater inlets), distribution piping, hose valves, hoses and nozzles.

Water outlet pressure and flow will range up to 10,000 psi and 100 gpm. Pressure and flow characteristics are easily varied with interchangeable plunger conversion sets.

The new drydock is another step by Continental Maritime toward implementing the firm's decision to become a full-service shipyard.

This ship repair firm presently employs 520 people in its San Francisco yard and 430 people in its San Diego yard. The first scheduled drydocking for Mission Bay will be the Ex-President Monroe which Continental Maritime is converting into the Gem State (TACS-2), an auxiliary crane ship. 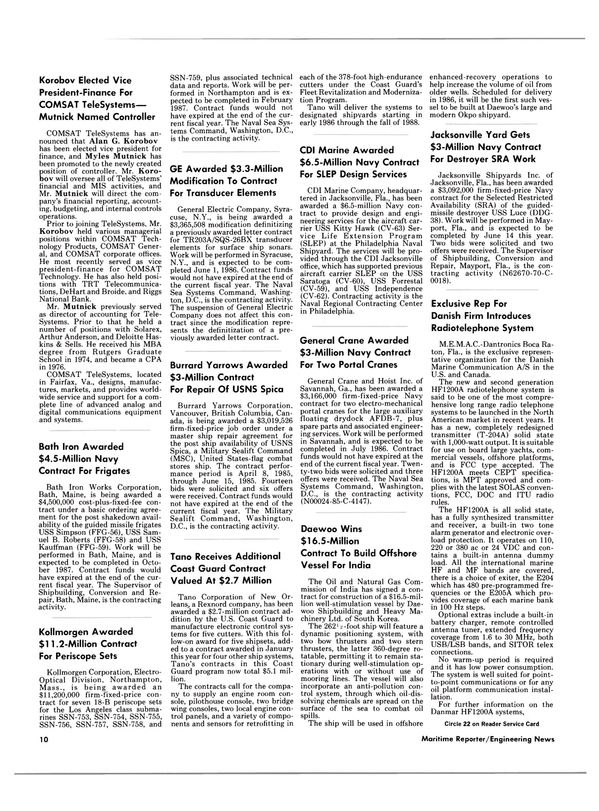