This article deals with the potential for new business from the current U.S. Navy program.

However, as most readers are aware, since the mid-60's, all U.S.

Navy new construction work must be conducted in private shipyards. In addition, aside from about 5,000 U.S. Navy and government ships, there are approximately 45,000 commercial vessels— ocean, coastal and inland— in the United States fleet.

This article provides an overview of future business to be generated by Navy programs. The first section addresses construction and major conversion plans. Ship maintenance and modernization is then addressed.

Ship Construction and Conversion Over the next five years Navy plans to contract for 109 major new ships, 60 air cushion landing craft, and 24 conversions. A $75 billion budget is proposed for this procurement.

Details are shown in Exhibit 1.

In addition to ship procurement Navy plans to spend about $125 billion over the next five years for weapons, electronics, ship support systems, and research and development.

This combined $200 billion—or $40 billion per year—program throws off many significant business opportunities, some of which are described below.

DDG 51—Bath Iron Works in early April won the lead ship contract for the new class of Arleigh Burke destroyers. Over the next decade Navy plans to buy 29 of these ships. Ingalls and Todd-L.A. will probably participate in this program as follow ship builders. The DDG 51 offers all types of subcontracting possibilities.

The lead ship contract is to be awarded in 1989. GD-Electric Boat and Newport News are competing for the lead builder contract. Each submarine is estimated to cost over $1 billion. Up to 100 of this class submarine are planned over a 20 year procurement period. There are many opportunities for prime and subcontract services—particularly for firms involved in high technology electronics and precision machining (especially those with experience in HY 100 steel).

This program will be of interest to yards such as Avondale, Lockheed, Bethlehem-Sparrows Point, GDQuincy, Pennship and NASSCO.

The first two yards have already been contracted to build LSD 41 ships.

LHD 2—A three ship multiyear procurement package is planned for LHD amphibious assault ships in FY 1986. Litton-Ingalls has the contract to build the lead ships in this class. Navy has decided to compete the follow ships. Beside Ingalls this provides an opportunity for yards like Avondale, NASSCO, GD-Quincy, Lockheed—perhaps Pennship, Bethlehem-Sparrows Point.

Support ships—several new support ship programs are planned over the next five years: • a fast combat support ship (AOE 6) is scheduled for FY 1987, followed by one ship per year over the five year planning period • The Hayes (TAGOR 16) will be converted to an acoustic research ship • seven TACS crane ship conversions are planned • more TAO fleet oilers will be built and the current AO 177 class oilers will be jumboized • a new ammunition ship (AE) program is planned to start in FY 1988 • two floating drydocks are to be acquired • a repair ship (AR) is scheduled for FY 1990 Many yards will pursue these contracts.

Machinery manufacturers, engineering firms and a wide variety of equipment suppliers will find business targets in this area.

Landing/service craft—Navy plans to spend $242 million on landing craft and $480 million on service craft over the next five years. Exhibit 2 shows the type of craft now under construction and the current builders.

Electronic systems—Two of Navy's major electronics programs— Aegis and SUBACS—are being opened to second source competitions; • RCA is now the prime contractor for Aegis, which is installed in CG 47 cruisers and (in modified version) is to be the principal systems in the DDG 51. Second source selection of the SPY 1 radar and related Aegis weapon system components will begin this year.

• IBM has been the prime contractor for the $1.7 billion program to develop an advanced submarine combat system.

Navy has now decided to compete the more advanced phases (costing $8 billion + ) of SUBACS development. Companies like Raytheon, GE and Rockwell are expected to be interested in this program.

Ordnance programs—Several very large programs are in progress which offer many subcontract opportunities.

Lockheed is the prime contractor for the $8.5 billion Trident II missile. This program involves numerous subcontractors for system components and engineering services. Martin Marietta and FMC-Northern Ordnance are supplying the vertical launch system.

Numerous subcontract manufacturing and machining opportunities are available. Boeing is scheduled to begin full scale development of the ASW stand-off weapon later this year. This is a multibillion dollar program which offers all types of subcontract possibilities.

Firms in countries with whom the U.S. has a memorandum of understanding or offset commitment have particular opportunity— as they compete on equal terms with U.S. manufacturers.

Navy plans to spend $6.1 billion on ship maintenance and moderni- zation next year. The breakdown of this budget and comparison to previous years is shown in Exhibit 3.

The decline in the number of overhauls over the past five years is obvious. In FY 1982 Navy spent $2.2 billion to perform 63 overhauls.

Submarine overhaul—A substantial portion of the FY 1985 and 1986 overhaul budget is committed to nuclear submarine overhaul. Six of the eight naval shipyards (Philadelphia and Long Beach are not nuclear qualified) are booked solid with nuclear submarine work over the next few years. Newport News is the only commercial yard able to perform this work. At $100 million + per overhaul, this represents important business to Newport News.

Homeport policy—Navy's policy is to restrict short duration ship maintenance jobs to homeport area shipyards. This greatly affects the work distribution as 70 percent of the fleet is highly concentrated in five homeports: Another Navy policy has been to lengthen the cycle between overhauls.

To maintain ships between these extended overhauls more work is being performed during short selected restricted availabilities (SRA's). As a result yards in these five areas have a unique opportunity to capture most of the growing amount of short term maintenance jobs.

A similar test is planned using two FF 1052 overhauls on the East Coast.

I M A Detailed Assessment of Future N a v y Market Readers interested in knowing more about the future Navy market may wish to obtain two reports recently prepared by IMA: • U.S. Navy Procurement— published in May 1985, this 220 page report is a professional, thorough assessment of the future $40 billion annual U.S. market for ships, ship systems and weapons.

Each of these reports (including four quarterly updates) is available for $480. If ordered together both are available for $750. To order please contact International Maritime Associates, Inc., 1800 K Street N.W., Washington D.C. 20006.

The world fleet has continued to decrease, although new deliveries are keeping almost abreast of scrappings and casualties. It is interesting to note that the fleet increased by 100 million gross tons every five years from 1969 to 1979, but is now only 5.5 million gross tons higher than it was in 1979.

However, it should be noted that almost 2.5 million gross tons of the total for 1983 was an unprecedented order for bulk carriers. The rate of ordering, on a quarterly basis, has shown a steady increase throughout the year.

Except for 1982, the amount of tonnage ordered annually has remained fairly static since 1979, though the fortunes of the tradition- al shipbuilding countries fluctuate from year to year.

Japan and South Korea continue their current domination of the market, taking 73 percent of the new orders placed; just under 10 percent went to EEC member countries.

China (including Taiwan) has increased its share of orders for the second year running (Table 4).

A difficult situation in Finland was averted by the USSR bringing forward orders that would not normally have been placed until 1986 under the next five-year plan. This enabled Finnish shipbuilders to maintain their production sched schedules.

A notable order was for the hulls of two 52,000-shp nuclearpowered icebreakers; the reactors and propulsion machinery are to be installed in Leningrad.

The decrease in Poland was mainly due to the absence of orders placed by Western countries. In addition, reports of orders recently placed by owners from the Communist bloc may not be completed.

During the year, the first purpose- built tanker/processing/storage vessel was ordered in Japan by Norwegian owners for delivery in 1986.

Comparing the leading shipbuilding countries of five years ago with those of today, it can be seen that Japan and South Korea have greatly increased their orderbooks, while the U.S. and Brazil have shown a decrease of more than a million gross tons. Other countries showing a decrease include France, Poland, the United Kingdom, Spain, and Sweden, while Denmark and Finland are at about the same level.

The current delivery schedule shows a contracting orderbook, with few contracts placed for delivery beyond 1986 (Table 3).

Principal countries of disposal for demolitions during 1984, which are estimated to be on the same 16.5 million gross ton level as the previous year, were: China (including Taiwan), 49 percent; South Korea, 24 percent; Pakistan, 7 percent; Japan, 5 percent; Spain, 4 percent; and other countries, 11 percent. 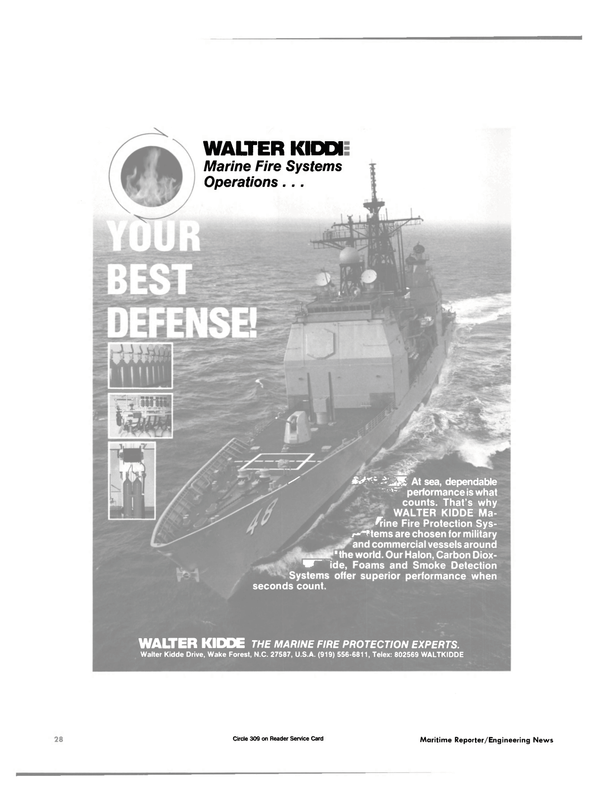 Other stories from June 1985 issue