THE GOVERNMENT AS PARENT TO INDUSTRY: PARTICIPATION OR BENIGN NEGLECT?

There is an element in our political tradition which holds that government is, and appropriately ought to be, the parent of industry. All protestation to the contrary government, like a parent, has the capacity to nuture, encourage, build up, level, discourage or ruin industry—its child. One may like to believe that such a relationship is not proper, that it is antithetical to free enterprise, or that it is simply not the case that such a familial pact exists between business and government, but any objective examination of the facts, of our history, emphatically proves otherwise.

That said, what is the proper relationship of parent to child, of government to industry? Certainly not to abuse, likewise not to pamper.

Certainly not to ignore, likewise not to regulate intrusively.

Speaking specifically to the transportation industry in its various modes, what is the proper role of government in assuring not only the smooth functioning of the total system, but likewise the equitable treatment of its component parts and the safeguarding of the public good? The answer simply: the absolute minimum role possible to achieve those very laudable aims. It was Thomas Jefferson who remarked that "the government which governs best governs least." But, what does this mean in the practical, hard knocks world of modern business? I will address this question specifically as it regards the American waterway system.

Unfettered competition is the centerpiece of the waterways industry, providing a choice for shippers of the bulk products which fuel our economy. Lower prices resulting from this competitive choice ultimately benefit the individual American consumer. We carry 13 percent of the nation's freight for 2 percent of the national transportation cost.

We are the most efficient, safest and least expensive mode of transport.

Our industry has also been a vital adjunct to our armed forces in times of war.

These benefits to the nation not withstanding, we are a deeply troubled industry. The barge and towing industry has not come back with the general economy. We are in a depression, not a recession, and we are not recovering.

Witness a study conducted by the renowned accounting firm of Arthur Anderson & Co. That firm gathered financial data from 15 of the largest inland barge companies. In 1980, these companies earned an aggregate profit of $130 million on $1.1 billion in revenue. In 1982, these same companies lost $30 million. In 1983, they lost over $40 million.

Mind you, these are among the largest companies. You can imagine how the little fellows have fared. Bankruptcies abound. The downward spiral is unmistakably clear.

Our industry is dependent upon bulk products, largely petroleum, coal and grain. All three commodities are depressed.

grain for export. In 1980, before the embargo was imposed, the U.S.

shipped 20 million metric tons of grain to the USSR. That went to zero until 1982 when the Reagan Administration signed a new agreement with the Soviets to ship 8-12 million metric tons. It will be very difficult to recapture the market share we once had. The Soviet's, to protect their own interests, have diversified their purchases to include Australia, Canada and Argentina.

And, the economies of the western nations and Japan have lagged behind our own, in growth.

Furthermore, there is a vast surfeit of equipment in the industry.

We are now over 15 percent overbuilt.

What then is the proper role of the federal government in the affairs of the waterways industry?

That depends on who you talk to.

Ideally, our transportation network should exist today as a balanced system. No single mode should reign supreme. All forms— rail, water, motor, pipeline, air— have integral roles to play. Each is a vital link in the chain.

Historically, the uniting force provided by transportation has been stimulated, encouraged and supported by the federal government.

As far back as 1787, the Northwest Ordinance stated, "the waterways shall forever remain free," thus recognizing the public benefits flowing from this national treasure. So, too, our government nursed the infant railroad industry through federal land grants beginning in 1850.

The operation of the modes born in the 20th century; trucking and the airlines, also stimulated the material instincts of the federal government.

Under one of the programs begun by President Franklin Roosevelt in 1934, called the Civilian Works Administration, 500,000 miles of railways were built or improved as part of his program to cure the devastating unemployment of the Depression. President Eisenhower followed that with the mammoth interstate highway network, begun in the 50's.

Later, the government subsidized the regional airport program, building 500 new airports as well as the upgrading of an equal number.

It is the possible weakening and eventual collapse of the waterways link, the oldest and most venerable of the links in the transport chain, that concerns me. It is the singular ability of the water mode to provide a shipping option for such crucial commodities as petroleum (and its byproducts), coal, chemicals and fertilizers, grain, sand, ore, gravel and lumber, that makes barge carriage so attractive. If this most efficient form of transport—the barge industry—were removed from the overall traffic system, there would be a marked and immediate increase in the cost of some of the necessities of life—electricity, cereal, gasoline, automobiles and housing.

Unfortunately, the future ability of the barge and towing industry to continue to offer bargain transportation for these vital commodities is presently being threatened by misguided legislative and executive branch initiatives. Mindless attempts to impose higher levels of user taxes on the navigation industry, the loosening of the protections now afforded shippers and our industry by the Panama Canal Act are the two looming threats to the foundations of this industry.

For three quarters of a century, the Panama Canal Act was unchallenged.

Then, in June of 1983, the CSX rail corporation announced its intention to purchase Texas Gas Resources with its huge barge subsidiary: American Commercial Barge Lines. The case was argued for six months before the Interstate Commerce Commission. On July 24, the Commission voted 4-0 to permit the merger, thereby standing the law on its head. The final disposition of this landmark matter is before the courts and its efficacy willultimately be decided by the judicial branch.

Other marauders on the loose threatening the barge industry, and therefore, the American consumers' pocketbook, are some government officials who, blind to all reason, pursue the imposition of even higher user taxes on this industry. We are awash in studies which show high user taxes will surely harm U.S.

According to the Department of Commerce, through May of 1984, coal exports had exceeded the 30 million ton mark and were running ahead of the previous year, but only slightly. The international coal market is very tough, very cutthroat.

Here, the barge industry can have a positive impact in reducing the total price of this important commodity.

If we are permitted to freely compete.

History reveals that where railroads have to compete directly with barge lines to haul coal traffic, miraculously, the rail rates are reduced to meet the barge competition.

According to published Tennessee Valley Authority statistics, the rate for shipping coal by rail from Coalmont, Tennessee to Birmingham, Alabama, is $20.10 per net ton where the railroads face no competition from the waterways. The identical shipment costs $15.14 per net ton where waterborne competition comes into play, a difference of $4.96 per net ton. Such water-compelled rail rate reductions range from 40-110 percent, and using the rail industry's own estimate, force the railroads to charge almost $1 billion less per year—industry wide—for shipment by rail.

Despite these figures, government seems bound and determined to increase barge taxes. The barge and towing industry can perhaps be forgiven for feeling as though the government, in exercising its role as the parent of industry has demonstrably, and rather blatantly, favored one of its children over the other.

This is, categorically, not the proper role of government in the commercial sphere. Where government involves itself in the affairs of its children in industry—once they are grown and on their feet—that involvement must be one of almost pristine impartiality.

Let us leave the realm of user taxes on our industry and the realm of the "Johnny can do no wrong" policy of the government as far as the rails are concerned regarding the gobbling up of competing barge lines—in direct contravention of the law and polite custom—and have a look at government tax policy as it relates to the rails. Bear in mind that the government proposes higher taxes for the barge operators who are struggling to stay afloat and draw your own conclusions regarding the equity of the government's tax policy regarding the rail carriers— most of the largest of which find themselves in the financial pink since the passage of the Staggers Rail Act of 1980, despite being found to be not "revenue adequate" by the government. Briefly, this determination means that the rail carrier is, in the view of the government, unable to make basic costs and a reasonable profit on capital outlay.

Witness the financial condition of CSX Corp. In taxable years 1981- 1983, CSX Corp. not only paid no federal tax whatsoever, on profits of 1.75 billion dollars, but received rebates of taxes paid in earlier years or sold "excess" tax benefits to the extent that the corporation actually got money back from the federal government.

Then there is the Santa Fe Southern Pacific Corp., another railroad judged to be revenue inadequate by the government, despite profits in taxable years 1981-1983 of 1.5 billion dollars, on which the company paid absolutely no federal income tax and was sent a very substantial rebate check by that same government.

Witness also Norfolk Southern Corp. Needless to belabor the point—Norfolk Southern is, of course, revenue inadequate. This despite profits in taxable years 1981-1983 of a respectable 574 million dollars.

Where is the fairness in all this?

Our national leadership must recognize the severity of our waterway industry's plight, and consider the crucial role we play in the transportation system and the overall economy.

Laws and regulations must be directed at protecting the public and nurturing the industry, and not at inhibiting it any further. How can reasonable people possibly advocate still higher user fees in light of the disastrous data on the financial condition of the water carrier industry borne out in the Arthur Anderson study and other independent surveys concerning the economic health of our industry?

If, as I contend, the proper role of government in our mixed economy is to promote a healthy, balanced system of transportation, and do so with only the minimum intrusion necessary, then something is rotten in Denmark regarding the relationship of the water carriers to the government.

How we fell from dad's grace is anyone's guess, but if a reconciliation is not forthcoming fast, one son of government, once a master of the water, is going to die of drowning.

And it will not be an accidental death. 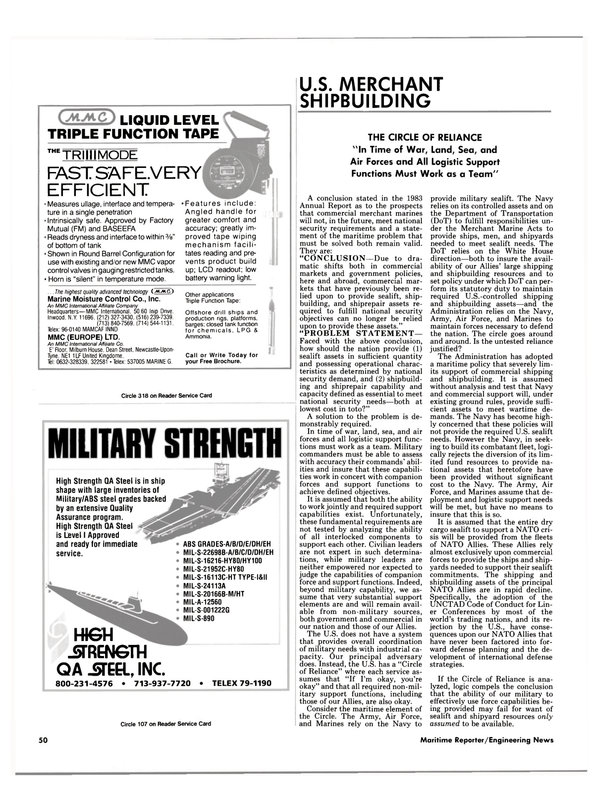 Read THE GOVERNMENT AS PARENT TO INDUSTRY: PARTICIPATION OR BENIGN NEGLECT? in Pdf, Flash or Html5 edition of June 1985 Maritime Reporter

Other stories from June 1985 issue