Free Literature Available Increasing containerization in shipping has necessitated the development of a number of advanced ship-mounted loading systems to shorten berthing times in port and to make cargo-handling more costeffective.

One of the developers of new and innovative cargo-handling equipment is Lubeck-based O&K Orenstein & Koppel AG Tagebau und Schiffstechnik. Building deck cranes since 1965, the West German company has developed a number of highly advanced cranes. The company offers single or double deck cranes and double joint and gantry cranes in electrohydraulic or all electric models with lifting capacities from 5 to 100 tons.

In 1975, O&K introduced its second generation of twin deck cranes.

Their patented design allows slewing assembly to serve all functions, and the slewing gears engage single and in twin crane operation.

The order comprises four Gemini double deck cranes with a hoisting capacity of 2 x 18 tons each, at 83.3 feet outreach. In double crane operation, loads of up to 35.4 tons per double crane can be lifted. This crane concept allows rapid handling of pallets, as well as 20- and 40-foot containers.

In a unique installation, two O&K container deck cranes were fitted aboard American shipowner Matson Navigation's recently delivered container barge Islander. Each of the cranes aboard the 387-foot barge has a lifting capacity of 40 metric tons at a working radius of 30 meters, and is equipped with a load turning device, telescoping spreader and computerized program control.

The cranes will allow the handling of containers independent of quayside facilities.

In 1982, O&K achieved a major technological breakthrough with the introduction of the double-jointed cranes for on-board container handling.

The first installations of O&K double-joint deck cranes were fitted aboard three Indonesian-owned containerships, the Majapahit, Jayakarta and Gowa, built by Flensburgher Schiffbau-GmbH, Flensburg, West Germany. Each of the vessels was fitted with two doublejoint deck cranes with 35-ton capacities.

The essence of the O&K concept is that the two joints allow container movement through the arc of a circle, whereas standard luffing cranes move cargo around the circumference of a circle. O&K claims that its double-jointed cranes can achieve almost double the load cycles possible with standard cranes.

The unique design of the crane features a glare-resistant crane operator's cabin, which is attached under the articulated jib. This position provides the operator with an excellent field of vision and enables him to handle cargo onboard and outside the ship without the assistance of auxiliary personnel.

The O&K production program includes models with lifting capacities of 25 and 35 tons under the spreader and maximum outreaches ranging from 79 to 144 feet.

The Ferrostaal Corporation is the exclusive agent for O&K in the U.S. 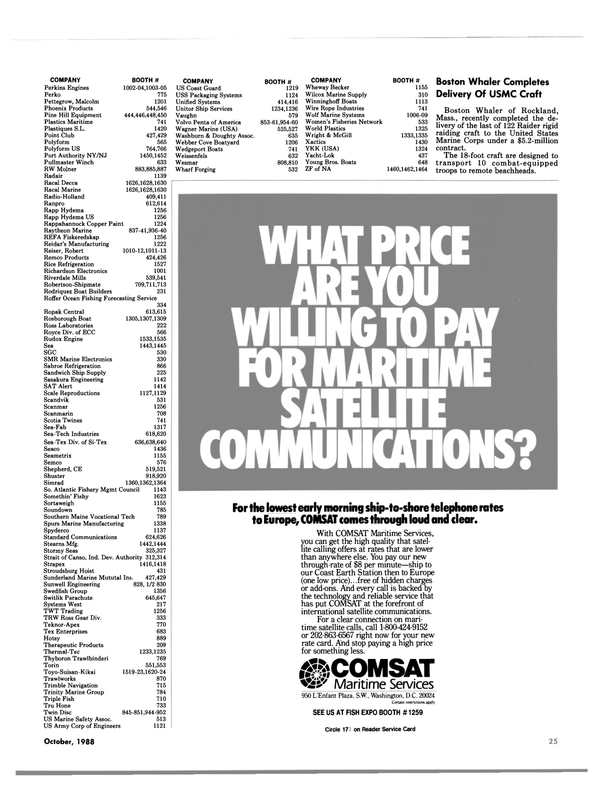