The merits of MAN B&W Holeby's L28/32 auxiliary engine series— one of the world's most popular heavy fuel-burning genset drives—have been enhanced by some recent significant design modifications.

The fuel economy has been substantially improved, and the reliability and durability of the new model promise to be even better than its market-leading predecessor.

The upgraded L28/32 is already in service or ordered for a number of prestigious auxiliary power installations.

Market response is reflected in an order backlog totaling 125,000 bhp at the Holeby factory as of June 1 this year, with deliveries scheduled well into the summer of 1990.

A major contribution to improved performance and reliability also stemmed from redesigning key engine components for a maximum firing pressure of up to 150 bar. Production engines, however, will still be released for operation at the original 130 bar rating. The resulting higher safety factor ensures low maintenance demands and extended durability from a design running well within its margins: a desirable feature not shared by some other engine designs, which are required to operate at or near their design limits.

Components benefiting from redesign include the cylinder head (still of high strength cast iron but with an improved stud securing arrangement to accept higher pressures), engine frame, cylinder liner, piston and connecting rod. The crankshaft was also modified and the bearing area increased by approximately 6 percent.

Exhaust valve durability is enhanced by the higher thermal efficiency of the engine which yields valve temperatures some 50 degrees C lower than those of the original design.

The flexibility of the program is enhanced by MCR and ECR options already familiar on equivalent MAN B&W propulsion engines. The choice of an ECR output (about 80 percent of MCR) yields the minimum fuel consumption while retaining the capability to switch to MCR mode. Up to 30 percent spare capac- ity can thus be integrated at the newbuilding stage, ready for tapping to meet higher electricity load demands at any time during the ship's service life. The conversion is simply effected onboard by rematching the turbocharger and adjusting the valve gear.

Ships already benefiting from the new 28 series include the 3,900-TEU Marchen Maersk, the first of nine advanced containerships for A.P.

Moller. The auxiliary power package includes three 8-cylinder 28/32- based generating sets. Among the order backlog are 5-cylinder sets (20 in all) for six Del Monte reefer vessels booked from Astilleros Espanoles.

Improved engine design is complemented by recent investment in sophisticated flexible manufacturing systems at the Holeby factory to promote economic and efficient production. 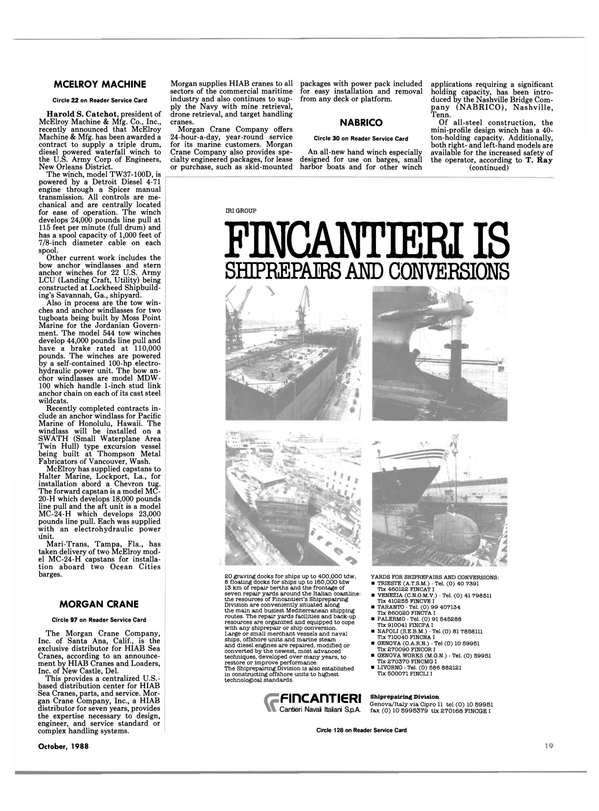