According to Arthur J. Haskell, senior vice president, engineering and marine operations, the three yards were selected based on their ability to submit design proposals to meet Matson's requirements, interest and intended approach to the project and financial capabilities.

The vessel is intended for Matson's West Coast-Hawaii service.

Under the Jones Act of 1921, all vessels intended for use in the domestic market must be constructed in U.S.

The single-screw vessel is expected to be powered by a diesel engine in the "40,000-horsepower range." She will have a service speed of about 22.5 knots and a maximum speed of 23.5 knots and will be able to carry 400 refrigerated containers.

Based on developments in the container industry, the ship will have the flexibility to accommodate containers of various sizes up to 48 feet in length.

The RO/RO section at the after end will include a 500-car enclosed garage and capacity for trailers and oversized vehicles.

According to Mr. Haskell, Matson intends to construct the vessel with funds from the Capital Construction Fund, and they have informed the Maritime Administration of their intentions.

The Capital Construction Fund (CCF) Program was established under the Merchant Marine Act of 1970. It assists operators in accumulating capital to build, acquire and reconstruct vessels through the deferral of Federal income taxes on certain deposits, as defined in Section 607 of the Merchant Marine Act, 1936, as amended.

The CCF program enables operators to build vessels for the U.S. foreign trade, Great Lakes, noncontiguous domestic trade (e.g., between the West Coast and Hawaii) and the fisheries of the U.S.

"This program is a logical add-on to the growth in our trade," said Mr.

Haskell. "We will need the additional capacity based on our projections for 1991. She should take care of our needs into the early 1990s," he said.

Matson currently operates a fleet of six modern vessels, including four containerships and the combination container-trailer carriers Matsonia and Lurline. 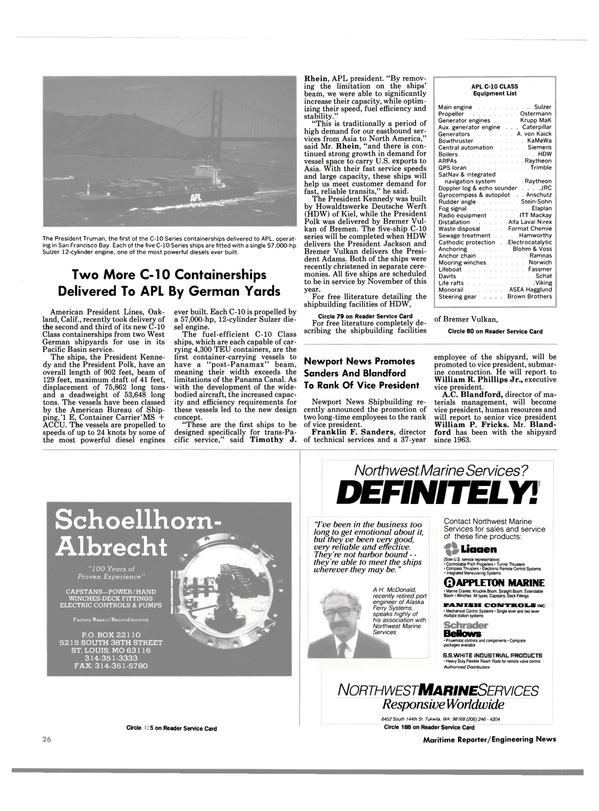