If foreign shipbuilding subsidies are eliminated or substantially reduced, U.S. shipyards have the potential to compete successfully with Northern European yards for construction of U.S.-owned commercial tonnage by the mid-1990s. This was the conclusion of a paper delivered at a meeting of the Society of Naval Architects and Marine Engineers (SNAME) held recently in San Diego, Calif. The paper was prepared by Jay Carson, an associate of Temple, Barker & Sloane, and consultant Barbara Lamb.

The international shipbuilding situation has changed markedly from that of the early and mid- 1980s, the authors say, resulting in an improved competitive situation for the U.S. shipbuilding industry.

Appreciation in foreign currencies as compared to the U.S. dollar, coupled with sharp increases in shipyard labor costs abroad, have driven shipbuilding costs up in foreign yards. In the United States, however, construction costs have gone down and shipyard labor rates have remained stable.

Furthermore, whereas throughout much of the 1980s many foreign shipyards endeavored to bid at or below costs, ship prices internationally are now on the rise. In fact, they have almost doubled in the past five years and are predicted to increase even more during the 1990s. For example, a very large crude carrier (VLCC) built in the Far East and priced at $42 million in 1984 costs the shipowner about $80 million today.

Currently, the U.S. and Northern European shipyards have similar total costs for construction of a new ship. Although the European yards have overhead and productivity advantages, these are offset by labor rates that are significantly higher than those of U.S. yards. Nevertheless, the study authors warn, "without U.S. Government assistance to eliminate foreign subsidies, a substantial price differential between the U.S. and its nearest competitors is expected to remain." While U.S. price competitiveness improved during the 1980s, the lack of commercial orders slowed the pace of product improvements in U.S. shipyards as compared to foreign yards. Although U.S. yards have implemented advanced methods (i.e.-modular construction) in building naval ships, they have not had sufficient opportunities to become skilled in applying advanced methods to commercial shipbuilding, the paper reports.

Mr. Carson and Ms. Lamb see the potential market for American shipyards as U.S. owners of foreignflag and U.S.-flag ships. Thus, the available market in the 1990s are the U.S. owners of the 10.4 million gross tons (gt) needed to replace the 300-plus, U.S.-controlled and U n - registered ships that are currently 15 years of age and older (assuming a 25-year life span). This includes the 86 ships, totaling 2.14 million gt, in domestic (Jones Act) commerce.

Currently, there are 41 ships— mostly product tankers—in the Jones Act trades that are already over 25 years of age. However, today's charter rates are not high enough to support newbuildings to replace these aging tankers.

In addition to the ships engaged in the U.S. domestic trades, there are 76 large, oceangoing barges that are at or approaching obsolescence.

Although not all of these vessels may be replaced with new, similar vessels, at least some will. According to the study, replacement tankers and barges for the domestic trades represent the primary commercial opportunity for U.S. shipbuilders in the 1990s. The best long-term opportunities for U.S. yards, however, are the more sophisticated ships engaged in international commerce.

This presents a strategic dilemma which U.S. shipbuilders will have to resolve in order to determine the marketing focus and research and development emphasis throughout the 1990s.

Another problem facing the yards will be lack of skilled shipyard workers. "Manpower constraints, rather than facilities, will limit the ability of U.S. shipbuilders to meet the possible demand for commercial ships in 1990s," the authors of the SNAME paper say.

shipbuilders to achieve competitiveness in the commercial market by the mid-1990s: (1) decide upon the market segment and ship types on which to focus; (2) determine a feasible price structure for the ships; (3) develop a program to radically improve productivity in building the ships; (4) import established state-of-the-art designs or develop standard designs; and (5) actively promote the product to targeted shipowners.

The authors call on the federal government to investigate improving methods of promotion that would stimulate the replacement of U.S.-flag ships, resume funding for commercial shipbuilding research under the National Shipbuilding Research Program, and aggressively pursue the elimination of foreign shipbuilding subsidies.

In addition, the analysts also have suggestions for shipowners: develop a long-term ship replacement plan, communicate this plan to shipbuilders, and accept that standard designs are the most cost-effective way to meet their transportation needs.

*Editor's Note: This article originally appeared in the October 12 issue of Shipyard Weekly, the weekly publication of the Shipbuilders Council of America, Washington, D.C., an organization whose members and affiliate, allied industry and associate members include major American shipbuilders and repairers, equipment manufacturers, naval architects and marine engineers. 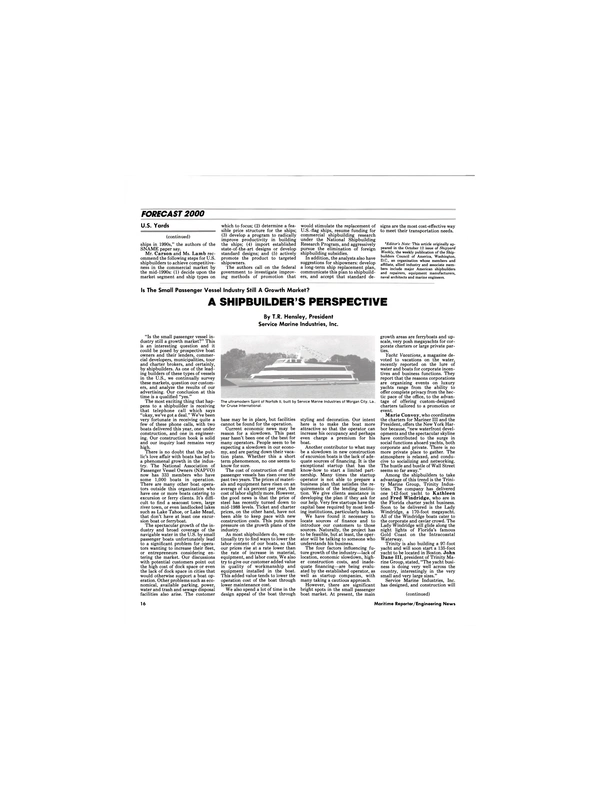 Read U.S. YARDS COULD COMPETE WITH EUROPE IN 1990s* in Pdf, Flash or Html5 edition of December 1989 Maritime Reporter