Wartsila Diesel Vasa type engines have been recently installed in three fishing vessels for Seattle-based owners. In each case, older less efficient engines were replaced by Wartsila Vasa diesel for use as the main propulsion machinery.

The first vessel, the F/V American Eagle owned by American Eagle Associates, was repowered with a Wartsila Vasa 8V22, producing 1,768 bhp at 1,000 rpm. The engine will be used to drive a controllablepitch propeller and a 600-bhp power takeoff from the free end of the engine which will be connected to a series of hydraulic pumps.

The second vessel, the F/V Viking owned by Westward Trawlers, was also repowered with a Wartsila Vasa 8V22 with the same output. The Wartsila Vasa 8V22 is widely known as one of the most efficient and compact fishing boat engines in its output range.

The third vessel, the F/T Endurance owned by Alaska Trawl Fisheries, was repowered with two Wartsila Vasa 12V22 main diesel engines, each developing 2,652 bhp at 1,000 rpm. A power take off of 1,100 bhp is arranged off the free end of each engine; it will drive a shaft alternator for electricity generation.

Wartsila Vasa engines were chosen because of their excellent fuel efficiency and low spare parts consumption.

Wartsila Diesel is one of the world's largest suppliers of mediumspeed diesel engines. The company has production plants in Finland, Sweden, Norway, France, and Spain. Wartsila has licensees in Brazil, Korea, and Indonesia, and a worldwide sales and service network.

In the U.S., Wartsila Diesel is represented by Wartsila Diesel Inc., with its main office in Chestertown, Md., and service centers in Seattle, New Orleans, and San Juan, Puerto Rico. 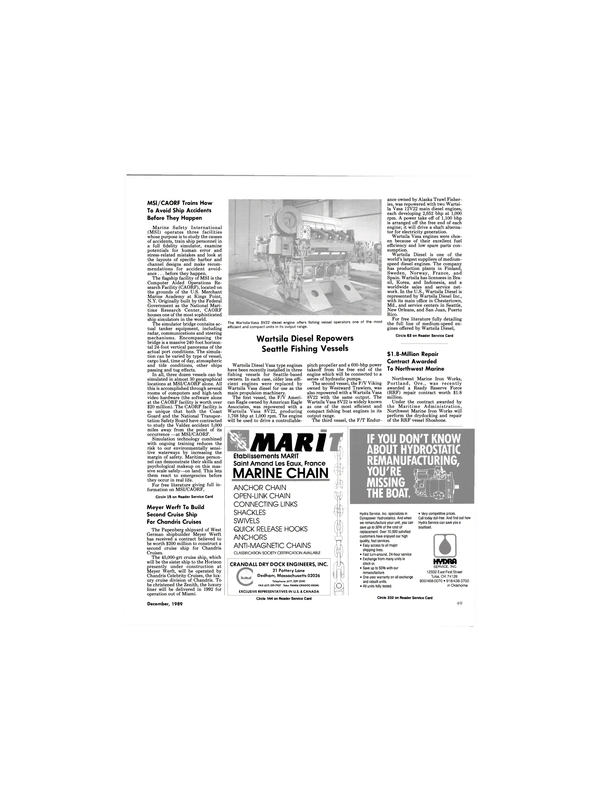