The only U.S. Navy Surface Effect Ship, the SES-200, recently completed sea trials following her refurbishment at the Textron Marine Systems shipyard in New Orleans, La., where she was originally designed and built.

"This 160-foot, advanced technology test bed is capable of speeds over 40 knots, has a range of 2,000 nautical miles and has a significant payload," said John J. Kelly, Textron Marine Systems president. "Its large deck area and below decks volume, along with the excellent motion and stability characteristics of its SES hullform, allow it to be used primarily as a testing platform for government projects, such as evaluating various weapons systems elements.

It is ideal for coastal or open water applications," Mr. Kelly added.

The SES-200 is a waterborne, airsupported craft with catamaranstyle rigid sidehulls. The SES-200 uses a cushion of air trapped between the sidehulls and flexible bow and stern seals to lift most of the hull clear of the water. The resulting reduction in drag produces greater efficiency and higher speeds. A portion of the sidehull remains in the water for propulsion and aids in maneuverability and stability of the ship. The air cushion maintains a smoother and better ride with almost none of the slamming characteristics of other conventional craft.

Following her conversion, the SES-200 has an overall length of 162 feet, beam of 41 feet and displacement of 250 tons.

In 1990, a $1.8 million contract was awarded to Textron Marine Systems by the U.S. Army Corps of Engineers for the conversion, modification, and upgrading of the SES- 200 propulsion systems and hull structure.

The conventional propellers and diesel engines were replaced by two MTU 16V 396TB94 diesels using two ZF BW755 gearboxes and driving a twin KaMeWa 71S62/6-SII waterjet system. The propulsion power increased from 3,200 to 6,960 hp and the speed of the SES-200 is now in excess of 40 knots in calm water.

"The conversion has increased maneuverability," said Mr. Kelly, "resulting in reduced underwater radiated noise, and now allows the ship to operate in shallower water." The SES-200 is homeported at the David Taylor Research Center, located at the Naval Air Station, Patuxent River, Maryland, on the Chesapeake Bay. The DTRC, the Navy's laboratory for advanced naval vehicle development, will deploy the craft in further evaluation programs under the Navy project office PMS300.

This is the third consecutive year that Textron Marine Systems has been selected as the Navy's lead LCAC contractor to manage the centralized procurement of this equipment.

Textron Marine Systems has delivered 21 LCACs to the Navy, two are currently in test and 22 are in production. 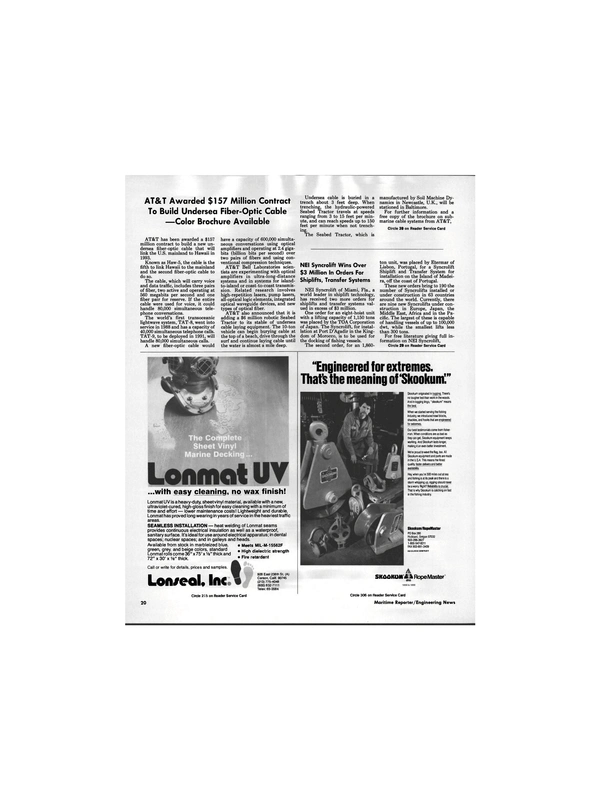