Finnish design specialist Deltamarin is synonymous with advanced cruise ship design and construction. The company, as has many of its colleagues in this country, have built a formidible empire of accrued cruise shipbuilding knowledge and experience which it has used to remain a key player in the international cruise market. But as the cruise industry stumbles, so too do the myriad of companies which serve it. While an extended downturn is not generally forecast, Deltamarin must find new business to keep its 320 employees busy and its sales at or near its 2001 mark of nearly $26 million. To do this, it has trained its sites on expanding both regionally and by vessel niches served, with a move to China fulfilling the former and a renewed focus on offshore, megayachts and chem carrier sectors to fulfill the latter.

In assessing its immediate business prospects, the company sees China as a perfect fit for extending its Basic Design end of its business, an area that accounted for 22% of its turnover in 2001. In China, we would like to become the preferred consulting and naval architecture firm for western owners building advanced ships, said Markku Kanerva, the company's director of business development. The company currently has a representative in Shanghai, but has plans to open an office in China "very soon." The company seems well on its way to fulfilling the vision, with burgeoning business in China. DeltaMarin is involved with the construction of a series of six 8,000 dwt RoRo paper/trailer carriers for Nordic Forest Terminals (Sweden) under construction at Jinling Shipyard in Nanjing, China. The project to build the 528-ft. (160.5 m), 20-knot, 12,600 kW ships was begun three years ago. More recently, Deltamarin signed a contract with Jinling for design work on the 5,200 dwy high heavy vehicle/RoRo car carrier to be built for SeaPlane One of France. SeaPlane One is a joint venture of Louis Dreyfus Amateurs from France and Leif Hoegh ASA of Norway.

For this project — a 492-ft. (150 m), 21- knot vessel — Deltamarin will prepare for the yard the complete basic design for general, hull, outfitting, accommodation, machinery and electric, including approvals. The vessel is specially designed for carrying aircraft parts fabricated in different countries in Europe for Airbus A380 planes, which requires a specialty vessel offering low humidity in the cargo spaces and good seakeeping. 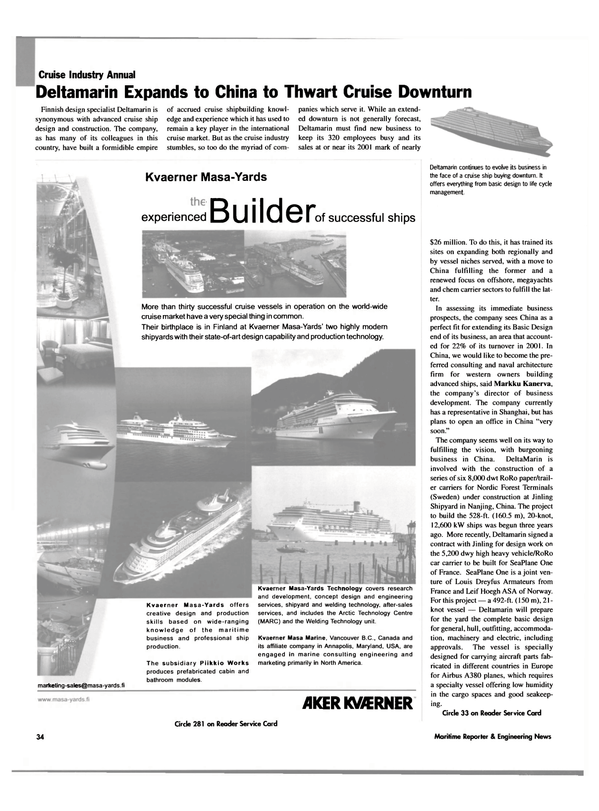