Three 400-ft. (122-m) PacifiCat-class fast ferries capable of carrying 1,000 passengers and 250 vehicles at speeds of up to 34 knots will be sold at an international, unreserved public auction at 11:00 a.m. PST on March 24, 2003 at Canada Place, Vancouver, by Ritchie Bros. Auctioneers. The aluminum vessels, PacifiCat Explorer, PacifiCat Discovery and PacifiCat Voyager, are among the largest catamaran fast ferries in the world, designed by Phil Hercus of Incat Designs, Sydney, Australia, and built in British Columbia, Canada. The PacifiCat fast ferries can be remotely monitored in real time for position, speed, trim, jet angles and rpm; a 287 kW bowthruster improves maneuverability at low speeds; and an integrated bridge system allows enhanced safety monitoring, control and crew deploy- ment. Each vessel is fitted with a 75 sq.

Bidders will also be able to participate in the auction over the Internet using the rbauctionBid-Live service from their own office or from one of Ritchie Bros.' auction facilities in Toronto, Canada; Orlando, U.S.; Baltimore, U.S.; Moerdijk (Rotterdam), the Netherlands; Dubai, the United Arab Emirates; Singapore; Brisbane, Australia; and Toluca (Mexico City), Mexico.

Interested bidders must first register with Ritchie Bros, and will be required to file a $2-million deposit to bid on the vessels.

Full details about the auction are available on the Ritchie Bros, web site. 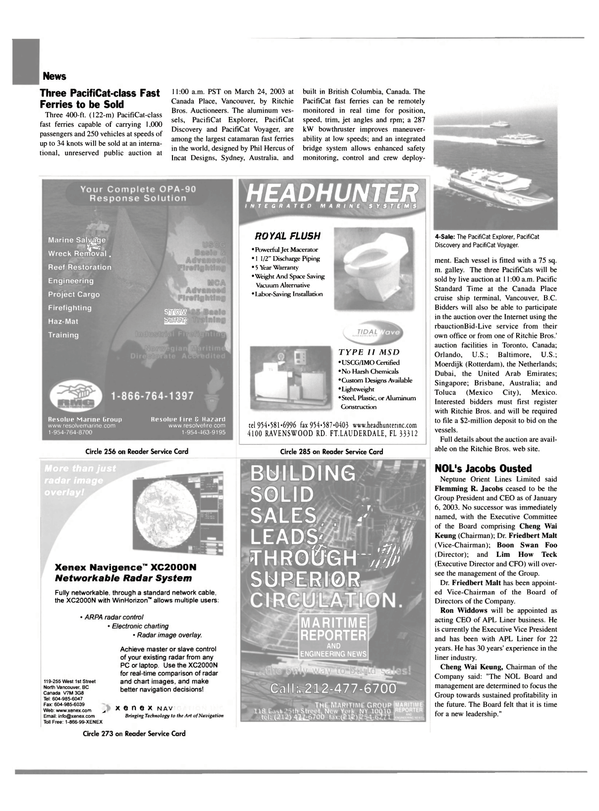