Navigator of the Seas—A New Course for Profitability

It is incredible to consider that from the icy environs of Turku, Finland, emerge great ships of steel that are designed to spend their lives transporting passengers to and from mostly tropical paradises.

Such was the feeling upon boarding the nearly 140,000-gt Navigator of the Seas — newbuilding 1347 —just three days before its Nov. 18. 2003 hand over to Royal Caribbean Cruises Ltd.

Navigator is the fourth, latest and arguably greatest of the five-ship Voyager series. While the first ship of any series is, indeed, special, particularly so in the Voyager-class series as it was a world record setter based on its enormous size and onboard amenities.

Navigator features a number of enhancements that have resulted from a unique cooperation, long-relationship and good communication among Royal Caribbean, Kvaerner Masa-Yards and the myriad designers, naval architects and marine engineers, and suppliers that conspire to bring these ships to life.

Strong by Design Speaking a few days before the delivery of the massive Navigator of the Seas, Harri Kulovaara. senior vice president of fleet operations and newbuilding.

Royal Caribbean, said despite the overall economic malaise, that Royal Caribbean had enjoyed a relatively stable year, with 106 percent occupancy and a slight two percent drop in yield.

He said the carrier, the industry, is convinced a bounce back in business is coming, pending the "normalization of the world." Focusing on the ship.

Kulovaara pointed out that the operational experience with the first three ships proved instrumental into fundamental and substantial changes for numbers four and five, changes intended to not only enhance the aesthetic beauty of the ships inside and out, but to enhance their cost efficiency. This is most interesting, as he noted "we never imagined from the beginning that this would be a long series ... at the beginning , we though we would build one or two." The first three ships in the series. Voyager of the Seas, Explorer of the Seas and Adventure of the Seas were delivered in October 1999, September 2000 and October 2001 respectively.

The most significant change was the use of bolt-on balconies, a move that not only enhances the subjective beauty of the ship, but comes with a substantial weight savings. Kulovaara said that concern with the initial ships centered on steel concerns because of the Royal Promenade running in the middle of the ship. The Royal Promenade is a four deck high horizontal promenade, a design featured for the first time on this Voyager-class cruise ship series. The length of the promenade is nearly 400 ft.

(120 m), and it has in each end an 11 deck high atrium, the Centrums. The Royal Promenade also features inside staterooms with a view.

Kulovaara said once significant operational experience was had, it was determined that they could lighten it up by using less steel and incorporating the bolt on balconies.

Navigator of the Seas also incorporates a radically larger children's area - by his estimation the largest children's area at sea - as Kulovaara admitted the carrier was overwhelmed with the number of young cruisers coming onboard, sometimes accounting for 1,300 of the ship's 3,800 passengers. Kulovaara is quick to point out, though, that the ship and its numerous facilities are not large just for the sake of being large. The space has been apportioned judiciously, particularly so on Navigator, to maximize income opportunities. Another example of this is the replacement of a sports-themed bar in the Royal Promenade with an upscale Wine Bar.

A Collaborative Effort With a gross tonnage of approx.

"Again we have built and handed over a great cruise ship to our client - to specification — on time and to budget," said Jorma Eloranta, President and CEO of Kvaerner Masa-Yards. The concept design of the Voyager-class cruise ships was made by Kvaerner Masa-Yards Technology in close co-operation with Royal Caribbean. The layout of the ship areas have been designed by the yard and the owner together with several highly reputed architects such as the Norwegian Njal R. Eide, - RCI Newbuilding Design, RTKL Snoweiss Design Group Tom Graboski & Associates, Morris Nathanson Design and Wilson Butler Lodge Inc. from USA - Tillberg Design and Arkitektbyran from Sweden, - Design Team, Stephenjohn Design and London Contemporary Art (artwork) from the UK.

A Long Relationship The relationship with Royal Caribbean dates back to the mid 1960's, when the cruise line's first ship, the 18,417 GT/725 passenger cruise ship Song of Norway was on the drawing boards. The yard in Helsinki built Royal Caribbean's first four ships, the Song of Norway (1970), Nordic Prince (1971) and Sun Viking (1972). The 1,400 passenger Song of America was completed in 1982.

Also, the yard lengthened both Song of Norway and Nordic Prince in the first such operation ever performed on a passenger ship. The yard also developed the concepts of the RCCL third generation (Sovereign-, Monarch-, Majesty of the Seas), fourth generation (Project Vision I & II and V & VI) vessels, of which Grandeur of the Seas and Enchantment of the Seas were delivered in 1996 and 1997 respectively, and developed the concepts of the recent Vantage and Millenium class ships. 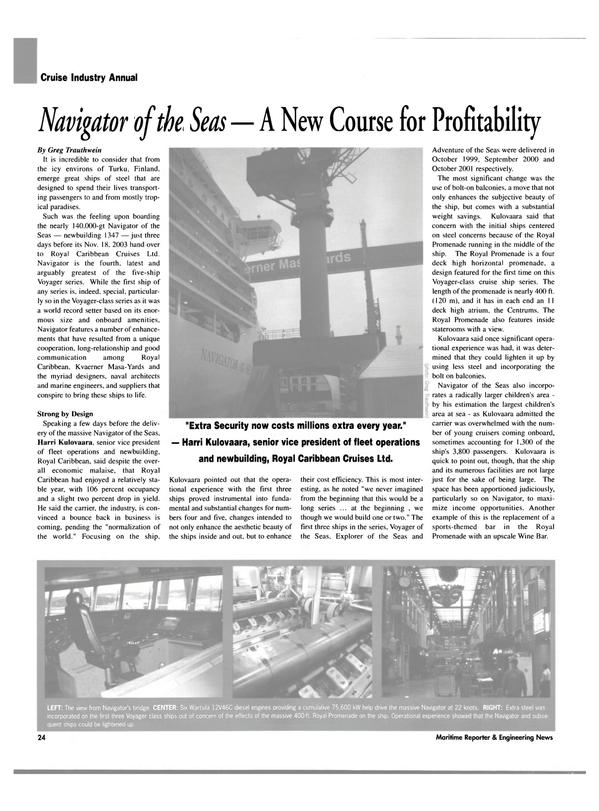 Read Navigator of the Seas—A New Course for Profitability in Pdf, Flash or Html5 edition of February 2003 Maritime Reporter