Gotar: Keeping Ships Clean From the Inside

With a number of recent disease scares aboard cruise ships, the mandate to get and stay clean is monumental. Therefore, companies such as Gotar Technologies have begun to focus more and more on the motto of which they are based, "Perfect chemical solutions for a perfect world." The company, whose headquarters are based in Quebec, Canada, also operates an R&D Production unit out of Saguenay, Quebec, and a U.S. office in Houston (Friendswood), Texas. Manufacturing a diversified variety of cleaning products with a large range of applications, the company features a selection of products, such as deoxidizers that eliminate lime and calcium buildup; degreasers that remove organic matter, oil residues and carbon deposits; and other formulas developed for a variety of metal surfaces.

Gotar's products are touted as non-toxic, biodegradable and cost-effective, while extending equipment's life cycle. The Gotar product that has received the most coverage recently is Gotar D - a deoxidizer, descaler, which dissolves calcium, lime and other corrosive materials from steel, copper alloys and iron. The product was approved late last year by the U.S. Navy for use as its exclusive deoxidizing cleaning agent on its surface fleet.

Formulated to seek out ferrous and non-ferrous oxidation, corrosion and lime, Gotar D is similar to the company's Gotar AL, which is just as effective as a deoxidizer and descaler, but is designed for safe application on light metals, such as aluminum, magnesium and tin.

Regarding Gotar's degreasers and emulsifiers, these products are designed to attack oil residues, synthetic oils and grease, as well as carbon deposits.

On the commercial side, mainly the cruise shipping niche, Gotar recently sent a technical crew to Freeport, Bahamas to perform various deoxidizing functions on cruise vessel SS Sun. The 984 ft. (300- m) ship, which was built in France in 1964 at the time was undergoing a complete refit by its manager, International Shipping Partners, tapped Gotar to decalcify critical equipment such as evaporators, cooling systems, heat exchangers and boilers.

Using 10,000 liters of Gotar D, the deoxidizing was performed within the equipment (containing 800 tubes) with a 15-hp pump in a closed circuit operation. With more than 2,000 liters of Gotar D used to fill the 30 x 16-in. exchanger, the entire process was completed successfully within four hours.

Another answer to a problematic situation by Gotar was performed on Groupe Desgagnes' vessel N/C Melissa Desgagnes, which required a clean up of its cooling system. Subsequent to coupling hoses on the entry and outflow of the vessel's cooler, Gotar D was circulated by maintaining a cycle that alternates rest periods and circulation periods during three hours — enabling Gotar engineers to clean thoroughly the inside of the cooler. 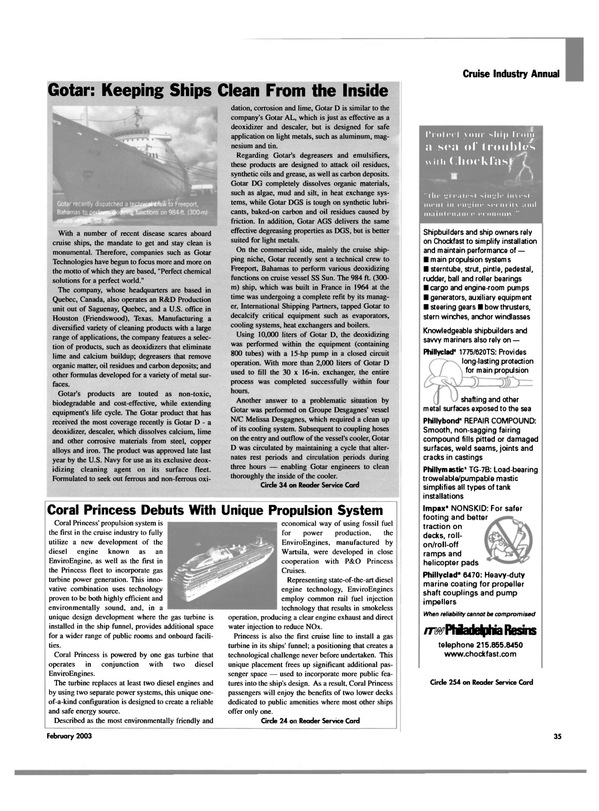 Read Gotar: Keeping Ships Clean From the Inside in Pdf, Flash or Html5 edition of February 2003 Maritime Reporter