On June 15, 2003. Lester Rosenblatt passed away at the age of 83. MR/EN remembers this industry icon, who through his ambition and wealth of industry knowledge founded what would become one of the world's most successful naval architecture and marine engineering firms.

Lester Rosenblatt, (along with his father. Mandell) founded M. Rosenblatt & Son, Inc. in 1947. where he served as Chairman, CEO and Naval Architect.

Through his unending drive, the company grew to be one of the world's largest private engineering firms specializing in naval architecture and marine engineering.

Providing management and leadership to his company in the design and development of all types of naval and commercial ships. Rosenblatt's expertise extended from aircraft carriers and submarines to tankers, tugs and high performance craft. Many of the world's most innovative designs, which included the Spruance Class Destroyers, L.Y.

Through its nationwide network of offices M. Rosenblatt & Son. Inc. completed successfully more than 27.000 assignments on such tasks as management and technical aspects of ship design, complete ship designs, including engineering analyses, conceptual, preliminary, contract and detail designs, and installation and support services.

Before founding the company that bears his name, Mr. Rosenblatt earned undergraduate degrees from the University of Michigan and the City College of New York (CCNY), as well as an honorary doctorate degree from the Webb Institute in Glen Cove, L.I.

Mr. Rosenblatt was not only an innovator in his industry, but a leader as well, serving for two years as President of the Society of Naval Architects and Marine Engineers (SNAME) — a position that is currently held by his son, Bruce. He was a Fellow and Honorary Member of SNAME, a member of the American Society of Naval Engineers (ASNE); an Honorary Trustee of Webb Institute, a member of the American Bureau of Shipping and Bureau Veritas, and an Honorary Member of The Marine Society of the City of New York. He was also an active participant on the National Academy of Sciences' Maritime Research Board's Committee on Innovation in the Maritime Industry.

Known for his active support of the maritime industry's professional societies, Mr. Rosenblatt will also be remembered for his lively discussions and comments on technical presentations at section meetings, symposiums, and other colloquia. He was an ardent and strong advocate of the generation and dissemination of state-of-the-art technical information, as evidenced by his support of hundreds of employee written papers on the subject of naval architecture and marine engineering.

Through his personal efforts, M.

Rosenblatt & Son, Inc. became a significant part of the U.S. naval and merchant ship design capability. With the firm belief that a strong navy, coast guard and merchant marine are vital to the well being of this nation. Lester Rosenblatt dedicated his more than 59-year career to excellence, integrity, technical proficiency, and innovation in ship design.

Mr. Rosenblatt capped off his career in 1995 when he was inducted into the International Maritime Hall of Fame and presented with the coveted Ship's Lookout Award for his dedication and leadership in the advancement of the marine industry. Five years later, on April 7. 2000. M. Rosenblatt & Son.

Inc.. was acquired by the Virginia Beach, Va.-based firm of AMSEC LLC - while still maintaining the traditions and expertise on which the company was modeled. The son of Mandell and Rosa.

Farstad Signs MOU With P&O Farstad Shipping ASA has signed a Memorandum of Understanding (MOU) with P&O for the purchase of P&O's 50 percent share in P/R International Offshore Services ANS (IOS) and P&O's offshore supply management services in Melbourne. IOS. where Farstad already has a 50 percent share, has presently a fleet of 18 vessels, including two vessels on bareboat contracts.

With an operating income of S76 million in 2002, IOS has two newbuildings for delivery in 2003. And with the exception of two vessels, the fleet is trading the South East Asian and Australian market. The purchase price is S84.7 million. With the gross investment for Farstad Supply at approximately $150,000 for the 50 percent-share, the parties intend to complete the transaction by the end of June.

She will be based in Los Angeles and will have responsibility for Crowley's day-to-day commercial tug operations in Los A n g e l e s / L o n g Beach and in San Diego. In addition, she will handle customer service, marketing data collection and analysis, and maximizing fleet utilization.

Duncan will be charged with directing the aggressive new equipment sales growth of Hagglunds' U.S. and Canadian operations.

Caporelli Duncan TEN Receives Panamax Tanker, Announces Charter Agreement Tsakos Energy Navigation Ltd. has entered into a new medium-term charter arrangement w ith PMI, the state owned oil company of Mexico. Under the terms of the agreement, TEN has chartered its newly delivered coated double-hulled Panamax. the Aztec, to PMI. The contract is for 30 months at an accretive rate. TEN currently has the Handysize product carrier Libra chartered to PMI until 2005. The Panamax Aztec was delivered on May 29 from Imabari Shipyards in Japan. The vessel immediately entered into a profitable repositioning voyage with a major oil trading concern, and will then commence the time charter w ith PMI.

He succeeds Rollie Webb, who recently announced his resignation from the president and COO position.

Stelmar Signs Time Charter Stelmar Shipping Ltd. has signed a time charter contract for Ambermar. a 2002 double-hull Handymax tanker. The time charter was renewed for another two years by Fuel and Marine Marketing LLC (FAMM). a ChevronTexaco company, at a rate of S14.000/day. To date. Stelmar has secured 82.4 percent of the net operating days of its fleet on profitable time charters for 2003 and 39.2 percent for 2004, representing SI38 million and $86 million in revenues, respectively. Stelmar also announced the sale of Promar, a Loughlin 1988 double sides Handymax tanker.

Following the sale of Promar. Stelmar w ill have 30 tankers in service, with an average age of 7.3 years.

LR Appoints New COO Chris Loughlin has been appointed to the new post of COO for the Lloyd's Register Group, effective July 1. 2003. This a p p o i n t m e nt marks the successful completion of the second phase of the Lloyd's Register recovery program, during which David Moorhouse has carried out the roles of Chairman and Chief Executive. As Executive Chairman, Moorhouse will continue to take responsibility for the Group's activities, with Loughlin joining him and Robert Biddle, Group Finance Director, as an executive member of the Board.

Somerville. currently President and COO of ABS has been elected to the position of CEO by the ABS Board of Directors. These duties will be in addition to Somerville's current responsibilities.

The transfer of CEO responsibilities from ABS Chairman Frank J.

Iarossi will continue as Chairman of the classification society until May 1, 2004 and remains Chairman and CEO of the ABS Group of Companies, an affiliate of ABS. The Board of Directors has also elected Robert E. Kramek, currently senior V.P. and president, ABS Americas division to the position of executive V.P.

Lubmarine to Launch New Line for Medium-Speeds Lubmarine will launch a new generation of clean lubricants for mediumspeed engines and high stress applications, which will be available this month. The new range, Aurelia XL, has been formulated using the latest additive technology to cope with the increasingly demanding environment of modern marine engines.

The new clean formula is designed to reduce ring sticking and breakage, which contributes to a longer engine life. The lubricant offers superior protection of all engine parts against corrosion due to Aurelia XL's high BN.

Aurelia XL has been developed for use in medium speed main propulsion and auxiliary trunk piston diesel engines in both marine and power plant applications.

It is also suitable for use in turbochargers, geared transmissions, oil filled stern tubes and variable pitch propellers and other deck equipment requiring a SAE 30 or 40-grade oil.

Aurelia XL is available in SAE 30 and 40 grades and in a range of BNs with the major grades being BN 30. BN40 and BN 55. For special applications BN 25 and BN 65 grades are also available.

Bachrach & Wood Celebrates 50th Bachrach & Wood was formed 1953 to provide marine surveying and consultant services to the shipping industry in New Orleans. Over the years, Bachrach & Wood has changed its focus from bluewater shipping to the offshore oilfield, now providing builder's risk sur- veys for heavy lifts and pipeline construction, warranty surveys for trips-into, vessel safety and security audits, and on/off charter surveys for barges and boats. The firm is headquartered in Morgan City, La., with offices in Metairie, Fourchon and Harvey, La., as well as Houston.

New York Seaport Manager Honored Arie Van Tol, a veteran Port Authority employee who currently manages the New York Marine Terminals, has been honored for more than 30 years of distinguished service to the bistate agency and the maritime community, according to Port Commerce Director Richard M.

Borrone Award, given to individuals who render unusually effective service to the port community. The award is named for Lillian C.

Borrone, a longtime director of the Port Authority's Port Commerce Department who retired in 2001.

Van Tol was instrumental in the reopening of the Howland Hook Marine Terminal in Staten Island in 1996, and in negotiating leases with the operators of that facility and the Red Hook Container Terminal in Brooklyn. He also has played a critical role in the $350 million redevelopment initiatives under way at Howland Hook, including the purchase of the Procter & Gamble site in December 2000. That property will serve as the site of a new on-dock rail facility. Mr. Van Tol began his maritime career in 1962, sailing with U.S. Lines, Prudential Lines and Grace Lines, where he achieved the rank of chief officer. He sailed on vessels that called on the Port of New York and New Jersey, i n c l u d - ing the piers along the Brooklyn waterfront that he now oversees as Manager of New York Marine Terminals. 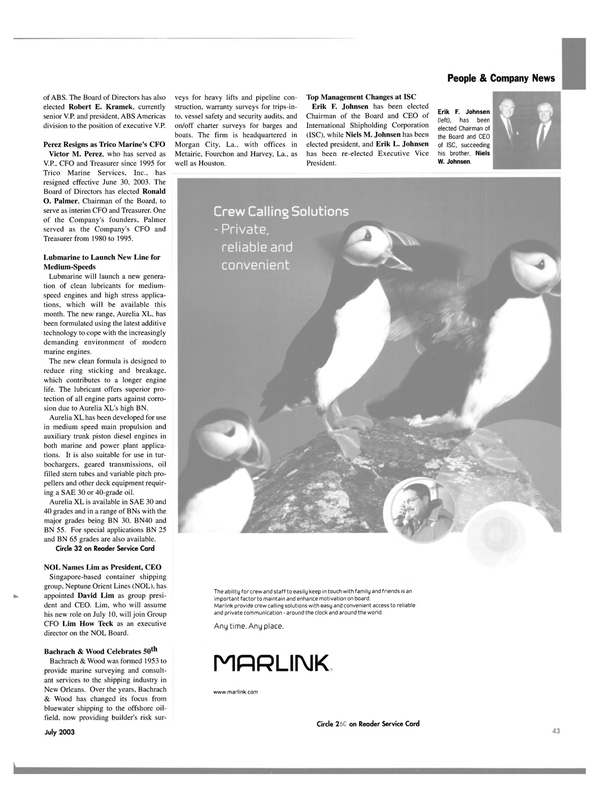