Overloaded dry docks are not a pretty picture. They crack, buckle, flood, sink, damage the ships they are trying to lift - and sometimes even cause accidental deaths. Dry dock accidents are not common, but they do happen, usually resulting in dramatic photographs and disastrous physical and financial consequences.

With past docking failures in mind, prudent dry dock operators strive to avoid overloading, normally through a set of manual calculations, but in certain cases through more sophisticated methods.

A case in point is the AFDL-23 ADEPT, a rigid, onepiece.

welded steel, floating dry dock that was built during WWII (principal particulars of the dock are presented in Table 1).

Throughout the last 50 years, corrosion has caused structural wastage throughout the dock with some structure being renewed with plating and stiffeners that were not in accordance with the dock's plans. Other modifications to the dock include two cranes and a hydraulic power pack mounted to the starboard wing wall (half-inch plating was added to increase deck strength). Also, the original diesel generators and their associated equipment have been removed. ADEPT is leased from the Navy by Gulf Copper Ship Repair, Inc.. and is located at Aransas Pass (Inglesidel. Texas.

"We use ADEPT to dock Navy minesweeper and mine counter measure Ships - MHCs and MCMs." says Gulf Copper Dockmaster. Jim Booker. "One of the many requirements included in our Facility Certification Report is to operate the dry dock within the allowable deflection limits, so our primary concern is always to adhere to NAVSEA operational limits." Gazing at the dock, placid at its pier-side mooring, he continues.

"This dock grounded in Guam during a typhoon in the 1970s, and after the repairs, it had a permanent sag on the starboard side. Unfortunately, the dimensional uncertainties of that sag prevented us from knowing what our limiting longitudinal deflection readings should be. We were getting readings of 1.5 in., and the Navy limit was only 0.8 inches. The block loads seemed okay, and the dock wasn't breaking, but our instruments were telling us we were way out of spec.

We were uncomfortable, and so was our customer. We needed answers." To find those answers, Gulf Copper turned to Anteon Corporation's Proteus Engineering Division, and its structural design, analysis and optimization program.

MAESTRO. Kevin Stone, senior principal naval architect at Proteus noted. "MAESTRO is well respected by the Navy. It's been used on lots of combatants and dry docks for design analysis and to solve problems.

It's equally at home with specialized analyses like dry docks as it is with full ship analyses of all types of ships." With quick keystrokes he brings a MAESTRO image of ADEPT onto his computer screen. "MAESTRO can automatically evaluate 25 different stress and buckling failure modes - that's unique to this program." Stone's MAESTRO model of ADEPT considered plate and stiffener corrosion of pontoon deck, bottom plate, side shell, and wing tanks.

The analysis showed that the dock structure is satisfactory for MHC and MCM dockings, with longitudinal deflections (adjusted to take into account the permanent sag) of 0.039 and 0.170 inches, respectively.

Proteus recommended an operational limit of 1.25 in.

Both Gulf Copper and the Navy concurred with the MAESTRO results, and are now confident in the ability of ADEPT to safely dock Navy minesweepers. 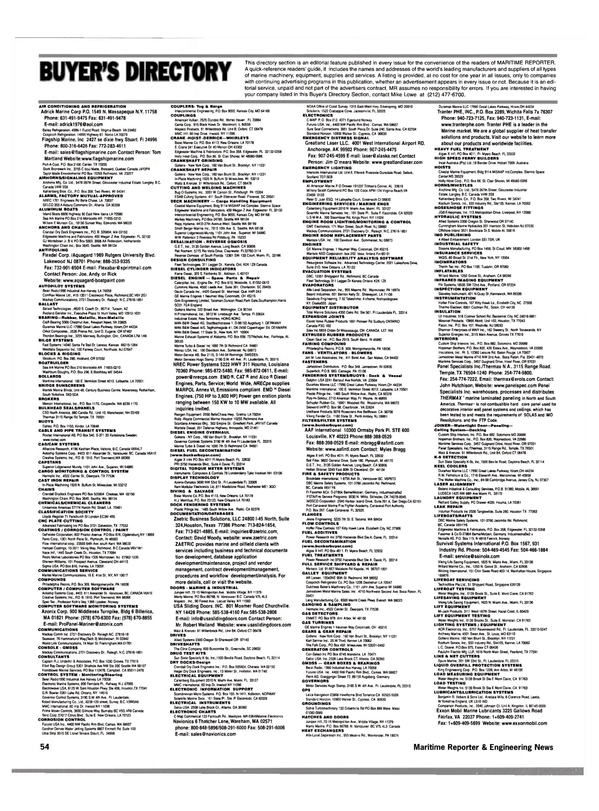