Show Me the (Grant) Money

Following the mandates to enhance maritime security throughout the United States, programs were developed to make federal funds available to partially offset the costs being imposed on the private sector. The programs, which started off with great fanfare, are in danger of collapsing due to lack of continued funding by Congress and attempts by the Administration to siphon off monies for other missions.

The first monies appropriated by Congress for port security grants were in the Department of Defense and Emergency Supplemental Appropriations for Recovery from and Response to Terrorist Attacks on the United States Act, 2002 (Pub.L. 107- 117, January 10, 2002). This measure provided, in pertinent part, that $93,300,000 should be made available "to award competitive grants to critical national seaports to finance the costs of enhancing facility and operational security." The monies were to be derived from the $40 billion appropriated in the emergency supplemental appropriations bill enacted shortly after the September 11. 2001 terrorist attacks. No more than $1 million of the appropriated monies could be used for administration of the grant program. The grants were to be awarded based on the need for security assessments and enhancements as determined jointly by the Under Secretary of Transportation for Security, the Maritime Administrator, and the Commandant of the Coast Guard.

Establishment of the Port Security Grants Program was announced by the Secretary of Transportation on February 28, 2002. Two categories for grants were developed: (1) security assess- and mitigation strategies; and (2) facility and operational securi- ty. The first was focused on ascertaining vulnerabilities and identifying mitiga- tion strategies. The second was foractu- al security enhancements including facility access control, physical security cargo security, and passenger security.

On June 17. 2002, the Secretary of Transportation awarded $92.3 million in grants for port security. Only $5 million was provided for security assessments, with S78 million funding enhanced facility and operational security and $9.3 million for "proof-of-concept" projects. The latter projects explored new technology, such as electronic seals, vessel tracking, and electronic notification of vessel arrivals. The largest single award was for $6,844,800 to the Broward County Board of Commissioners in Florida. The New York City area, though, received a total of $9.3 million when the separate awards to the Port Authority of New York and New Jersey, the New York City Department of Transportation, and the New York City Economic Development Corporation were counted together. The smallest award was for $8,000 to the Woods Hole, Martha's Vineyard, and Nantucket Steamship Authority in Hyannis, Mass. Details of the individual projects were not identified, but 77 entities in 51 ports received awards.

On January 14. 2003. the Secretary of Transportation announced that $105 million would be made available in the second round of port security grants. An additional $28 million would be used to fund the Operation Safe Commerce pilot program. At the time of the announcement, monies had not yet been appropriated by Congress. When the regular appropriations were finally enacted into law on February 20, 2003, they included $150 million for port security grants and an additional $30 million for grants, contracts, and intera- 18 gency agreements for the purpose of deploying Operation Safe Commerce. A separate $10 million was appropriated for research and development grants for port security purposes, such as cargo targeting and inspection, detection of weapons of mass destruction, and smart containers. The schedule called for the new grants to be awarded in May 2003.

During negotiations in Congress on the 2003 Emergency Wartime Supplemental Appropriations Act.

Sen. Hollings, (D-S.C.), offered an amendment to include $2 billion for implementation of the Maritime Transportation Security Act of 2002. Of this, $450 million would have been for grants to ports and waterfront facilities to help ensure compliance with federally approved security plans and $150 million would have been for grants to states, local municipalities and other entities to help comply with federal area security plans and to provide grants to responders for port security contingency response. The amendment was initially approved by the Senate under a voice vote, but was dropped from the final bill prior to enactment.

When finally adopted, the Act only provided $20 million for new port security grants.

On April 21, 2003. administration of Round II of the Port Security Grant Program transitioned to the Transportation Security Administration (TSA), which had previously been transferred from the Department of Transportation to the new Department of Homeland Security. In May 2003, the Administration advised Congress that it would seek authorization to transfer monies from the Port Security Grants Program and from Operation Safe Commerce to other security programs, including payment of overtime for airport security screeners. This proposal raised a firestorm of protest from members of Congress and from affected ports. The Administration has now receded from its original proposal and. as of this writing, seems to be reevaluating its approach to port security grants.

The Department of Homeland Security has, though, awarded monies via its general grant program for various port security purposes. On May 14, 2003, the Department announced allocation of $700 million to enhance the security of urban areas with high density population areas and critical infrastructure. Included in this allocation were $75 million for selected high threat ports and certain ports involved in Operation Liberty Shield. The port security funds could be used to cover operational activities conducted during times of high threat conditions, critical infrastructure security, security enhancements, training, exercises, equipment.

planning, and information sharing. Additional allocations were made to the New York/New Jersey Metropolitan Area ($30 million) and to Charleston, S.C. ($5 million) to implement radiological defense systems. These systems are intended to enhance radiological detection capabilities and may or may not be used in the seaport areas.

On June 12. 2003, responding to heavy political pressure, the Department of Homeland Security announced the award of Round II of the port security grants. The awards, totaling almost $170 million, were made to 199 state and local agencies and private entities. The largest single award was to CITGO Petroleum Corporation. LCMC. of Lake Charles, La. in the amount of $13,467,015. The smallest single award was for $8,598 to Tidewater Barge Lines of Vancouver, Wash. At the same time, Operation Safe Commerce grants were made to the port authorities of Seattle/Tacoma ($13,302,791), Los Angeles/Long Beach ($8,250,356), and New York/New Jersey ($6,747,227). It is presently unclear when, if ever, the remaining $30 million in Operation Safe Commerce funds will be awarded.

Meanwhile, the President's budget proposal for fiscal year 2004 contains no monies specifically designated for port security grants. Monies are provided, though, for grants to address infrastructure and key asset protection measures and various other broad programs that might include grants to ports and port facilities to assess vulnerabilities and enhance security. The problem with the general grant program is that maritime interests have never competed well with non-maritime interests when it comes to allocation of federal funds.

One needs only to look at transportation funding allocations to realize that if maritime security funding is not fenced off, it will suffer in the political process.

While port interests may lament these developments, it must be borne in mind that no grant monies have been appropriated to help offset the costs being imposed on vessel owners and operators to enhance maritime security. The U.S. Coast Guard has estimated the 10-year cost of its maritime security plan requirement alone at $6 billion for ports, port facilities, and vessels. Most who have looked at this believe the Coast Guard estimate is low by a factor of up to four. 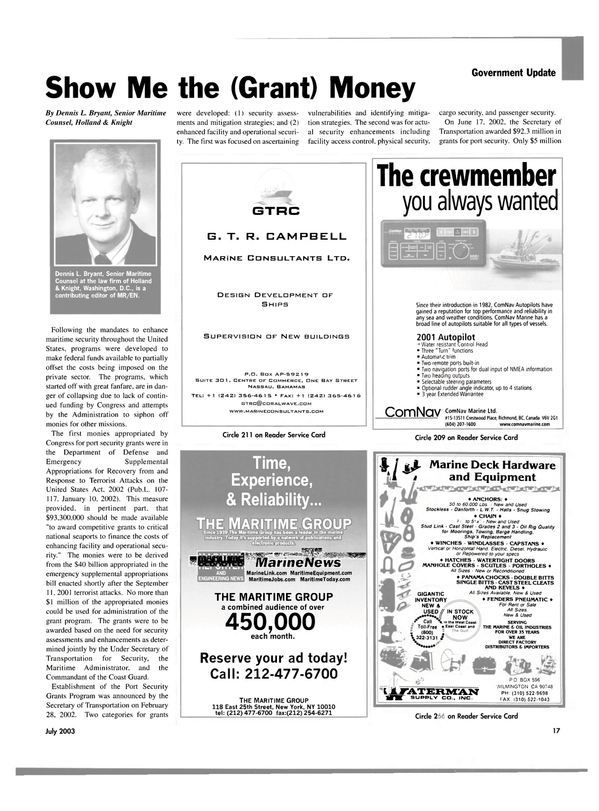 Read Show Me the (Grant) Money in Pdf, Flash or Html5 edition of July 2003 Maritime Reporter