Is More Drilling on the Way?

"Deep" Gas in Shallow Water, Increased Deepwater Activities are Positive Signs for Recovery There has been a steady stream of bad news recently in the marine press regarding the health of the oil and gas industry in the Gulf of Mexico.

Much of this bad "press" is fueled by boat operators who are trying to do a "Rope-a-dope" on their competitors.

That is by "talking the industry down" they are trying to convince competition that "better days" may be years out. hoping they may not be ready when the turnaround comes.

All indications are that the industry will indeed drill itself out of the current malaise - sooner than later. And the indicators for such a turnaround are right in front of your face if you know where to look.

In general, people who follow intensely the oil and gas industry all agree that a significant rebound is on the way.

CIBC World Markets is one such expert in oil and gas markets and they recently concluded, "During the past few months oil and gas operators seem to be getting a new degree of confidence in future natural gas prices.

As a result, we anticipate the 19 percent increase in drilling activity the oil field service industry has experienced in the last 15 weeks could just be a precursor of things to come." Paul H. Hilegeist. president of Quest Offshore Resources, added. "An analysis of the North American Gulf of Mexico market reveals a large upside potential for growth over the next six years despite weaker overall market conditions in 2002." Drilling for natural gas and oil drives the Gulf of Mexico energy market. Here is an analysis of these two sectors and how development in both gas and oil impact the fleet of offshore vessels.

Natural Gas A prime example of why a great increase in the drilling for natural gas is on the way is the action Interior Secretary Gale Norton took recently when she proposed major new incentives to increase deep natural gas production in the Gulf.

There are about 2.400 such leases targeted by the proposal. The royalty relief would be applicable for wells drilled beyond 15.000 ft. There is even a "dry hole" incentive built into this new program. If a dry hole 18.000 ft. or deeper is drilled, then a royalty relief of 5 billion cu. ft. of gas is given to the driller.

Most of those existing leases have been explored and wells drilled, but new technology makes it feasible to find gas at much greater depths than before.

The Energy Information Administration forecasts the demand for natural gas will increase by 30 percent in the next 15 years with supplies available to meet only 70 percent of this demand.

The immediate supply-demand equation for natural gas is tight at best. Natural gas prices have been running about S6 per thousand cu. ft. .. .almost double that of a year ago.

Coupled with the price is that storage levels of the clean and odorless fuel are at a five year low after a colder than average winter. And even though rig count is up 44 percent since April 2002, storage is down almost 50 percent from just one year ago.

So the short term forecast for shallow water drilling mostly via jackups is very promising indeed.

Bob Alerio. president of the Marine Offshore Service Association (OMSA) is very optimistic about the drilling for deep gas on the shelf. "Deep gas is one piece of the puzzle that our members (offshore vessel operators) think will result in significant activity on the shelf." Alerio said. "The development of 3- and 4-D technology has found proven reserves of natural gas far deeper than anyone had imagined and on the same leases where there were major gas finds and shallower depths," Alerio added. "Although the 'glass is half empty' crowd tries to diminish the importance of deep gas, our membership takes a more positive view," Alerio added.

Given a huge need for natural gas and the rig availability to drill for it, what's the likely impact on the offshore oil and gas service industry?

Any increase in drilling is a boost for the offshore service sector. But the drilling for deep gas has a special significance for the boat operators. With the rigs drilling from 15,000 to 20,000 ft. deep, drilling mud takes on a special significance in that much more mud is used, a greater variety of mud is called for and "mud swaps" (the complete change out of mud where the vessel takes on old mud and delivers new mud) is in increasing demand by the drillers.

This demand for mud has had a direct impact on the design of the newer supply boats. For example, Bollinger's new 207 Series of supply boats was designed to carry 6,000 barrels of liquid mud in 10 tanks. "We can carry three different types of mud and have two independent piping systems to circulate the various types of mud we carry," said Albert Cheramie, co-owner of C & G Boats, Golden Meadow, La. purchaser of the first two of this new series of boats. "Mud swaps are easier than ever before," Cheramie added.

Additional details on the new building plans for supply boats were exhaustively covered in the April 28, 2003 issue of sister publication MarineNews.

The emergence of the deep gas in shallow water market will also be a boon to operators of lift boats. These specialized vessels lift themselves out of the water on three cylindrical legs are ideal work platforms for jack up rigs and shallow water platforms. Lift boat companies such as Montco Offshore, Golden Meadow, La.

have recently put new high capacity lift boats in their fleet in anticipation of significant business on the Continental Shelf.

Deepwater No other single drilling initiative has had the impact on the offshore vessel business as the exploration and drilling for oil and gas in deepwater. Deepwater drilling and production activities are farther from shore than the 100-400 ft. water depth on the shelf.

According to a survey just completed by Offshore Magazine, there are 174 fields in water depths ranging from 1,000 ft. to more than 9,680 ft.

According to Infield Systems Ltd., 4.3 billion barrels of "energy" (a term including both gas and oil) were found between 1998 and 2002. Deepwater fields are expected to yield 9.9 billion barrels of energy between 2003 and 2007. El Paso Energy Partners believes there is a strong future in deepwater, especially with subsea tiebacks and multiuse floating platform facilities.

Bart Heijermans, V.P. of Deepwater Project Development for El Paso was quoted at a recent energy conference as saying, "The cost of deepwater platforms has significantly decreased leading to the development of a new series of platforms focusing on reuse and relocation." The mobility of this new series of platforms will call for an increased use of anchor handlers to handle the movement and mooring of these platforms. Recent fleet additions among the larger offshore operators underscore the increased importance of anchor handlers. Tidewater's purchase of the Ensco Marine fleet that includes five anchor handlers makes more sense taken into this context.

They get instant access to this type of vessel without the usual construction wait.

The deployment of the large anchor handler Laney Chouest by Shell also fits into this pattern.

As reported exclusively by MarineNews in February and March of this year, the Edison Chouest Offshore-built Laney Chouest can move rigs faster and carry more mooring devices such as suction piles than any other anchor handler in the Gulf of Mexico.

At day rates of $11,000 a day or more, anchor handlers are really the queens of offshore service vessels and it appears that they will be in heavy demand this year and in the future. Capital expenditures for deepwater construction for the 2003-2007 period will reach $18 billion, according to leading energy trackers Douglas- Westwood and Infield Systems. Much of this investment is expected in the near term as 17 deepwater pipelines including several major gathering systems and other subsea construction projects kick-off this year. Not to be optimistic about the future of the Gulf of Mexico is both foolish and uninformed. 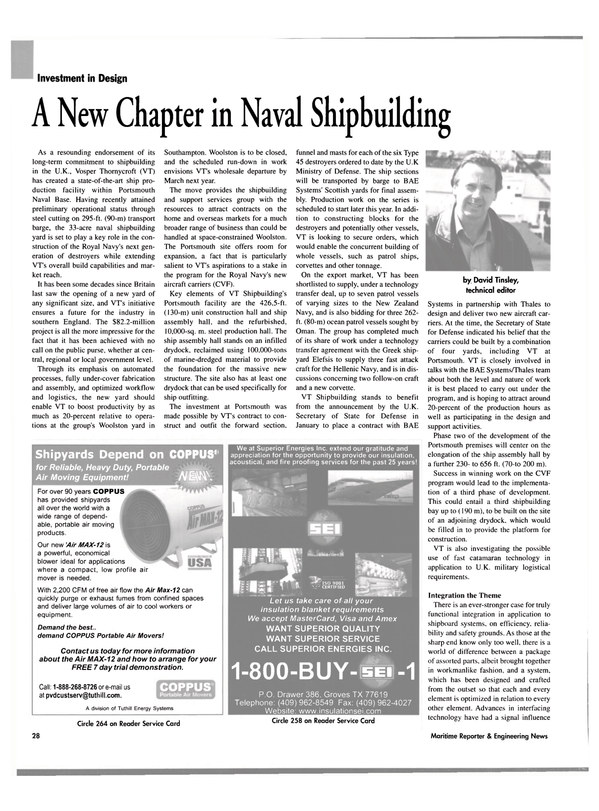 Read Is More Drilling on the Way? in Pdf, Flash or Html5 edition of July 2003 Maritime Reporter