How to Defend against Patent Trolls without Breaking the Bank

Patent trolls—those who seek to enforce patent rights, but do not actually manufacture or supply services based on the patents—are a problem in all industries, including the shipping industry. And as the pace of innovation in shipping continues to accelerate in areas such as environmental compliance, electronic navigation, vessel design, construction and operation, offshore construction and exploration, and cargo logistics management, claims by patent trolls are sure to rise.
It is not just companies who design and sell products in the maritime sector who are at risk. Your company can be sued by a troll (or by a “legitimate” patent owner) if it makes, uses, sells, offers to sell, or imports an item, or practices a method for conducting business (for instance, a method for managing the routing and stowage of containers on a liner service) that is covered by a U.S. patent. Your company can be sued for patent infringement even if it does not directly infringe, but rather induces others to infringe or contributes to their infringement. Retailers, manufacturers, financial services companies, investment funds, and companies at every step of the supply or service chain are exposed.
Defending a patent case against trolls is expensive and, depending on where the suit is pending, the median time to trial is 2.3 years, though in some instances a patent case can take 10 years or more from start to finish. Damages for patent infringement usually take the form of a reasonable royalty—what you would pay for a license to the patent knowing that the patent is valid and infringed. One study of royalty rates awarded in litigation over a 23-year period concluded that the average rate was about 13 percent of the price of the infringing product. Another study reveals that, inexplicably, the median damages awarded to trolls are twice the median award for practicing entities. In addition, increased damages (up to three times the award) are available if the infringement is “willful,” and attorney’s fees can be awarded in “exceptional cases.”

How to Deal with a Troll
A troll’s business model is simply to get as much money as possible, as quickly as possible. Since trolls do not produce anything (they cannot be counter-sued for patent infringement as competitors often can be), and are often bank-rolled by investors whose sole purpose is to engage in litigation or by law firms that work on a contingency, trolls do not have the business motives of a competitor. Conventional wisdom of how best to defend a patent case therefore does not always apply, as it is often the most conservative, expensive, and time-consuming approach. Winning a case means little if your company does not survive.
While many claims of patent infringement brought by trolls are frivolous and may even be made with the hope that the target will settle quickly for the sole purpose of avoiding the costs associated with defending the claim—a classic strike suit—that does not mean that a claim made by a troll always lacks merit. It is important to keep in mind that a patent asserted by a troll has gone through the same examination procedure in the U.S. Patent Office as patents owned by non-trolls. Moreover, patents asserted by trolls are often acquired from reputable, multinational corporations that sell patents they no longer need to the highest bidder.
While settling a frivolous case presents philosophical issues—Do I want to pay off extortion?—quickly settling a non-frivolous claim may be a sensible exercise of business judgment to avoid disruption, uncertainty, and the risk of a significant damages award.  Critical to this decision is making a prompt and candid assessment of the validity and scope of the patent claim, so that management can make a sound judgment about how best to respond.

A. Dealing with Frivolous or Defective Claims

a. Motion Practice
Where the troll’s claim is frivolous or its complaint is procedurally or jurisdictionally defective, a motion to dismiss may allow a defendant to dispose of a case before engaging in expensive discovery. If the frivolity of the claim is more serious, various types of sanctions can be sought. While these sanctions are not unique to patent suits, they can be particularly useful against trolls that file suits without adequately investigating the legitimacy of their claims, or maintain suits after being apprised of why there is no infringement.
Another pre-trial procedure that can help bring a troll’s claim to an early conclusion is a motion for summary judgment, which is available where there is no dispute as to the material facts and the only issue is whether the moving party is entitled to judgment as a matter of law. Summary judgment may be appropriate when there is prior art that invalidates the patent or where the facts clearly establish that the patent is not actually being infringed.

b. Challenge the Validity of the Patent
If there are arguments that the patent at issue is invalid, it may be better to challenge the validity of the patent before the U.S. Patent Office. This option was made more attractive when the America Invents Act (“AIA”) was signed into law in 2011.
In general, the Patent Office procedures provide a cheaper way to challenge patent validity than having to proceed in court litigation. As courts will often stay an infringement action in deference to the Patent Office, these procedures can be an attractive alternative to litigation. The procedures can result in patent claims being invalidated, modified, or affirmed. If invalidated, then you cannot, of course, be an infringer. If the claims are substantively modified, as they often are, then infringement—and damages—do not start until the modification takes effect. And in some circumstances, you may even have intervening rights, i.e., your right to continue with your product or method may be superior to that of the patent owner’s.
The procedures can take 18 months to three years to complete, but even if the patent is ultimately upheld, the process can often result in clarity as to the scope of the patent claims. This will not only give you time to grow your business without the cost and disruption associated with litigation, but it will also give you an opportunity to pin down the troll on its interpretation of the scope of the patent, allowing you to more effectively respond to the claims.

B. Dealing with Valid
Patent Infringement Claims
If a candid assessment of the troll’s claim leads to the conclusion that the patent claim has some merit—or if a challenge to the Patent Office proves unsuccessful—a product or business method that is accused of infringing a patent can often be modified to avoid infringement. While this will not absolve your company for past infringement, depending on the length of time remaining before the patent expires and the amount of potentially infringing activity that already took place, cutting off infringement by discontinuing the supposedly infringing activity may lead the troll to reevaluate the value of the case.

C. Cost-Saving Strategies
Patent litigation often involves “bet the farm” issues, as damages for past infringement can be crippling and the threat of being prevented from selling your product daunting. With so much to lose, defendants often take a “no holds barred” approach, spending whatever it takes to win, but such an approach may not be feasible. Following are a few cost-saving strategies that must generally be considered:

• Indemnification. If you are sued based on a product or component that is made by someone else, then the party that provided the product to you may have a contractual obligation to defend and indemnify you in the case.

D. Avoiding Patent
Infringement Claims
Patent lawyers can conduct “freedom to operate” (“FTO”) searches. An FTO search compares your product or process to patents located through a search of the U.S. Patent Office files, in which patents are categorized by subject matter into classes and subclasses. If there are no patent claims that appear to cover your product or process, then you may be able to develop some level of comfort that you are free to proceed without infringing a patent. Similarly, if it appears that a potentially conflicting patent is invalid, then it may be possible to establish that fact before proceeding with the proposed business. Conversely, if the FTO reveals a problem, your company can forego the activity or design around the patent.

Conclusion
Patent trolls are an unavoidable business hazard, but with some advance precautions and a nimble response, the damage can often be minimized. As with many problems, advance preparation can often be the key to success.

Christopher K. Hu
With over 35 years of experience, Blank Rome Of Counsel Christopher Hu concentrates his practice in intellectual property litigation and represents a broad spectrum of clients in patent and trade secret cases and disputes.

Christopher K. Hu
Blank Rome Partner Tom Belknap concentrates his practice in the areas of international commercial and insurance litigation and arbitration, with particular emphasis on the maritime industry. 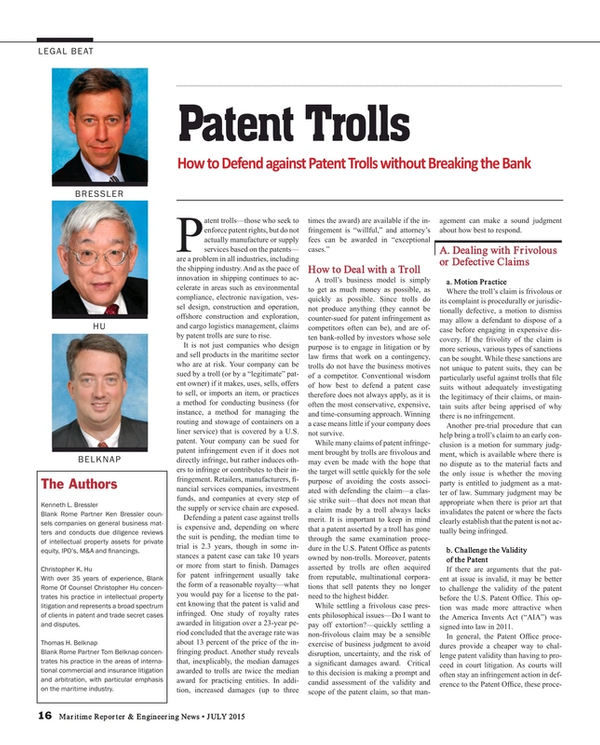 Read How to Defend against Patent Trolls without Breaking the Bank in Pdf, Flash or Html5 edition of July 2015 Maritime Reporter