The International Convention for the Prevention of Pollution from Ships (MARPOL) ANNEX VI Regulation 14 requires ships with Marine Compression-Ignition Engines at or Above 30 Liters per Cylinder use fuel with sulfur content less than 0.1%, after 01 January 2015 within the Baltic Sea area – as defined in Annex I of MARPOL, North Sea area – as defined in Annex V of MARPOL; within 200 miles of the North American area and when operating in the United States Caribbean Sea area – as defined in Appendix VII of Annex VI of MARPOL. As background the California Air Resources Board (CARB) created regulations for vessel emissions reductions for California’s ports as part of its continued mission to improve air quality around the state. The requirements came into effect in July 2009, under Title 13 California Code of Regulations (CCR), Section 2299.2, Fuel Sulfur and Other Operational Requirements for Ocean Going Vessels within California Waters and 24 Nautical Miles of the California Baseline.  The regulations require vessels use distillate fuel, either marine gas oil with maximum  0.1% sulfur, or marine diesel oil with maximum  0.1% sulfur, in their main and auxiliary engines. These regulations are still in effect pending results from sunset review in April 2015. Following the implementation of the regulations, California continued to experience Loss of Propulsion (LOP) incidents within state waters at a much higher rate than was seen prior to July 2009.  The LOPs can be loosely categorized into six groups for ease of discussion.

GROUP 1
Engine failures resulting in the LOP are due to the inability of the main engine, operating with MGO/MDO, to overcome the forces on the propeller from the forward momentum of the ship.  The engine may turn over at higher RPM and initiate combustion; however, as the engine reduces speed to come to dead slow or slow astern there is not enough BTUs in the fuel to maintain engine inertia. The engine stalls with the subsequent loss of propulsion. Similarly, ships not getting engine starts while anchoring when an astern bell is given, typically initiates a “Failure to Start” scenario. The remedy due to the lack of BTUs is to adjust the fuel rack to allow more fuel into the cylinder. This procedure cannot be done from most ship bridges but only from the Engine Control Room or from the Engine Side (manual).

GROUP 2
Failures resulting in the LOP are due to problems with controlling the temperature of the MGO/MDO. Each engine has specifications as to the temperature range required to operate using either heavy fuels or lighter fuels. For example, the optimal temperature range for an engine might be 1350C for a heavy fuel oil (HFO) and 400C for the MGO.  Because heavy fuels must be heated (for the right viscosity to burn) and lighter fuels may not need to be heated, there are problems associated during the fuel oil switch over in both heating and cooling the different fuel oil systems (since the fuel oil is supplied through the same auxiliary systems). Heating an MGO/MDO may cause “flashing” of the lighter fuel oil to vapor. The fuel injectors would not work when the fuel flashes causing a loss of power in that cylinder. Multiple cylinder flashes could result in LOP.

GROUP 3
Failures resulting in a LOP are associated with the loss of fuel oil pressure to either the fuel pumps or fuel injectors. The loss of pressure could be a result of many factors including wrong control set points, use of bypass valves, in-operable equipment, inattention to operating conditions, or excessive leakage through “O” rings and seals. The problem lies with physics. Metal expands when heated and contracts when cooled. Ships evolved to burn the heaviest and cheapest fuel available, HFO. To utilize the HFO on ships, the fuel is heated to as much as 1500C to get it to flow. In comparison, MGO/MDO fuel is burned at ambient engine room temperature or 400C and no heating is required. Once the cooler MGO is introduced into the fuel pumps and injectors, they contract causing a loss of fuel pressure at the pump with marginal spray pattern and leaks at the injector.
One of the other issues using MGO in an engine that has successfully run HFO for some time is viscosity. Typically the engine manufacturer’s recommended minimum viscosity is 2 centistokes (cst). Fuel viscosity specifications at 400C temperature for MGO/MDO range from 1.5 cst to 6.5 cst. The MGO loaded in California has a viscosity of 2cst to 3cst at 400C. When the temperature of the MGO is increased into an already warm engine that just ran on HFO, the heat lowers the viscosity causing the fuel machinery parts to bind or break. Keep in mind that the cylinder temperature is usually maintained at 800C and this heat migrates into the fuel lines as well.
Unsurprisingly, the introduction of distillate fuel into the fuel system causes leaks, sometimes excessive leaks. With MGO/MDO there is a very real risk of external combustion or fire. Replacing “O” rings at the manufacturer’s recommended intervals has proven not to be adequate.  For example, in the case of injector “O” rings on a ship, the manufacturer suggested interval for replacing fuel injector “O” rings is 10,000 hours. The engineers on this ship found an interval of 2,000 hours was more appropriate to change injector “O” rings to prevent potential fire hazards. These fuel leaks tend to disappear when engines are switched back to the heavier fuel oil.

GROUP 4
Failures resulting in LOP are associated with the loss of fuel oil pressure or the loss of flow in sufficient quantities to maintain operation. Strainers and filters or the lack of a strainer and filter contribute to clogging or restrictions in the fuel oil supply system.  The MGO/MDO acts as a solvent causing a de-coking effect, clogging fuel filters. This is due to burning a lower grade of HFO that has excessive amounts of asphaltenes. These asphaltenes adhere to the inside of the fuel lines and assorted other fuel components. When MGO is introduced the asphaltenes are released, collecting in the fuel filters/strainers.
In recent years due increased demand for Marine Gas Oil(MGO), refiners have been squeezing more MGO out of the raw crude per barrel than ever before. While blenders/suppliers are wresting every dollar from product, there is a downside.
Within the last 18 months the issue is the difference between pour point and the cloud point of fuels which was fairly close, +/- 3°C; however, since the implementation of the ECA’s globally, this difference has expanded and can now be 20°C to 30°C higher than the pour point. This leads to waxy formations in fuel system strainers/filters, resulting in loss of power and propulsion. Heating the fuel past its cloud point could reduce viscosity which is addressed in Group 3.

GROUP 6
Failures resulting in the Loss of Propulsion appear to be associated with mechanical failure not associated with other groups. Since implementation in 2009 there have been many and varied reasons for ships suffering a Loss of Propulsion incident. Three scenarios stand out as most prevalent for determining risk:
1. 70% experienced during inbound Transit.
2. Most occur during slow speed maneuvering.
3. Duration of transit/complexity of maneuvering.

Having defined the groups of LOPs, the intent of this guide was to reduce the LOP incidents occurring within the state of California boundaries.  For California, many of the LOP incidents that occurred since 2009 involved “First Timers” (ships making first entry into California waters since July 2009). Since California sees between one to two first timers per week, a guide was created to provide suggestions for ships working with low sulfur distillate fuel oil (LSDFO), while trying to comply with the assorted ECA’s.
(See Box below)

Initial Entry: For vessels intending to enter the North American, North Sea or Baltic Emissions Control Area for the first time, it is advised the crew should conduct a “TRIAL” (actual) fuel switching within 45 days prior to entering Emission Control Area waters. Run main and auxiliary engines no less than four (4) hours on LSDFO if the ship intends to use distillate fuel to comply with MARPOL ECA regulations.  This will help identify any specific change over or operational issues or problems.

Repeat and Initial Entry
Part One-TRAINING:
•    Within 45 days prior to entering the Ports located within the ECA it is strongly advised ship engineers should exercise:
A. Operating main engine from the engine control room.
B. Operating main engine from engine side (local).
•    Crew should become familiar with “Failure to Start” procedures while maneuvering and establish corrective protocols for “Failure to Start” incidents.

Part Two-While Underway after Fuel Switching Completed (HFO to Low Sulfur Distillate):
•    Ships should ensure one of the senior* engineering officers is in the engine control room while the vessel is in pilotage waters and be:
A.    able to operate the ship main engine from the engine control room.
B.   able to operate the ship main engine from engine Side (Local).
*Special Attention to the MLC 2006 Regulation 2.3- Hours of Work and Hours of Rest, shipboard Chief Engineers and Masters are considered seafarers and not exempt from minimum rest requirements.

Ships choosing to use these guidelines will alleviate some of the LOP incidents occurring. It is a shared belief that it will only take one LOP incident to change lawful maritime trade internationally. Any reduction of a Loss of Propulsion incident is one less chance of catastrophe.

Captain Jeff Cowan graduated from the California Maritime Academy in 1975, ultimately earning and sailing on his Master’s license. He remains involved in maritime issues and is a regular contributor to MarineNews magazine,  sister-publication to Maritime Reporter. 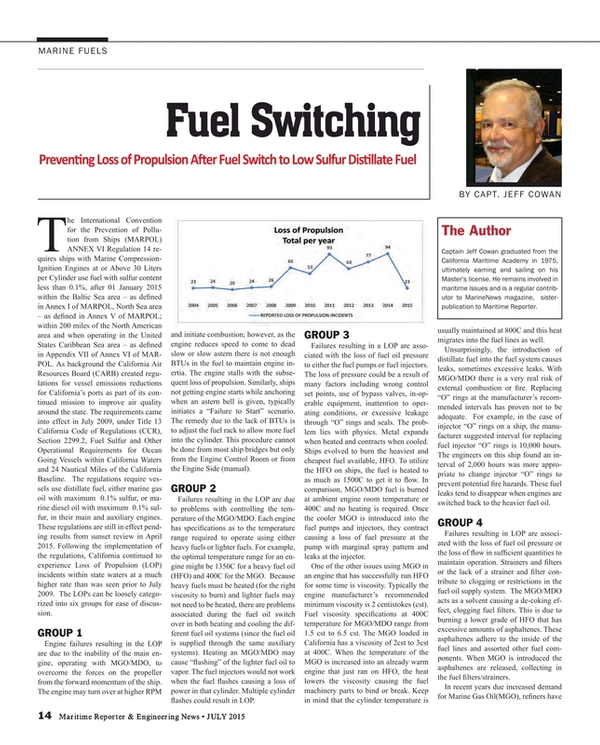