In connection with the Nor-Shipping Conference and Exhibition held last month in Oslo, Remi Eriksen, the newly appointed Group President & CEO of DNV GL, took the opportunity to present himself to the international maritime media. Eriksen will take over on August 1, 2015, from retiring Henrik O. Madsen.
Eriksen has a solid 22 years track-record in leading positions within the group, gaining extensive international experience in the oil & gas, maritime, and renewable energy industries, and has led the operations in Asia, Europe and the Americas, based in Oslo, Houston and Singapore. In 2012 he became CEO of Maritime Oil & Gas. In his current role as DNV GL Group Chief Operating Officer he has lead the post-merger integration work and to create modern state-of-the-art risk-based rule sets combining the rule sets of GL and DNV.
“This is a key market deliverable which will become available during the year, and to come into force early next year.” Eriksen believes the future will be characterized by a complex and fast changing world. “We will see lower growth compared to what we have seen in the past four years. But I think the world economy is still on track to more than double in size over the next forty years. I also see a future in which digitalization, connectivity and internet of things,” he said. “We will see an update of more low carbon fuels in combination with battery hybrid technologies, which will offer reduced emissions, reduced operating costs and of course enhanced functionality. With the exception of a few segments like the tanker segment, some niche segments like cruise, partly the container segment and the mid-size LPG segment, we will probably see 2017 before we will see an upswing in newbuilding ordering again, but it will not be to the levels, we think, that we have seen during the past 10 years. Regarding the low oil prices, he noted that “for many parties within the oil and gas industry it will become worse before things are getting better and we think it will be later part of 2016 before things are trending in the right direction again. And when it comes to rigs, well, I think it will take even longer time, probably until 2018 at the earliest.” He has set his main priorities as CEO to promote a continued commitment to quality and maritime safety, continued investments in research, development and innovation, and a customer responsiveness and service level ‘second to none’.

‘Shipping 2020’ Report Update
Tor E. Svensen, CEO DNV GL Maritime, gave an update on DNV GL’s view on maritime developments, comparing with the predictions made in the ‘Shipping 2020’ report, published in 2012. “There are some trends that are coming stronger than we had expected when we did the work in 2012. In particular there is the whole issue on connectivity, big data. That is evolving much quicker than we thought three years ago. The other area is hybrid designs, the combined conventional engine technology and batteries, and the potential to run ships more efficiently and more economically. This has happened much faster and is really a direction of the future. He noted that pure electric ships seems not to catch the mass market in the same rate as hybrid solutions. “We believe that the battery technology will develop even more. During the last four five years the price has come down by 60-70%. Within the next four, five years it will probably half again. The energy density will increase maybe by 50%-100% over the next five, ten years. He admits that the development in the LNG development has been slower than they predicted. “We made a prediction of 1,000 ships by 2020. It will probably be more like 500-600.” Regarding scrubbers, they had predicted that scrubbers will come after 2020 with the global cap on sulfur emissions. “I think we have seen that the scrubber technology development is happening faster. There are a lot of projects, retrofits and newbuilding installations at the moment. “Costs are coming down for high-speed ship to shore data communication, and this type of communication is today taken for granted. This has given the opportunity to combine different types of data, and to start optimizing the ship and voyage in a quite sophisticated way.” He noted that this will offer the opportunity for malicious attacks, and attempts to actually control or damage ships or property. The area of cyber security will see a lot more attention in the years to come, addressed in the rules rules and procedures. There are work ongoing. He also told the maritime media that DNV GL does not anticipate the oil price to hit the $100-120/bbl within the year 2020 horizon. 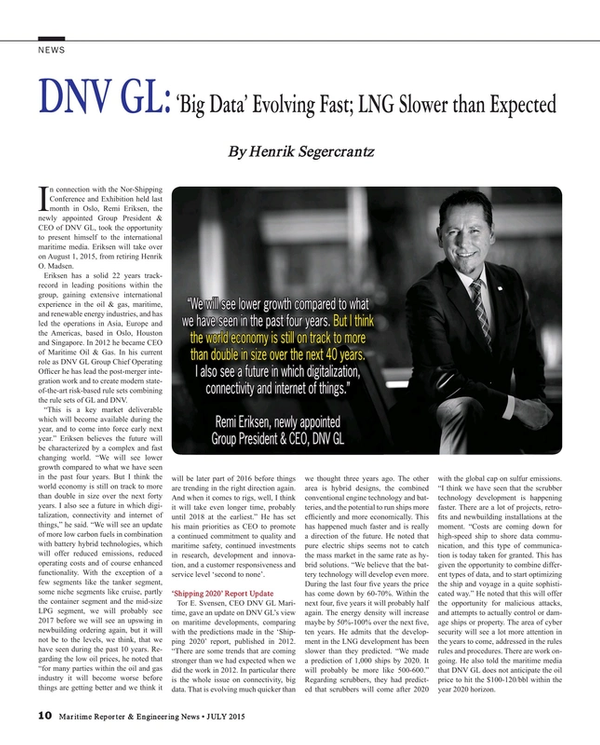