With its coastline of 7,800 km, Italy is expediently nestled in the heart of the Mediterranean Sea with the surrounding waters creating a tremendous resource for Italian economy. Businesses linked to the sea, including ocean technology firms, contribute significantly to Italy’s gross domestic product totaling more than $40 billion and representing 2.6% of total GDP. The ocean technology industry of Italy significantly comprises of:
•    Ship and Boat Building
•    Technological Equipment
•    Maritime Defense and Security
•    Marine Science and Observation
•    Offshore Renewable Energy
•    Marine Technologies
The Italian shipyard industry ranks among the top 20 in the world with ship building and boat-building accounting for 64% of the industry turnover, totaling 6.3 billion Euro in 2012, and Technological Equipment placed at 2.2 billion Euro. Italy is also a world leader in yacht production with more than 49% of the market share.
There is a high level of investments (of around 550 million Euro) in projects and strong links between manufacturers, research bodies and institutions together with high quality research in marine science, new materials, systems and defence and security which is one reason for the country continuing to maintain its leading position as a ship builder. Fincantieri Spa, D’Apollonia, Rodriguez Spa, Ferretti Yachts, Azimut-Benetti, Leopard Yachts and FIPA Group are some builders who are established undisputed leaders in the world of shipping and marine defense.
Italy’s worldwide trade touched 14.4 billion Euro in 2012 backed by approximately 8,700 Italian companies with a workforce of 55,000 employees operating in this marine technology sector. Of this around 10% is said to be dedicated to R&D of new technologies.
Most Italian companies that operate in the ocean technology field are involved in developing specific technologies and undertake numerous research projects. R&D in marine technology is said to have generated 2,148 patents and industrial designs since 1989; 46% of which are related to ships and/or other vessels and navigation devices, 27% on propulsion or guides for boats, and 22% on launching, hauling dry, floating docks or ships, rescue at sea, equipment to sit on or work under water and to retrieve or search for submerged objects. R&D continues to register high performance securing a 6% growth rate in the number of industry patents.
Italian companies have created a name for themselves in the field of Maritime Defense and Security, having made significant progress in radar systems and in the development of new technologies for remote-controlled boats-drones, deep water hulls and submarine drones. In the area of marine sciences, research is focused on sustainable fishery and deep sea floor investigation to study earthquakes and exploit the subsoil (OGS).
The fact that there are few large companies as is evident in several other sectors in Italy, many SME’s have joined forces to create clusters and make better use of their expertise and capacity in the field of ocean technologies.
The eleven outstanding clusters that represent the core of national production have to a large extent received support and assistance by a body/agency recognized by the Italian Government to coordinate activities.
Currently, Italy has no active offshore wind farms even though there is a compelling need of finding power supplies other than oil imported from abroad. Having rejected the nuclear solution after the Fukushima accident and the 2010 ban on offshore drilling following the Deepwater Horizon disaster in the Gulf of Mexico, the LNG facilities are heavily pushed forward by the national government. Italy is currently being connected to Greece via the IGI project (Interconnection Greece – Italy) for the import of natural gas in Italy through Greece. In the final analysis the country remains heavily dependent on foreign reserves for about 90 percent of its energy needs.
Italy boasts of a strong merchant fleet (around 600 vessels) which is the fourth largest in the EU in terms of vessels. Italian ports offer more than 1,100 places of boarding and 282 km of quays. In 2008, Italy accounted for the second largest weight of Short Sea Shipping (SSS) of goods in the EU-257. Six Italian ports appear in the top-20 port list: Trieste, Genova, Augusta, Taranto, Venezia and Gioia Tauro. In all six ports SSS prevails over ocean shipping (whereby SSS represents more than 90% of Italy’s total seaborne transport of goods). The port of Gioia Tauro specializes in SSS of containers, with only 14% of containers being ‘ocean bound.’
Italy’s geography provides abundant access to marine fishing. The country’s fishing fleet consists of around 14,000 vessels with catches of nearly 300,000 tons in 2012. Except for around 30 oceanic vessels, the Italian fishing fleet operates in the Mediterranean Sea basin: more specifically, the majority of these vessels operate in waters around the Italian peninsula. Moreover, Italy is by far the largest player in the Adriatic Sea. In total, around 50,000 people work in the fisheries industry. The current trend in aquaculture is to reduce plants on land or along the coast and develop deep-sea activities, like offshore cages to be used for sea farming. Total aquaculture production in 2008 was approximately 181,000 tons. The country’s maritime sector is likely to see bright days ahead. The government appears to be ready to take on the country’s energy deficit, starting with new calls for investment and a reversal of the offshore ban. There are clear opportunities for increased cooperation and networking both on a political and industry level. The industry is hopeful and expects to see more aggressive development in time to come. 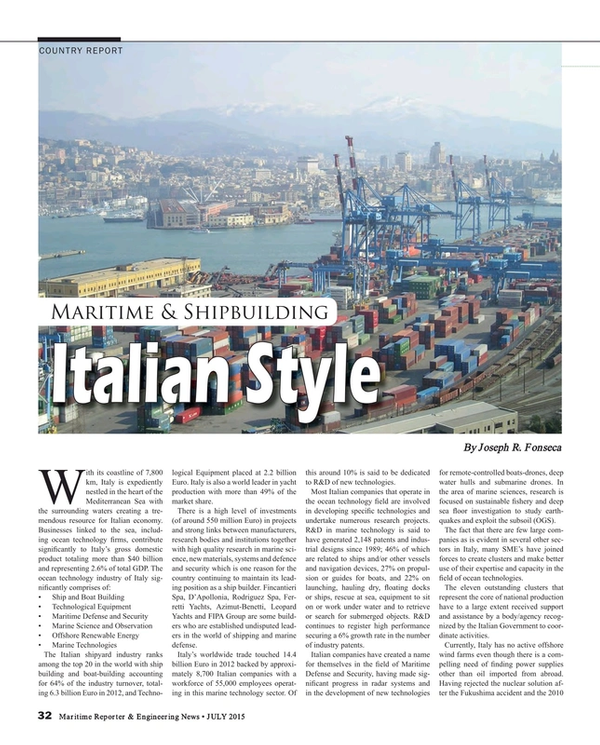