The Maritime Launch of Big Data

It’s no coincidence that Class standard bearer DNV GL’s incoming group chief exec, Remi Eriksen, is a former telecoms engineer who knows his way around Houston (IT) and Singapore (yards). After all, the satellite communications industry understands shipping. The reverse should also be true. Speaking ahead of his first day as CEO, Eriksen describes a future of “fast ships and slow growth” — not bandwidth growth, mind you. Satellite operators, network providers and other vendors are eying broadband for Big Data transfers.


“I also see a future for the connected ship,” Eriksen adds, a nod to the coming battles to “define shipping.” The incoming Class boss, his counterparts in the world, and the rest of the supply chain face an oceangoing industry eager to define the benefits of broadband in operations. Bandwidth for crew communications and morale is already cheap, plentiful and accepted.
Eriksen steps back from the podium, and DNV GL’s outgoing Maritime CEO, Tor Svensen (the new Group Executive VP), admits the society erred in a 2012 survey, when it underestimated the impact of Big Data on ships. Technology developed much faster than expected, said Svensen.
“Everything became software-driven, from the chips on equipment to networks of equipment sharing with each other. It’s now taken for granted that we have onboard coms and massive data, where recently there was little.”
Svensen refers obliquely to the newly pervasive satellite-enabled shore monitoring of vessel manifest, performance and location data making maritime management for everyone a little less laisse-fair. Yet, while better broadband access via always-on Ku- or Ka-band have grown channels for Big Data, the jury seems hung on where the most value is in the “constant coms” used and generated by a ship (and its Internet of Things). Bandwidth to monitor motors and men isn’t loved by all, yet it’s the reality in some fleets. Numbers are clearer for crew-use Sat-Coms, but operational data-transfer demand is on the march.
“Today, you need a big IT unit just to filter out the junk,” said Svensen of bandwidth shared by crew and ship.

Price Patterns
The standard setters enabling the transfer of operational data are the Sat-Coms supply chain, not Class: satellite operators Inmarsat, Intelsat, Speedcast and others; network service providers KVH, Marlink, Cisco and equipment vendors (Kymeta, Shakespeare, Intellian). It’s been 30 years since the first Ku-band VSAT (receiver) was built to connect offshore units by network. Now there are 13,000 installed VSAT terminals and 70 VSAT service providers: They can do much more than “separate the junk” from Big Data generation.
Yet, for ship owners, the industry presents “an IT unit” and its cost, and they already feel pressed by the “80 percent” hike in fuels costs wrought by cap rules on emissions. A superior engine might bring savings, but measuring its voyage performance from shore ought not to be something the ship owner pays for. The future of maritime Sat-Coms, both Big Data and crew, is about sparing the ship owner. Inmarsat Maritime president, Ronald Spithout, says he sees a future where the costs of satellite comms is packaged off into the offerings of service providers. After years of falling bit-per-hour prices for VSAT Ku and Ka bands and rising satellite operator fortunes ($750 million in 2014, says Euroconsult), the ship owner is, henceforth, to be spared. That’s the budding consensus we detect.
“I see massive change coming,” said Spithout. “You see it every year, that the ones relying on the service most are application providers (app designers) with embedded air time in (their app). You don’t worry about the satellite time because you don’t see it.”
So, those wanting to sell mobility packages (with content) to the ship owners will pick up the background satellite stream costs. This, Spithout suggests, may free ship owner capital to focus on the fleet data issues of performance and management.

Satellite Spreads
Meanwhile, the count of vessels using a VSAT network have shot up to 20,000 from 8,000 eight years ago, according to IntelSat. Chris Insall of Intelsat offers a detailed picture of VSAT’s recent “remarkable growth.”
“We have seen a doubling of revenues recently,” he says. By 2023, Insall sees revenues tripling and the core business of Ku-band continuing to grow. While L-band, the staple of voice and email, has its share of offshore supply vessels (and “the conservative Greeks”), VSAT remains 80 percent of the business. Insall says VSAT took off because it marked a 40 percent cost reduction. Paradoxically, just 10 percent of it was “crew welfare.” Insall admits “The Maritime Convention became a key driver.” Gearing up for a future wave of bandwidth demand, IntelSat is building and launching a new, conventional satellite (not the EPICNG high-throughput satellite set to launch in 2016) for better capacity over the North Atlantic, the Mediterranean and Panama.

Network Upgrades
A next driver of sales for the IntelSats, Inmarsats and other satellite operators is Big Data. The vendors of VSAT (Ku, Ka and C-bands) — with its 1 megabit per second network speeds (versus 256 kilobit-per second L-Band) — are part of a slew of service providers the shipping industry will have to trust.
Flush with crew coms sales but needing to be in on Big Data, IntelSat is helping those service suppliers make the most of its greater satellite throughput by offering a shared broadband infrastructure package called IntelsatOne FLEX. Few bandy about the amounts of data a modern vessel might soon generate, transmit or become dependent on, but speaking to yard and legal types, another DNG GL man, Albrecht Grell, says he doesn’t see that vendor systems will have to be classed to handle it all. His main concern is with security, as Big Data ratchets up the terabits.
“In shipping we’re not used to managing and studying these high volumes of data,” he says, adding that the data isn’t structured and still isn’t reliable. “It says it’s in Africa, but it’s not.”
The Hamburg-based industry veteran says “volume, speed, type and reliability” need to be worked on. “Fleet data we’re used to. What we see coming now is a focus on managing operations. That’s where we see improvement (in Sat-Coms).”
While, satellite-transfers of fuel-quality, weather or performance data are relatively new ideas, “Beyond this, its analysis, consumption and the ability to benchmark” where Big Data might pay dividends. “There’s no one-size fits all. Integration and quality assurance are needed for a 24/7 customizable Web. It’s a very expensive proposition,” said Grell.
Meanwhile, IntelSat is launching six satellites to 2019, and they’ll have “multiple layers of high-use bandwidth.” Getting service providers on the network is a company priority.
“Each (satellite) delivers 25 gigabits per second (of bandwidth),” said Insall.
That’s 25-times the current standard and “future-proof” for shipping’s Internet of Things.
Still, getting a vessel’s network of digitized equipment tags online requires more vendors — more CAPEX. One by one, SatComs leaders seated along a row of salon chairs admit they can’t just tell owners what they need anymore and then charge them for it. “Data-ownership billing”, one executive says, looks to be the way forward. “We can send the bill to the terminal owner.”

Heavyweight Comms
While 31,500 vessels are said to comprise the maritime VSAT market, Euroconsult Senior Manager Wei Li puts the number of total mobility “addressable vessels” at 121,000, with just 10 percent already using VSAT Ku-band or Ka-band antennas. He sees 65 GBps satellite services by the end of next year, enough for “sensors, crew, cloud, content”, but his audience is made of realists. Just out-of-sight on a stage sunken below the flat floor, Sat-Coms CEOs pass the mic around. Echoing Grell of DNV GL, Inmarsat president Ronald Spithout says, “There’s plenty of (bandwidth) capacity. The key word in future is seamless mobility.” Another we can’t see, disagrees: “There’ll never be enough bandwidth if it’s 500 GBps for every single vessel just for video.” Another SatComs heavyweight weighs in.
“Ku- or Ka-band, I don’t think the ship owners care. It’s what can we do for them.” Another takes the microphone: “It’s good we’re moving from frequency band to increased throughput as our focus.”
Finally, Yale grad and KVH Industries founder and chief exec, Martin Kits van Heyningen, shows he’s bullish on the future of Big Data for shipping. He calls “data capture and send” an “actionable business model” but warns that “operations” means “no SQL databases”.
“Big Data is unstructured and analytical,” he says. “It’s not the daily report.” He points to Formula 1 teams that transfer “and analyze” in real-time 200 terabytes of car sensor data from a given race: “2,000 sensors equals 2.5 gigabits per day,” he says, allaying whatever fear his audience might have of unfathomable amounts of traffic. Much of those listening are already masters of crew-comfort coms.
Van Heningen adds that no onboard IT staff will be needed for shipping’s Big Data revolution — just an onboard server. His KVH multicasting of data from sensors eliminates sending manually. 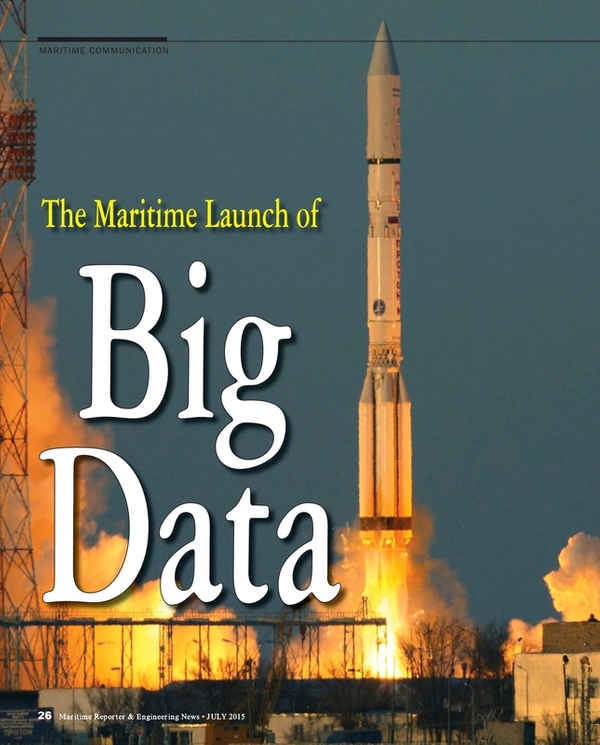