NorShipping debate centers on the matter of ship fuel efficiency

The Immediasea Shipping Debate Forum ‘Fuel Efficiency - The Way Forward’ was held in connection with the Nor-Shipping event in Oslo, Norway, in June. Leading the panel was Mark Fuhrmann from Blue-C who invited leading maritime executives to share their views on the future of shipping fuel-efficiency. Below are select quotes.

“Our goal is clear, zero emissions. It will though take a while getting there.” He reminded the audience that “by 2050 we have to cut off CO2 production completely,” and pointed out that when it comes to relative CO2 consumption there is definitely nothing that beats shipping. “What is a little unsettling for us is that there is a debate underway at IMO around operational fuel efficiency, starting with measuring, reporting and verification of your greenhouse gases, specifically CO2.” He said they were wondering what one actually is going to achieve with that. At the last MEPC meeting there was a lack of policy discussion around this. He also noted the enforcement of low sulfur regulations is starting from a very low point, particularly on the high seas. The industry is concerned, because due to these high potential cost savings there is a temptation for some not to comply.

He pointed out the huge importance on total efficiency of optimizing operations, such as running the engines optimally, as well as ship design, by designing the ship for the speed it uses. “For an LNG carrier we talk about (a design speed of) 19.5 knots. But actually 70 percent of the time they run at 16 or 17 knots. Summarizing the situation with upcoming regulations he noted that to meet the requirement in 2016 and onwards in many areas, and you need to run on HFO you will have to use a SCR to remove the NOx and a scrubber to remove the sulfur. “Then you can go a little bit more expensive and burn light fuel. Then again you need after treatment with a SCR. Or you can go for gas, seen more and more in Europe, with U.S. coming on line.” He though pointed out that after Tier III and Tier IV one would have to meet the regulations in both diesel mode and in gas mode. This is challenging. “Today we have delivered 1,300 dual-fuel engines, and soon we are going to reveal what fuel efficiency really means,” he noted, referring to the ‘world’s most fuel efficient dual-fuel engine’ Wärtsilä was to launch the following day, at Nor-Shipping.

He talked about their Hull Performance Solutions, and on Jotun’s performance guarantee cash-back arrangement for some anti-fouling paint, which have an average payback time of between 9 to 12 months. “Good hull paint is also vital as banks and charterers look at energy efficiency in their decision making.” He noted one can isolate the effect on anti-fouling on hull and propeller performance. “Work on a standard methodology on hull performance monitoring is currently taking place, “to be out as an ISO standard (ISO 19030) most likely by June next year. This standard cannot be mandatory. It has to be voluntary. If you want to measure performance, this is how you do it.”

“What we see coming now, is a much stronger focus on managing operations. “Here we see huge potential still lying uncaptured. How can you put advanced analytics into this picture to really understand what the data tells you,” he asked, and noted they believe in the management of benchmarks, both internally and with the world fleet. “This data gathering task is a multimillion dollar investment and expenditure. He believed most of this work had to be outsourced, and that third part players will have to consolidate in order to be able to sustain the investments required with this type of technology. In the discussion that followed Grell noted the biggest gains in efficiency will be achieved in improving the efficiency of the entire transport chain. “Twenty-two percent of the global bulk carrier fleet is sitting in anchorage waiting to get into port. That is hugely inefficient.”

Topics of discussion included revenue management and what it means as a base for fuel efficient operation, and on ‘Big Data’. The importance of collecting data, both operational and technical, will increase dramatically. He introduced the phrase ‘integrated operations’ as a way forward, “linking operators and owners with vendors and suppliers, service providers.” He also talked about full electric battery storage technology, achieving zero emissions, and lower operational costs. “But the construction cost for a fully battery driven ferry is 30 to 50% higher than that of a conventional ship. We really believe that (battery fueled ships) is where we are going.”

With a mission to focusing on accelerating the adoption of business solutions that reduce carbon emissions at gigaton-scale and advance the low-carbon economy, talked about the three developments as future trends describing the focus on efficiency. Charterers had announced the week before that 20% of global shipped tonnage, represented by 25 companies, are preferring more efficient vessels, thus excluding inefficient vessels from their supply chain. A month ago two leading shipping banks (HSH Nordbank and KfW IPEX) said they use efficiency information in their investment decision making, using a tool worked on jointly with DNV GL. Carbon War Room works also with two Canadian ports which are offering discounts for more efficient vessels. Another current development is on retrofitting technologies for ships. An example is wind propulsion technology, where Norsepower’s now have verified Flettner rotor data. 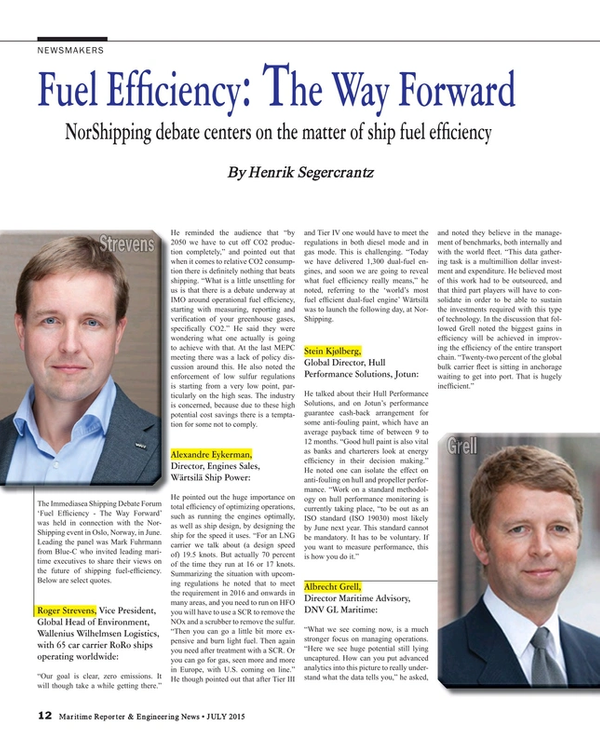