Can Bandwidth Supply Keep up with Maritime Demand?

In the next few years, demand for bandwidth on the high seas will grow, in no small part due to technology that is making operations more efficient and keeping crews and passengers healthy, happy and connected. Just a few years ago, a cruise-going family might have brought a single laptop computer and maybe a cell phone aboard. Today, cruise companies find that the average family shows up with 10 connected devices. And within the commercial maritime sector: crew members, away at sea for months at a time, are hungry for a robust connectivity experience to stay in touch with family and friends.

As our survey of maritime operators with the research firm Futurenautics found, in the next two to three years, there will be a 60 percent increase in ship-to-shore traffic. This demand for satellite bandwidth is being driven by a number of factors:

•The development of VSAT antennas for ships has led to a shift away from traditional L-band connections and to higher-throughput Ku- and Ka-band satellite services. The same Futurenautics survey found that 57 percent of shipping companies have VSAT solutions fitted on their vessels.

•When there is a VSAT solution on board, it always becomes the primary means of communication, with the slower L-band used as a backup.

•Crews are now demanding high-speed Internet connections. In the same survey, 72 percent of crew members said the level of connectivity provided on board is a factor in choosing to work for a ship operator.

•And crews want high-speed connections, with 73 percent saying that the minimum acceptable connection speed for a crew Internet service is 512Kbps.

•In the future, a network of sensors built into the engines and other operating systems of new-build vessels will enable ship owners to capture a range of information (such as Voyage Data Recorder feeds) as well as on-board equipment and cargo status data – requiring even more bandwidth.

Some have suggested that competition from 4G cellular, microwave connections, “internet balloons” and other technologies that support near-shore activities would eat into the maritime business of satellite operators.

At Intelsat, we have experienced the opposite. The more these alternative technologies are deployed, the more end users exploit the growing range of IP technology. Then, when a vessel or rig moves out of range of these on-shore services, the operator has to support up to demand they had to before – and satellite satiates the need. When it comes to maritime communications, at Intelsat, our primary goal is to provide our customers and their end users at sea with seamless bandwidth throughout their passage, wherever they may be.

To that end, our Intelsat EpicNG constellation and associated network is fully compatible with existing Ku-band hardware, networks and terrestrial technology, and is capable of handling increases and spikes in bandwidth demand as a matter of course. So, can bandwidth supply keep up with all this maritime demand? We certainly think so.


The Author
Chris Insall’s responsibilities include complete lifecycle support of Intelsat’s maritime solutions. He has more than 20 years’ experience in the telecommunications industry. 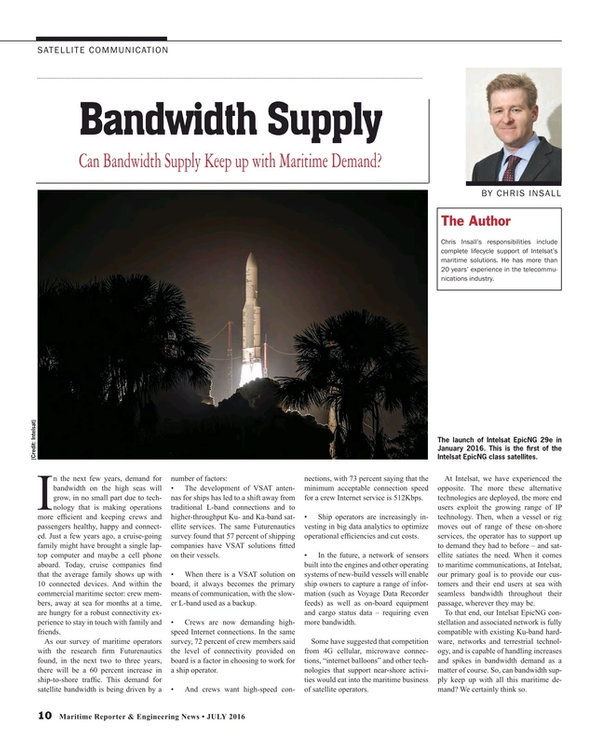 Read Can Bandwidth Supply Keep up with Maritime Demand? in Pdf, Flash or Html5 edition of July 2016 Maritime Reporter