New York Power Authority (NYPA) had a costly and environmentally charged problem. Twice in a decade (in 2004 and 2014) a commercial tugboat dropped anchor and damaged one of its submerged power cables, a critical 7.5 mile stretch of four cables, part of its Y-49 transmission circuit in the Long Island Sound.

The cables are buried 10 ft. deep under the Long Island Sound, and the repair process is time-consuming and costly, taking an estimated five to eight months and “tens of millions of dollars” to fix, according to Robert J. Schwabe, Director, Asset and Maintenance Management, New York Power Authority. More importantly, the cable strikes pose a significant safety and environmental hazard. Safety because the repair process demands divers in the water to jet out the cable, find the break and bring it to surface; environmental because the cables are filled with DCL 45 low viscosity fluid for insulation.
The most recent anchor strike and cable break in 2014 was a game changer according to Schwabe, as it occurred in the dead of winter, meaning the divers were working in arduous conditions, taking two months to jet out enough cable to find the fault. In the meantime, thousands of gallons of DCL 45 fluid were  released into the Long Island Sound. To help avoid future anchor strikes and mitigate the financial and environmental costs, Schwabe and his team sought a solution.
“After this event I started looking around and said, ‘We need to have a better system to detect the potential (of a vessel) anchoring in the cable field,’” said Schwabe. For the system to work, it had to be automatic and ‘on’ 24/7/365. Enter Vesper Marine WatchMate Asset Protection.
Virtual Beacons
Maritime Reporter & Engineering News was on the Long Island Sound with NYPA’s Schwabe and representatives of Vesper Marine late last month as the new system for NYPA was in its final stage of approval, acceptance and implementation. Integration of the Vesper Marine system is part of NYPA’s Strategic Vision 2020 plan to use existing and emerging technologies to make its transmission system more resilient and reliable.
In reality the solution is elegant in its simplicity and customizability, using two land-based communication towers to establish a set of ‘virtual beacons’ on the water clearly marking the cable field, as well as establishing a wide buffer zone that is clearly seen on commercial vessel’s electronic charts. The system from Vesper Maritime is anything but passive, as it monitors vessels 24/7/365, monitoring vessel speed and taking into consideration tide and wind conditions. A set of web-based software rules created by NYPA and Vesper determine if it appears that a vessels is likely to anchor in the cable potential strike zone. The true value of the system comes with the rapidity of the warning, as a safety message is delivered automatically and directly to the bridge of the commercial vessel warning it of the dangers below, and copied to NYPA as well.
“There were other systems that offered notification, but they first notified the Coast Guard and then the vessel, which could take up to half and hour,” said Schwabe. “You don’t have that much time.”
The system comes complete with an information back-up and archive.
(As published in the July 2016 edition of Maritime Reporter & Engineering News) 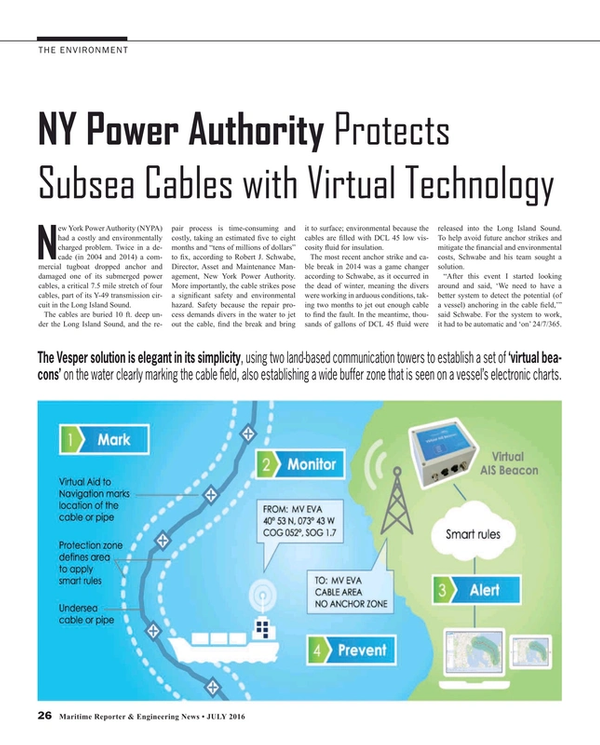