Safety and Preparation on the Brownwater Radar

Weather Channel Forecasters are predicting a “near-average” hurricane season for 2016, but warn that an average season does not mean businesses and residents shouldn’t prepare for the worst. While it is unclear whether the season, which began June 1, will bring about a few mild storms or a catastrophic Category 5 hurricane, one thing is for sure: safety and preparation are on the radars of the owners and operators of brownwater vessels.

It’s Hurricane Season. What’s in Your Safety Plan?
If there was one positive outcome to the catastrophic devastation that Hurricane Katrina caused over a decade ago, it is an increased focus by vessel owners and operators on hurricane safety and preparedness planning.
When developing a hurricane safety plan the following should be taken into account:
The Author
Damon Vaughan is senior vice president at Tidal Marine, a commercial marine insurance program administered by Venture Insurance Programs. He has specialized in marine business, both primary and reinsurance for 20 years, working in London, Bermuda and New York. Tidal covers a wide variety of commercial marine vessels including supply, utility, and crew boats, to tugs and barges.
(As published in the July 2016 edition of Maritime Reporter & Engineering News) 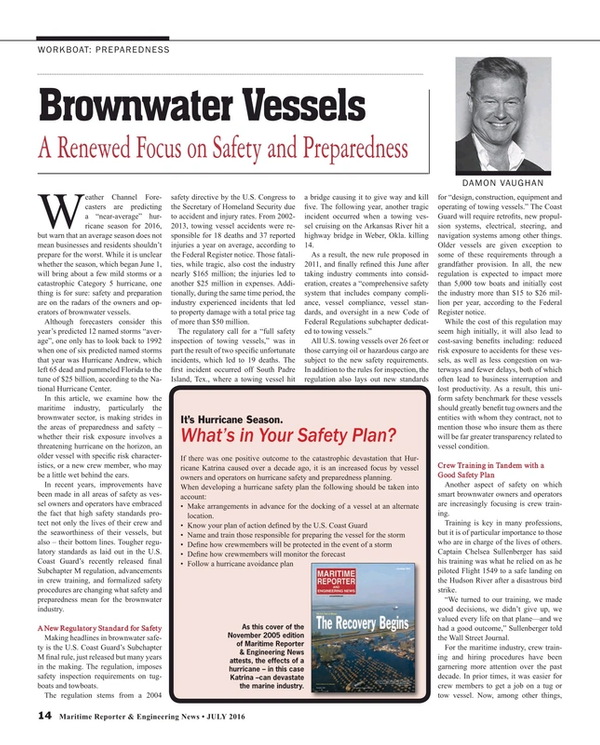 Read Safety and Preparation on the Brownwater Radar in Pdf, Flash or Html5 edition of July 2016 Maritime Reporter