Maritime Reporter & Engineering News caught up with Frank Coles, the ubiquitous leader of Transas, fresh from his company’s user’s conference in Malta. In typical candor, Coles paints his picture of maritime and shipping’s future.

With a captive audience of more than 400 clients in scenic Malta for several days earlier this year, one might be surprised when Frank Coles admits that the meeting was not all about Transas. “I wanted something completely different. I didn’t want to talk about Transas, I wanted to talk about the industry and what we can learn from aviation. I wanted to talk about what we are we missing.”
And so starts another candid conversation with Coles, a corporate leader that speaks with a Steve Jobs-like vision and zeal when discussion turns to the future of maritime.
“Everyone’s talking about ships, ship technology and autonomous ships, but no one is talking about why we should be doing these things. What is the business model? We’re all missing that point. If we are ever going to have unmanned ships, can you see the United States, can you see the Chinese allowing an unmanned ship to simply sail through territorial waters without some sort of ship traffic control?,” Coles questions. “It is unthinkable. So the whole world has to change. So you can have an unmanned ship, but you have to envision the structure that goes with it.”
Maritime vs. Shipping
Coles is clear from the start to differentiate between ‘shipping’ and ‘maritime.’
“I live in the United States. When we talk about ‘shipping’ something in America, we talk about using FedEx. When we talk about shipping something, we talk about moving it from the west coast to the east coast. That’s shipping it, whether by truck, train, plane or ship. Shipping is the movement of the goods and anything economically associated with that. Maritime is the water transport piece,” said Coles.
Distinguishing the terms is important according to Coles, as he said the economics of shipping and logistics is much more compelling for change than is the economics of the ‘floating truck.’
“You see the economics of shipping changing faster than the technology an innovation in the maritime part of shipping.”
But while Coles is looking big picture, make no mistake that he sees Transas firmly in the maritime realm. “Transas belongs in the maritime industry, so Transas’ role is about the ecosystem of the new world; that being the ship talking to its operation center, the way that it is evolving in the container shipping and cruise sectors today. Transas is an enabler from a software perspective and from an artificial intelligence perspective. But Transas has two other key elements to its business: Vessel Traffic Systems which is, by another name, is ship traffic control. The other part is the simulation.”
Disruptive Disruption
When asked regarding his thoughts on “Disruptive Technology,” the term of the day in maritime circles, Coles is blunt: “It doesn’t mean anything. ‘Disruption’ means something to me.”
When talk turns to disruption in maritime circles, it often is technology centric, hand-in-hand with the ‘Big Data’ discussion. But Coles sees it differently. “Disruption means you don’t see it coming. It means it comes from outside, not from within. It comes from people who have no respect for the so-called special position that those that are traditional within maritime think they are. They have no respect for history and they will come in seeking an easier, better, simpler, smarter way to remove the middle man. This industry is full of middle men. Disruption will come from changing the process and changing the business model. It is not the technology, it is the model, it is the process that changes.”
Specifically, Coles envisions a world where the ecommerce giants, the Amazon’s and Alibaba’s of the world, increasingly gain control of the various transport segments to ensure that their supply chain is delivering to a greater degree of efficiency. “There could a time when they move into maritime shipping, and they’re not going to rely on the stevedores that go on strike every so often and screw up American trade,” said Coles. “They’re going to get their own port, or they’re going to get their own wharf and they are going to control their own port. It is inevitable. (In addition) the freight forwarder is dead in my view. It is inevitable that more cargo booking, cargo management and cargo control will be online.”
Think Global, Act Local
As the oft-characterized ‘conservative’ maritime market digests a historic change in operational direction, Coles offers some bold predictions regarding the direction:
While the younger generation is generally viewed as the hinge to driving change, a big wild card in the pace of change remains the regulators. “When a lot of the old guys are gone, change will start to happen much quicker. What I haven’t factored in is whether we can get so far ahead of the regulators, as regulators could be the anchor that drags it all down,” said Coles. “But if Uber and AirBNB can come in and challenge around regulation, there is no reason why the disruptors won’t come in (to maritime) and find a way to challenge the IMO, to challenge the regulators.
And while Coles thinks and talks ‘big picture,’ inevitably the conversation comes back to Transas, the company he leads. When asked what Transas will look like in 10 years, he is clear.
“It will look like a software business, providing decision support tools; it will be ‘powered by Transas.’ Transas’ strength is the brains behind the decision support that goes on in the industry. Our ECDIS is about the capabilities for the user; our simulators are about the platform for training; our VTS is about decision support for operators; and our fleet operations and artificial intelligence routing that we are building is about enabling the operator to use the tools. The Transas vision is to join the dots so that all four of those work together in an ecosystem that’s not unlike the aviation industry.”
(As published in the May 2017 edition of Maritime Reporter & Engineering News) 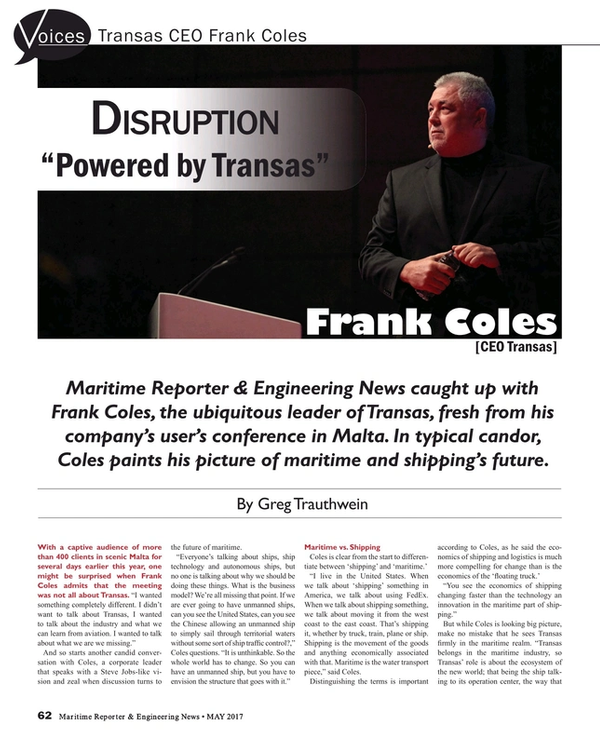 Read Disruption 'Powered by Transas' in Pdf, Flash or Html5 edition of May 2017 Maritime Reporter