As the offshore oil and gas bust drags into its third year, Bollinger Shipyards is holding its own courtesy of a long-running relationship in building for the United States Coast Guard (USCG). In Louisiana, a land where oil and gas, OSVs, workboats and fishing vessels traditionally rule the maritime landscape, Chris Remont ensures that shipyard workers and the locals know well the importance of the USCG business to the company and to the region, with its billboard exclaiming loud and proud, “Welcome to Cutter Country.”
Today Bollinger has 38 Sentinel-class FRCs under contract, with the possibility for 20 more. Remont explains that the contract was split into two phases. “Phase 1 was vessel one through vessel 32; Phase 2 – which we competed for and were awarded – was vessel 33 through the potential of vessel 58,” Remont summarized. “Currently we have through vessel 38 under contract,” with additional contract expected in the coming quarter.
A Maritime Career
Remont entered the maritime industry in the early 1990s after graduating from Louisiana Tech University with a degree in Electrical Engineering. He worked at Bollinger during his summer breaks as an electrician, and in his mind a career in the maritime sector was a no brainer: “I grew up here. This is what we do here. When I started (in the early 1990s, during the last deep offshore energy slump) Bollinger had just been awarded the U.S. Navy PC contract and the only steady work in the area was Bollinger. Ironically, today, the only steady work in the area is Bollinger.”
He has been with Bollinger for three years, having spent the last 25 years working for another big shipyard in the area, working on a succession of large military and commercial contracts, including TAO, DDG51, DDG1000, LHA, LHD and LPD, to name a few.
While the USCG contract is a major Bollinger Shipbuilding focus at the moment, the company historically builds government and commercial work seamlessly, which is no small feat for any yard of any size.
Remont concedes that there is a lot of “red tape” that comes to comparing government work versus commercial work, the biggest challenge he sees is internal. “We are lucky to have this steady work program, which is kind of like a bond; it doesn’t really move a lot but it’s steady, The challenge, as a shipbuilder, is to continuously step up our game.”
When he joined Bollinger three years ago the path was set to deliver each vessel complete and to increase our efficiencies. This contract is repetitive, and the yard delivers a boat every 73 days. “We have 10 boats under construction right now, we recently went to Fourchon to prepare the next one for builders and acceptance trials, last week we delivered boat 23 (USCGC Benjamin Dailey). The biggest challenge I think we have is to not become complacent, to continually strive to be better and more efficient.”
If recent performance is any indication, it would appear that the goal has been achieved.
“We’ve delivered the last five vessels with zero discrepancies, meaning the Coast Guard gets a boat that is 100% complete, there is no extra work later, and typically in a government contract that never happens,” said Remont. “We set our path toward 100% completion and we’ve achieved that now with the last five vessels, so it’s not a trend, it’s a norm.”
Making it Personal
To help combat complacency Bollinger came up with the Sentinel Program, to both incentivize its shipbuilders and to make each vessel more meaningful to them. “Each of these vessels is named for a hero in the Coast Guard,” Remont said. For every vessel Bollinger creates a name board, a 4 x 3 board that describes the ship’s namesake with details of their heroic act. “What we’re trying to do is personalize it for our shipbuilders. It’s not just some big hunk of metal with a bunch of cables, it (the ship) is there for a real reason. We erect these sign posts at each station where the vessel is getting created, and the name board follows the ship, traveling with the boat as it moves through the production line. “Every time our shipbuilders get on that vessel they can read about the person, and understand why we are building it.” When the vessel is delivered the name board is given to the CO of the boat so that they and the crew can be reminded of the namesake, too. Following the delivery ceremony, Bollinger selects one employee from each department who exhibits the same characteristics of the vessel’s namesake, and they are publicly recognized and awarded.
Looking Ahead
Remont said that while there are several major government programs of record out for review and for proposal; most of those would be to the Tier 1 yards, which Bollinger is not, or some of them are targeted toward smaller business entities. “What I have been seeing is a shift toward the smaller business arena,” said Remont. “Those are barriers to entry for the Tier 2 yards. Regardless; the current administration recognizes the importance of national defense, and the vessels we produce here for the U.S. Coast Guard (are multi-function) but are essential in protecting our coast lines. Bottom line: The need for these vessels exist, and the capacity to build them lives in Lockport, La.”
(As published in the May 2017 edition of Maritime Reporter & Engineering News) 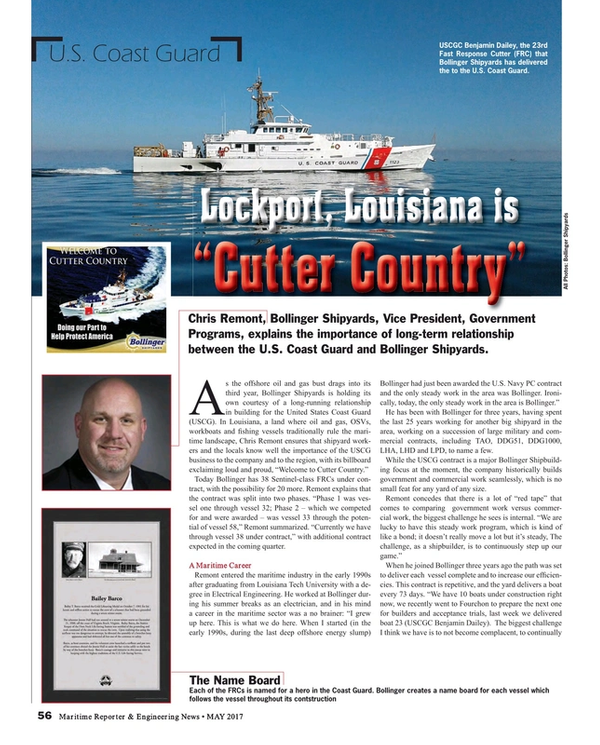 Read Lockport, Louisiana is 'Cutter Country' in Pdf, Flash or Html5 edition of May 2017 Maritime Reporter