As a mix of traditional heavyweights and start-ups fight to keep Norway’s offshore industry afloat, collectively they assess

Swedbank’s chief economist, Harald Andreassen, isn’t “too hopeful” about the long-term prospects for the oil price, but then again, “I’m less certain of this than I’ve ever been as an economist,” he told a floating production conference in Oslo. After two-and-half years of oil-price collapse followed by layoffs in the thousands; stacked oil rigs and order freezes for offshore shipping, price insecurity itself is a partial expression of confidence.
Beneath some palpable yet halting movements toward recovery in 2017, there’s 2016’s rigorous cost-cutting by, among others, Statoil and its subsea supply chain. Lower oilfield cost estimates have been proclaimed (and engineered), and this has fed assertions that pricy technology and extra engineering drove costs until operators backed out of “decision gate.” Andreassen says he doesn’t blame the technology companies. “It was the (oil) demand destruction when oil prices were high” that gutted the oil price and stacked rigs. After seeing companies operate “in debt hell” with inflation pinching, Andreassen now sees “the comeback from hell.”
“If you’ve survived this far, then you’ll come back next year.” He then offered a long-term, ballpark “balance price” for oil at about $60.
That’s twice what oil was in January 2016 and enough for just about everyone. Rystad Energy partner, Lars Eirik Nikolaison, said that when he headed up the number-crunching firm’s New York office (until very recently), he heard the repeated refrain that shale’s $35 breakeven oil price so outpaced deep-water oil and gas, that people kept saying, “Will offshore even be part of the future mix?”
Deepwater’s assumed breakeven of $65 made Norwegians ask, “Have we been priced out of the equation?” Nikolaison says he’s had to tell people that up until 2016, “Shale producers had only been drilling their best wells and spreads,” and that has been shale’s early price advantage. “We’re seeing that the shale costs base increases over the next few years,” although, “As (the industry) recovers, prices will inflate.” Mergers between “SURFS and SPSs” — or subsea service companies and subsea vendors —have eliminated “PLEMS and PLETS,” those costly pipeline end points. Nikolaison has seen that the deepwater costs-curve was down 15% between third-quarter 2016 and Q1 2017. (North Sea rim) offshore projects are now competitive at about $57 oil. At that price, “There are lots of breakeven tiebacks in the North Sea.”
Near Oslo, a handful of offshore start-ups entered the fray just as the still-painful downturn was at its gloomiest. Part of an incubating program called Techmakers, these start-ups are being carefully watched by operators Statoil and Lundin as well as supplier-contractors Aker, Kongsberg, TechnipFMC and Aramco Energy Ventures.
New rig entity Borr Drilling — formed by Tor Olav Troim, a former business associate of ship and rig mogul, billionaire John Fredriksen — is extra bullish on Onshore. Borr will pay $1.35 billion to buy Transocean’s 15 jack-up rigs, including associated debt, five newbuilds and their drilling order book. The new company will own 17 rigs. Earlier in 2016, Borr agreed to buy two Hercules Offshore jack-ups.
The Petoro document that confirms there’s been lots of drilling off Norway lately also adds that much of it has been and will be from oil platforms. Fixed installations are fine for newbie Well Genetics’ DNA-based tracer technology to help oil companies better track reservoirs for increased oil recovery and lower costs. Many oil companies have already reportedly signed with Well Genetics. Many are also cheering the use Big Data monitoring to save cash. After so much automation and “smart fields” digitization, conditions are right for condition-based riser monitoring: enter Vinterfjord, the start-up baby an industry veteran.
Riser installations and maintenance are set to continue apace in Norway, with pipelines — what risers connect to — the only type of investment that did not dip in 2017 over the previous year. Overall, the industry surveys of Statistics Norway put oilfield investments for 2017 at $21.8 billion, 13 percent less than in 2016 on cancelled exploration wells but less a dip than expected. The numbers are seldom weighted against the boomtime 70 percent hike in investments off Norway between 2010 to 2014. Still, spending fell off 27 percent between 2014 and 2016 and we’re on course for 13 percent less in 2017.
Massive Spend
The big dip between 2015 and now was mostly operator cost-cutting. Today, Statoil’s travelling presenters report the average breakeven oil price for its projects has dropped from $70 to below $30, helped by the roughly $20 oil-price breakeven made possible by economies of scale at the giant Johan Sverdrup field, where the first subsea infrastructure, a water-injection template, has just been installed, the first of many. Supplier fortunes are expected to rise in capital-intensive Norway on coming investments in the arctic floating producer, Johan Castberg; the heavily subsea Snorre Expansion project; another gas train at the arctic Snøhvit field and the Troll Phase 3, Part 1 of subsea frames and pipelines.
To help an operator like Statoil gain full oversight of all those projects, new outfit Avito Loops has an integrated cloud solution that lays it all out in plain, detailed view: projects, portfolios, campaigns, business.
Avito shows “your current state” and “your desired state” … A bit like Google Maps, it says, by showing where you are and where you need to go. For aging installations in mature areas, Western Norway newbie, Connector Subsea Solutions, has developed a technique to remotely do pipe repairs in deep water, and contracts with BP and Shell are already bringing in some earnings. While clamping a repair on a horizontal pipe is hard enough, Connector, or CSS, has managed to get its tool to remove the coatings of and then repair a vertical pipe, or riser.
“We’re bullish on offshore,” affirms Rystad’s Nikolaison, emphasizing that, “That’s different than “Goldman. Deepwater, he notes, will see the benefits of the supply chain’s efficiency work to date. There’ll be a rising number of investment decisions by year-end 2017 and rig rates will rise.
(As published in the May 2017 edition of Maritime Reporter & Engineering News) 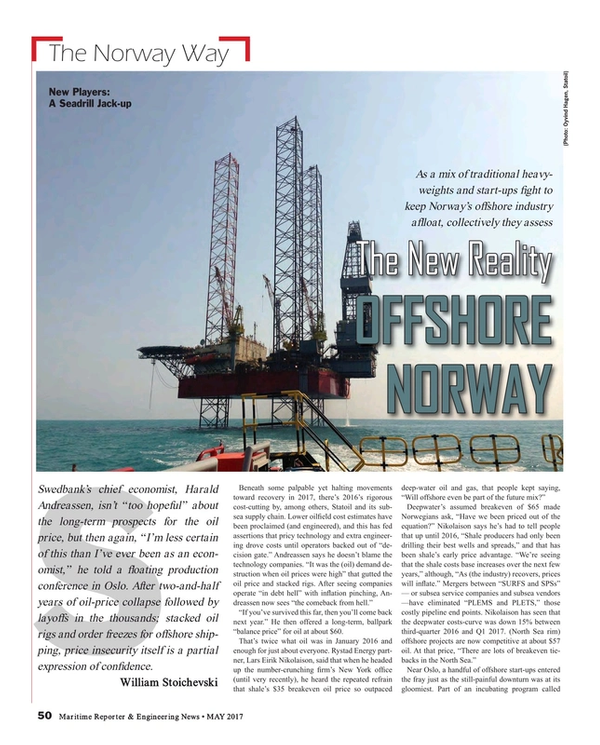 Read The New Offshore Reality in Pdf, Flash or Html5 edition of May 2017 Maritime Reporter