The world of dredging is an ever changing and endlessly fascinating niche of the global marine industry, an indispensable activity essential to keeping world commerce flowing. For insight on recent trends we visited last month with René Kolman, Secretary General, International Association of Dredging Companies (IADC), for his take on a world of dredging challenges and opportunities.

The Arctic port of Sabetta is situated on the Yamal Peninsula, on the western shore of the Ob Bay. The federal objects of this brand new port were developed and constructed between 2012 and 2017 for the Federal State Unitary Enterprise Rosmorport and are part of the Yamal LNG project. This project includes the construction of an LNG plant, gas transportation pipelines and a sea port. Sabetta Port will be used for transporting the LNG gas towards Europe and Asia.
It is impressive work for a project situated in an area with challenging weather conditions for all parties involved amongst which Jan De Nul Group is one. JDN was assigned the contract to perform the capital dredging works in the new port in 2012, 2013, 2016 and 2017. In the summer of 2012, JDN’s first TSHD arrived in the isolated region that is ice-bound for seven to nine months during the year. The Alexander von Humboldt executed the first capital dredging works in the Sabetta access channel. One year later, JDB returned with a total of 13 dredging vessels to continue the dredging works in the access channel and to start the dredging works in Sabetta port basin. In only 10 ice-free weeks, 10 million m³ of permafrost was dredged. In 2016 Jan De Nul Group mobilized no less than 18 dredging vessels to widen the 50km-long sea channel stretching into the peninsula. The basin was deepened up to 15.2m. The access channel was widened to 315m and deepened up to 15.1m. The sea channel was widened from 210 to 295m and deepened to 15.1 meters.
A port expansion project is under way to improve the quality of life for local residents and increase the capacity of Kaohsiung Port itself. It is one of the biggest land reclamation projects in the history of Taiwan. Van Oord’s client, the Port of Kaohsiung, Taiwan International Ports Corporation (TIPC), imposed a strict deadline: the project team must reclaim 250 hectares of land by January 2018. The 37 million cubic meters of sand this will require was reason enough to deploy two of Van Oord’s largest TSHDs on the project: the Vox Máxima and the Rotterdam. Summer is typhoon season in Taiwan, so the team drew up an emergency typhoon plan in addition to the usual safety precautions, which proved useful when Typhoon Nepartak hit during the works. The project team, the crews and the equipment survived the storm unscathed. The reclaimed land will offer space to a string of shipyards and terminals, some capable of accommodating 22,000 TEU containerships. The expansion project will boost Taiwan’s economic growth and ensure that Kaohsiung retains its status as the country’s biggest port.
In La Réunion, France, works are taking place for a major project – the construction of a new coastal road, the “Nouvelle Route du Littoral”. The works were awarded to Société de Dragage International (SDI), which is part of the DEME Group, in Joint Venture. Currently, dredging and backfilling works are taking place for the gravity-based foundations of the viaduct for the new coastal road. For this project, the dredging and civil divisions of Jan De Nul Group have been working closely together in order to optimize planning and execution methods.
In 2017, the Portsmouth Harbor will become the home to two new aircraft carriers that the BritishRoyal Navy is building. Royal Boskalis was appointed by the Defense Infrastructure Organization, a part of the British Ministry of Defense, to prepare the port for the arrival of these ships by widening and deepening the port and the entrance channel. The main challenge involved detecting and removing large quantities of obstructions and unexploded ordnance (UXO). Boskalis developed advanced equipment for this work in collaboration with UXO detection and clearance specialist, Boskalis Hirdes. A large proportion of the dredging work was executed by the trailing suction hopper dredger, Shoalway, and the backhoe dredger, Manu Pekka.
Following the successful construction of the first artificial island of the Americas off the coast of Punta Pacifica in Panama City in the period 2011-2013, Royal Boskalis is currently building a second island, which is expected to be handed over to the client in 2017. Nine hectares of land is being created in the Pacific Ocean by using around 600,000 cubic meters of rock to form a perimeter and filling it with 1.3 million cubic meters of sand. A bridge will connect the second island to the first island. Construction of the second island commenced in April 2015 when the Dutch Prime Minister, Mark Rutte placed the first stones.
(As published in the June 2017 edition of Maritime Reporter & Engineering News) 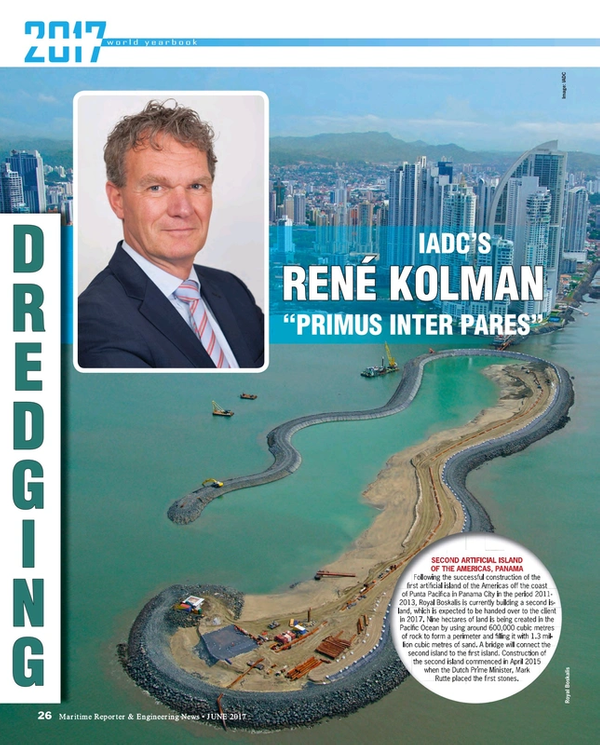