Predicting the Motion of the Ocean

For thousands of years sailors have looked out to sea, anticipating the motion of their craft from the waves they see coming. The nature of this constant motion, phasing in and out with the groups of waves, influences the safety of operations, from moving about the deck or rigging to transferring people and materials between craft. Waves and the resulting motions are a key factor in deciding whether to perform an operation. Could you do better than your eyeball for predicting when that next big wave is going to knock you off your feet?

When the U.S. Navy started asking that question, the scientists and engineers at General Dynamics Applied Physical Sciences (GD-APS) began developing a system capable of predicting these large wave and motion events minutes into the future. The commercial variant of this system, FutureWaves was recently introduced to industry at the 2017 Offshore Technology Conference in Houston. The approach, originally developed under funding from the U.S. Office of Naval Research, uses a custom-designed X-band radar to see waves up to 5 km from the ship or platform where it is installed. With specialized computer processing, the measured wave field can be evolved forward in time, allowing prediction of the precise ship motions over much longer forecast intervals than previously available.
U.S. Navy Seabasing
In order to maintain maximum response flexibility, the U.S. Department of Defense is developing a seabasing capability. A military seabase is a network of ships able to station offshore and serve as a launch point for personnel and equipment to transit to the coast. The seabasing operations necessarily require movement of these personnel, vehicles, and equipment between vessels, a dangerous undertaking in larger sea states. Further, the need for helicopter take-off and landing to support the operations adds additional risk. To promote safety, sea state limitations are placed on these operations. “The Office of Naval Research looked to the defense research and development community to develop a wave measurement and forecasting technology that extends the safe conditions for operation to higher sea states,” said John Kusters, retired U.S. Navy Captain and Program Manager for FutureWaves. “If they know how best to line up their ships for the operation, and then can get a couple of minutes warning for the big waves and motions, they can push those sea state guidelines higher.”
Under this Navy Environmental and Ship Motion Forecasting (ESMF) program, the core system was developed and demonstrated in a series of sea tests, including skin-to-skin seabasing transfer operations. “During these exercises,” said Kusters, “we encouraged the ship operators to interact with the system, and got excellent feedback on how best to tailor and present the system output in the [User Interface]. This was very valuable for system development.” As the Navy research program is now transitioning to installed systems for the operational Navy, the FutureWaves commercial variant of the system is also being rolled out.
How it Works
At the core of the FutureWaves system are several key enabling technologies developed by GD-APS. The first is a customized X-band Doppler radar capable of sensing inbound ocean wave motions out to ranges approaching 5 km. The radar’s azimuthal sweep rate and range resolution are set to adequately sample the local wavefield in space and time. Doppler scans are fed into a suite of real-time filtering and processing algorithms that translate the radar data into forecasts of surface wave elevation maps and ship hull forces. The radar-to-wave processing scheme uses an innovative least squares inversion to determine the underlying propagating components of the wave field, and these waves are evolved forward in time according to ocean wave propagation physics. A precalculated database of wave interaction forces with the ship is used to produce a rapid prediction of the ship’s motion that will be induced by the predicted wave forcing. These continuously updating ship motion predictions can then be used to inform the timing of ship operations. Although maximum forecast time varies with sea condition and vessel speed, the FutureWaves system has been demonstrated to provide accurate, phase-resolved wave and ship motion forecasts to several minutes into the future.
The system also produces a directional power spectrum of the ocean waves, a map of where the wave energy is coming from and at what wave period. This wave spectrum data is fed to the ship motion model to produce a plot of the statistical representation of the ship motions as a function of ship heading and speed, allowing selection of ship orientation to minimize particular modes of motion. This planning tool is continuously updated from the radar-calculated directional power spectrum, and can also be fed wave spectrum forecast products to inform longer term planning.
Commercial Applications
It is not hard to conceive of an array of applications for the FutureWaves product. “The interest in the product at OTC2017 was overwhelming, and from all directions,” said Kusters, “from folks involved in offshore construction, production, and logistics support. Again, it comes back to enhanced safety of operations, and expanding the operating envelope.” While GD-APS is just now engaging the commercial market for FutureWaves, they are braced for a strong pull from industry. They are managing strong interest from offshore oil and renewables, and starting to engage with the cruise and commercial shipping industries. “As the Navy continues to pull for ever-expanding applications of this technology,” says Kusters, “we expect the same from the commercial side. We can envision a future where this technology is a vital component of the navigation tool suite expected on every ship’s bridge.”
The Author
Ben Connell is an Ocean Engineer based in Groton, CT, specializing in seakeeping and ship hydrodynamics. He studied Physics at Middlebury College in Vermont and received his PhD in Ocean Engineering from the Massachusetts Institute of Technology. He now works in research and development for General Dynamics – Applied Physical Sciences Corp.
(As published in the July 2017 edition of Maritime Reporter & Engineering News) 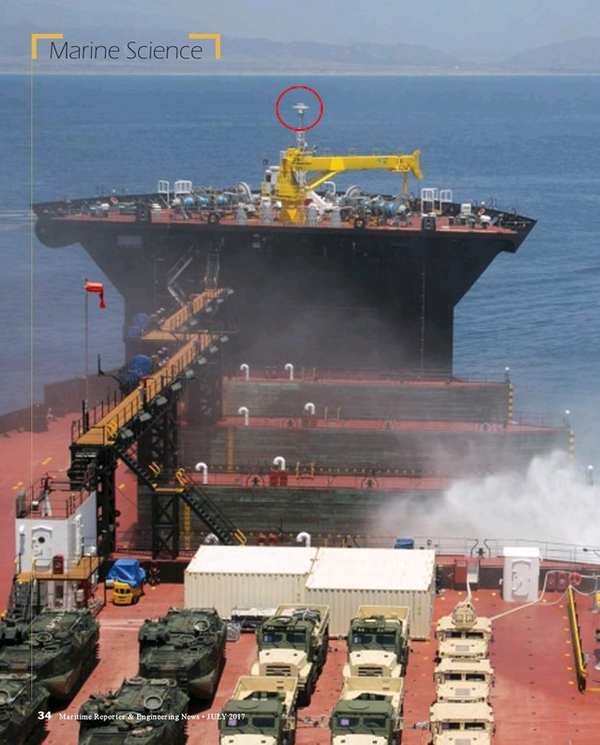 Read Predicting the Motion of the Ocean in Pdf, Flash or Html5 edition of July 2017 Maritime Reporter