Preventing Maritime Vessel Explosions – The Role of the Marine Chemist

A collaborative effort by the Marine Gas Hazards Control Program

With advances in technology, increased regulatory requirements for training, and an industry that has been committed to improving working conditions, especially those associated with confined space entry and fire prevention, why are we still seeing maritime related fires and explosions that often include serious injury or loss of life?

History
Following the First World War, as cargo vessels, particularly tank ships, were being converted to carry larger cargos, the incident rate of fires and explosions during shipbuilding, repair, and conversion began to rise. Vessel owners, shipyard owners, and their insurance underwriters became increasingly concerned over the fire and explosion hazards associated with shipyard employment, and NFPA (National Fire Protection Association) shared their concern. In 1922, NFPA’s Marine Committee adopted a series of standards known as the Regulations Governing Marine Fire Hazards. Appendix A of those regulations addressed the control of gas hazards on vessels during repair activities and would eventually become NFPA 306 (Control of Gas Hazards on Vessels). With the adoption of these requirements, the maritime industry needed people with specific technical knowledge and skills who could ensure that these fire prevention requirements were followed. The American Bureau of Shipping (ABS), which establishes and maintains minimum standards for construction and operation of ship and offshore structures, already had a cooperative relationship between ship owners and shipyards, and it agreed to initiate procedures for certifying specialists (then called gas chemists) who would use and essentially enforce the standard on a daily basis. The first 25 gas chemists were certified by ABS in 1922. This arrangement worked for a while, but it was an activity that was outside the ABS mission. By the early 1960s, ABS was seeking a successor to manage the program. That’s when NFPA stepped in. To this day NFPA continues to oversee the Marine Chemist Program through the Marine Field Service and Marine Field Service Advisory Committee (MFSAC).

NFPA’s Marine Field Service reflects the partnership that NFPA has forged with the marine industry and the government, one with a shared goal of eliminating confined space accidents, fires and explosions on vessels during shipbuilding and repair without any expense to a governmental agency. In fact, neither the Marine Field Service nor the Marine Chemist Program would exist without the support of the marine industry. When NFPA’s Marine Field Service was created in 1963, marine industry stakeholders agreed that those who use the services of marine chemists should contribute to the costs of NFPA’s certification program in proportion to their use. A surcharge for every survey completed by a marine chemist is paid into a fund administered by the Marine Gas Hazards Control Program (MGHCP), which is comprised of representatives from the American Bureau of Shipping, the American Petroleum Institute, the American Waterways Operators, the Chamber of Shipping of America, and the Shipbuilders Council of America. The MGHCP fund supports marine chemist training programs and other efforts to continuously improve the program.

Making sure the work can be done safely is the job of NFPA-certificated marine chemists. They safeguard maritime and shipyard workers against a vast array of potentially harmful chemicals and their interactions. Only when a marine chemist has certified an area as safe can entry and hot work proceed. Both the U.S. Coast Guard and the Occupational Safety and Health Administration (OSHA) require a marine chemist certificate before a range of repair tasks can begin. Despite the importance of marine chemists to some of the industry’s most dangerous locations and tasks, the group is virtually unknown to those outside the maritime transportation, shipbuilding, and vessel repair industries. In part, that’s because there are only 97 certificated marine chemists in the country. This tiny group of safety professionals is responsible for overseeing work on thousands of vessels and maritime facilities. Marine chemists can be employees of a shipyard or vessel repair facility, work independently, or belong to a group operating under one business name. Chemists are not restricted to a single port; they can cover a large geographic area and can even fly offshore for work on oil and gas drilling and production platforms. Regardless of how and where they’re employed, marine chemists essentially work on behalf of shipyard employees, the Coast Guard marine inspector, the marine surveyor, and the vessel crewmembers by ensuring that confined spaces meet the requirements of NFPA 306, Control of Gas Hazards on Vessels before entry or hot work proceeds.

This unique collaboration of marine industry representatives started the program, audit the program, maintain the program and pay for the program. It works so well that governmental agencies (OSHA and Coast Guard) wrote it into their regulations. So why are explosions with loss of life continuing to occur on marine vessels? In nearly all the incidents it is because industry is not following the program they created and the regulations that were written as a result of their creation. Only they can prevent the loss of life from these catastrophic incidents, such as the explosion that occurred on a towboat on January 19, 2018 which took three lives and injured 5 others. OSHA regulations were not followed. A Shipyard Competent Person did not test or inspect the area for hot work which should have resulted in a marine chemist being called in as a Competent Person does not have the authority to permit hot work in spaces that contain or have contained flammable or combustible materials. As a result of this lack of initial testing and inspection by trained individuals, fatalities occurred.

Industry must adhere to the processes and requirements that they themselves initiated, or they risk the loss of life.

About the Authors:
This article was authored as a collaborative effort by the Marine Gas Hazards Control Program.  The MGHCP is comprised of senior representatives of the shipping industry, shipbuilding and repair and insurance industry. 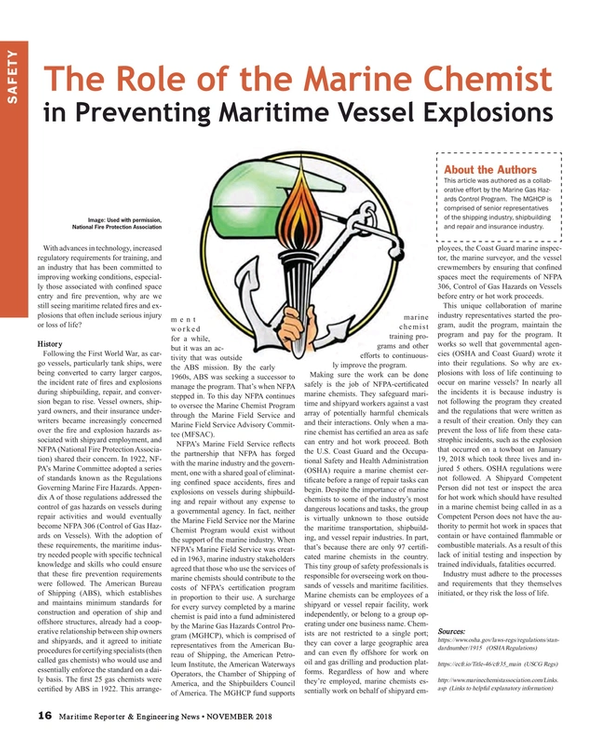