As the U.S. Coast Guard moves to rebuild its icebreaker fleet we spoke with RADM Bruce Baffer (Ret.), head of Fincantieri’s effort to win the contract to build the Polar Security Cutters.

The case for the U.S. to build a new class of icebreakers is strong. While news of global climate change and the shrinking ice caps at both poles is daily headline fodder, maritime navigation in and around the Arctic and Antarctic remains one of the most difficult and dangerous operating arenas on the high seas. There is increasing commercial ship traffic in the North, from tankers to cruise vessels, as well as a vast yet still fully undefined quantity of natural resources to potentially be discovered and recovered. But make no mistake, the driver for the U.S. to build its first heavy icebreakers in more than 40 years is a matter of political interests and defense. It is no secret that Russia holds a commanding lead operating in the region, with a fleet of icebreakers approaching 50. In the last decade, China too has increased its activities in the region. At the same time, U.S. presence in the region has dwindled .

“All you have to do is Google “Polar Star and Deep Freeze” and every year you get those answers” of why the U.S. needs to rebuild its fleet of polar icebreakers starting now, said Baffer, head of Fincantieri Marine Group’s efforts to win the Polar Security Cutter contract. Even the term ‘rebuild’ the icebreaker fleet is somewhat of a misnomer, as there’s not much to the ‘fleet’ today, as Baffer knows all too well. “My last job was to keep Polar Star running, and we spent all summer putting it back together,” following its annual trek to Antarctica to resupply McMurdo.  “When (Polar Star) is down to McMurdo, every night would be a whole new adventure in damage control, and they spend all night putting it back together. They get it done because that’s what Coasties do. But it’s just a matter of time. It’s not ‘if’ it is going to break down in the ice, it’s a matter of ‘when.’ And we don’t have a second icebreaker ready to go get it.”

A Matter of National Security

While Polar Star’s primary mission is the resupply of the McMurdo Station in Antarctica, the need for a new fleet of ice capable ships transcends this mission and is a matter of national security, according to Baffer.

“Driving the program right now is national sovereignty and competition for resources – economic resources – in the Arctic,” said Baffer. That is part of the reason the icebreaker program was re-branded as the Polar Security Cutter.

With both Russia and China increasing their presence in the region, to put it simply there is a need for ‘presence’ lest the U.S. cede its interest in a northern border, ironic at a time when political focus is keenly trained on border control.

There is economic and political interests in the Arctic’s natural resources, as well as a burgeoning eco tourism industry that is blossoming, including the world’s first icebreaking cruise ship on order for France’s Ponant. 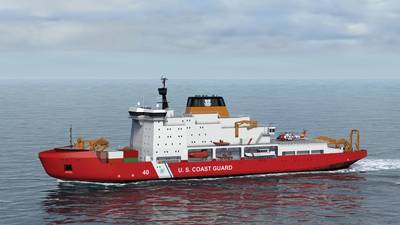 Since the U.S. last built an icebreaker more than 40 years ago, finding the right team – designer, builder, outfitters – is central to ensuring success. Baffer, who notes Fincantieri’s global reach and long history building icebreakers, does not underplay the significance of this contract and is naturally biased for his team’s approach.

“This is going to be the heavy icebreaker of the Western world; this will be the flagship, and Fincantieri has built a lot of icebreakers,” said Baffer.
There is obvious interest among the Coast Guard, ship design, ship building and ship outfitting communities to get the Polar Security Cutter project in motion, and as U.S. Coast Guard Commandant Admiral Karl Schultz notes in his interview starting on page 46, the numbers attached to the program are 6-3-1 … six ships altogether, three ‘heavy’ icebreakers and perhaps most importantly, one now given the condition of the Polar Star.

The technical proposals have been submitted, the cost proposals were being submitted at press time, and according to Baffer the Coast Guard is looking to get this awarded and started just as soon as possible.

“Certainly the schedule is aggressive and it’s driving a lot of the program decisions,” said Baffer, who added that he believes a GAO report on the project unfairly criticiaes the Coast Guard and the Navy over the schedule.

“The schedule is aggressive, but it’s something that the government has been right up front with from the beginning with industry.” The FMG team includes Vard and Aker Artic, offering a cumulative base of shipbuilding, ice breaker design and construction and government contract experience that is enviable.

Starting at the top, Baffer counts Fincantieri, a European-based multi-national company with ample icebreaker and government shipbuilding work as a primary strength of his team’s effort.

“So much of the technology around icebreakers is foreign-based right now. We haven’t built a heavy icebreaker in the U.S. since the mid-70s.”
“We designed our whole team to be responsive to that schedule need, both in production and also design,” said Baffer. “One of the things about icebreaking is there’s not that many design experts in the world that are real experts. Now we’ve got Vard and our other design partner is Aker Arctic, and between those two, that’s pretty much the (icebreaker) brain trust worldwide.”