When talk turns to marine propulsion and the host of surrounding topics – emissions, efficiency, fuel consumption – we turn to class for answers. While there are just two questions, the ensuing answers from leaders at ABS, BV, ClassNK, DNV GL, LR and RINA are voluminous & enlightening.

• Paal Johansen, DNV GL
The stricter environmental regulations and rising fuel costs lead to technology development in design, size, propulsion and operations. This goes well beyond LNG as fuel, and we believe we will see a more diversified mix, with batteries, hybrids, methanol and so on.

• James Watson, ABS
The traditional focus on class has been on certifying the safety of steel structures. Today, with the increasing emphasis on safety from the environmental perspective, the focus has shifted from structures to systems, looking at optimization of the hull form and of the equipment onboard.
Traditional physical model testing remains an essential component of hull form development, but analytical techniques, such as Computational Fluid Dynamics (CFD), have come into their own software able to handle the complex calculations required.
Arriving at the most efficient vessel requires looking at the hull and the associated appendages – propeller, rudder, energy saving devices, bulbous bow (or no bulb) – as a complete and integrated system.
This also extends inside the ship to the type of central power plant, efficiency of onboard systems and energy management, fuel choices and measures to reduce consumption, compliance with emission standards for SOX and NOx, ballast water and underwater noise.
This is increasingly facilitated through technologies utilized onboard to monitor, record and assess performance. ABS is continuing to improve its products and services to enable an expanding scope of transparent sharing of performance data between the owner and class to assist in this process.
This sharing of data is also laying the path for a shift in the near future, away from traditional prescriptive requirements towards more risk-based classification activities, such as annual surveys. This will be made possible by class and industry working closely together to share information and have a better understanding of performance of both ship structures and the associated onboard systems.

• Noboru Ueda, ClassNK
Without a doubt, the biggest change we’ve seen has been the shift towards more efficient and greener ships. As you say, this is happening both as a result of market forces such as bunker prices, as well as new regulations such as the EEDI. It’s only been a few years since the industry really started to work towards innovating more efficient vessels, but we’re already seeing very impressive improvements in terms of improved fuel efficiency and EEDI scores. At the same time, new GHG reduction technologies like air lubrication, and new low friction paints are just now entering commercial use. We’re now seeing the first fruits of efforts towards GHG reduction, and I think that we’ll see even more impressive technology, and even greater benefits in the years to come.

• Philippe Donche-Gay, BV
Size is the big thing. Chasing economies of scale by building bigger containerships has posed massive challenges for designers, yards and class. We have invested heavily in tools to understand and analyze structures for these ships. Size is an issue that will not go away and we have to stay ahead of it by working harder on structural fatigue.

• Roberto P. Cazzulo, RINA
There is a set of regulations that may affect, in a positive manner, shipowners’ earnings this year and in the future. It is about ship’s energy efficiency that is much wider than just green house gas (GHG) emissions and includes any sort of fuel savings and means to enhance energy efficiency. The IMO EEDI regulation for new ships is entering into force and will become more and more demanding. Phase 3, foreseeing a 30% reduction with respect to current EEDI baseline by 2020, will require innovative designs and technologies used on board. IACS will reiterate its  proposal to establish an IMO EEDI database for future verification of new ship performance. Class societies may record these data during the new building verification and sea trials. This matter is linked to the present booming of new so-called “ECO-ships” that are entering the market. The specification of these ECO-ships is not fully consistent and their actual performance needs to be proved during operation. It is the reason why we are closely following the development of monitoring, reporting and verification regulations for existing ships. Hopefully, the IMO will play a leading role on these issues, in the context of SEEMP regulations.

• Tim Protheroe, LR
The simple fact of uncertainty or multiple options in fuel and propulsion choices is driving change where previously, for most, there was little choice. But perspective is important – for most, change will be gradual. Efficiencies are being captured but most important is a change in attitude – within a short space of time fuel has become the big OPEX factor and, combined, with emissions regulation, the industry is changing the way it behaves. Our role is to help the industry make the best possible commercial decisions based on the technical insight and expertise we offer.

• Tim Protheroe, LR
We see an increasingly important future for LNG as a marine fuel and particularly in North America. Right now LNG is being taken up mainly by smaller ferries, by short-haul Jones Act containership operators, and OSVs. Lakes operators are likely to be next. Gas is relatively cheap and abundant in North America – we classed the first LNG carriers and with the largest share of LNG carrier classification we are well placed to offer the gas technology support and risk management that shipping needs as gas—as-fuel evolves. Today we are involved in LNG-as-fuel projects in North America and around the world. Our work with the Port of Singapore is helping set a template for the development of LNG bunkering in major ports.

• Paal Johansen, DNV GL
Considering the barriers to LNG as a fuel up until now, we believe that LNG as a fuel is an “all, or nothing at all” proposition. And we have reached the tipping point. It used to be said that LNG was a chicken or egg problem, but in the US we not only have the egg, but the chicken and the henhouse too. As we see this trend grow, DNV GL is working to ensure that owners can be confident that the technology is vetted, operational practices such as bunkering and crew training are in place, and the supporting infrastructure is meeting stringent safety standards. We are also working for the US Government and IMO to determine and remove the barriers to develop the necessary infrastructure and regulation for the supply side of LNG as a fuel. As a curiosity, the LNG fuelled ferry operating between Buenos Aires and Montevideo is the worlds´ fastest commercial ship at over 58 knots (classed by DNV GL), and I think this is a good indication also of how fast we will see a change in this field. The growing number of large LNG ready ships currently being built is also evidence of this.
We think North America and then Europe will be the first to get everything in place, soon followed by Singapore, China and Australia. So in 2020, we believe LNG is the standard for short sea shipping in North America and around the North Sea. For deep-sea shipping we believe that some routes between Asia, North America and the North Sea area will have the infrastructure in all ends to support bigger ships. With the infrastructure set to be widely available in 2025, we are already seeing a rush of investments to strengthen this trend.

• Roberto P. Cazzulo, RINA
The use of LNG as fuel is a fundamental matter that will further progress in the next years, in particular for short sea shipping and internal navigation. The NOx Tier III and SOx emission limits in designated ECAs (including North America and US Caribbean Sea) and SECAs (currently the Baltic and North Seas) will drop. Dedicated & reliable emission control technologies, such as exhaust gas recirculation, selective catalytic reduction, scrubbers are needed. Instead, LNG may be used as a viable alternative. However, a lot of issues are to be resolved, both on board, for LNK storage capacity, and ashore, in particular looking at ships’ integration with regasification plants and bunkering stations.
Such a network of bunkering stations is presently not available, except in Norway and some ports in the Baltic Sea.  The situation is rapidly evolving in the US, where large amounts of natural gas will become available. In Europe, there is an on-going study that hopefully will lead to some concrete proposals in the near future for short-sea shipping in the Mediterranean and Black Seas. We are working on it and we have technical know-how, for instance in floating regasification plants, to contribute to these developments.

• Philippe Donche-Gay, BV
We see an accelerating move to use LNG as a fuel at sea and we are working hard with shipowners and gas suppliers to facilitate that transition. We are deeply involved with new ship projects, such as the gas powered ferry, the largest to use LNG yet, to be built for Brittany Ferries, and with gas suppliers such as Gas de Suez which is developing the small scale LNG vessels which will be needed for the bunker chain.

• James Watson, ABS
Right now, we see a lot of excitement around LNG as fuel and for good reason. But while it is true to say we are past the initial tipping point, there is still a need for owners to be realistic about the decision to use LNG and the practicalities, once that decision is made.
Certainly there is a drive to adopt LNG for reasons of regulatory compliance, primarily in the current ECAs to meet upcoming limits for SOx and NOx and this will radiate out as new ECAs are adopted.
Perhaps as important to shipowners is lifecycle cost in the context of the other solutions available to address the same issues. LNG as fuel is still a big bet, but attractive compared to some other alternatives because it provides a near-single solution. It will meet ECA sulphur emission requirements and depending on type of engine solution selected, may also meet NOx emission requirements.
The decision to go ‘all-in’ on LNG must take into account the vessel design, how it is operated, where and for what length of time. There are multiple design issues associated with making LNG fuel the right solution.
In six years I would expect LNG to be available as a marine fuel in at least half a dozen US ports, because by then the ships will have been delivered that require it. Once that happens, I would expect orders for more LNG-fuelled vessels to increase rapidly.
The only factor that would disrupt this development path is a change in LNG price or a major LNG-related disaster, two circumstances that look unlikely. Not only is natural gas abundant in North America, the gas shipping industry is well aware that its almost perfect safety record in the shipping and storage of LNG in the last 50 years is something it must continue to defend. 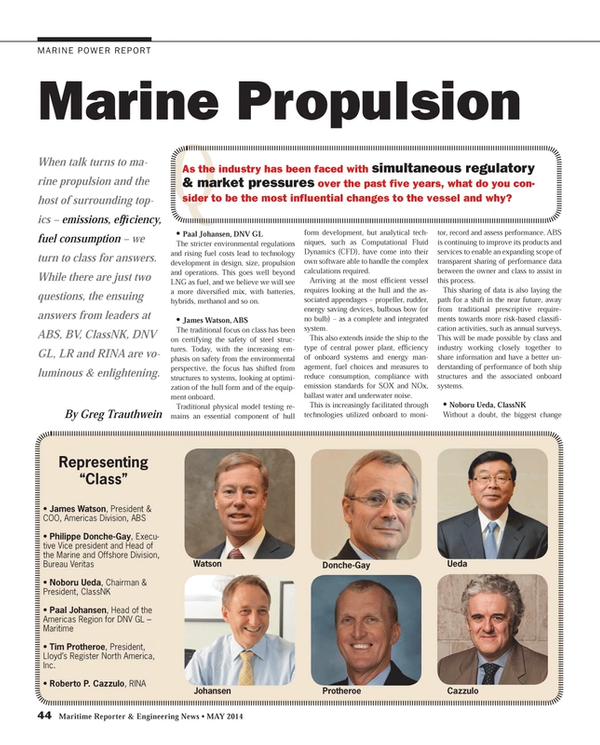 Read Classification Leaders Weigh in on Marine Propulsion in Pdf, Flash or Html5 edition of May 2014 Maritime Reporter