To Litigate, or Arbitrate? That is the Question

More than once, I have been asked to resolve a dispute in which my client was surprised to learn either that it could not force the other side into arbitration, or that arbitration was very different from its expectations.
Many companies devote hours (if not weeks and months) to negotiating what they consider to be the “substantive” terms of a contract, yet they pay little attention to the dispute resolution clause often included among boilerplate terms at the end.  This is a risky practice, for rights that are carefully bargained for may effectively be lost if the “right” dispute resolution procedure is not negotiated at the outset.
When it comes to dispute resolution clauses, there is no one-size-fits-all solution.  That which makes sense in one contract may not be appropriate for another, and the decision whether to arbitrate or litigate may be more complex than anticipated.  The temptation to “cut and paste” should be resisted.  Instead, those negotiating the agreement must fully understand the dispute resolution options available, and their implications in different contexts.  This is particularly critical with respect to mandatory arbitration, for although the rules governing courtroom procedures generally are pre-established and not subject to negotiation, arbitration is a creature of contract, and the parties are able to determine many of the procedures even before a dispute arises.  The ability to negotiate those procedures up-front can be a gold mine for the astute, and a minefield for the uninformed.
Detailed here are several threshold issues that must be explored when negotiating a dispute resolution clause, and several options that might be considered.

How important is specialized knowledge?
Perhaps the greatest potential benefit of arbitration is the ability to select the person(s) who will resolve the dispute.  This is important because judges and juries are not likely to have expertise in the maritime transportation industry, and they may have no experience operating a business.  This may not be important in some cases; but in others, technical competence will be important to understanding the evidence and resolving the dispute.  For example, shipbuilding contracts, technical management contracts, and charters often incorporate mandatory arbitration clauses precisely because judges and juries are unlikely to possess the knowledge and experience necessary to evaluate the evidence and reach the “right” conclusion—at least not without substantial briefing by counsel, and testimony by experts.  In such cases, arbitration before one or more industry experts may provide a more efficient and satisfying result.
Thus, some charters require arbitrators to be “commercial men,” which excludes attorneys.  And there are arbitration solutions specifically tailored to the maritime industry (e.g., the Society of Maritime Arbitrators, Inc.), which offer both technical expertise and a forum for resolving cross-border disputes in which neither side is perceived to have a “home court advantage.”
Although arbitration may be preferred by maritime industry operators in some contexts, this does not mean that it offers the best solution in all contexts.  Even a shipyard has business relationships (such as with catering and security firms) that could lead to disputes that would not require any particular industry expertise to resolve.

How important is confidentiality?
A compelling advantage of arbitration is the option to keep proceedings confidential.  Although there are contexts in which an arbitration decision can eventually make its way into a courtroom, generally neither the parties’ filings nor arbitration hearing are a matter of public record, and a well-crafted arbitration clause can require that the parties keep their dispute and its resolution confidential. This can provide great value to a company that prefers to avoid publicity or fears developing a reputation as a litigious actor or easy target.  Further, the ability to keep dispute resolution proceedings confidential can be critical when the dispute involves commercially sensitive matters, such as business strategy, cost and pricing models and the like.
Confidentiality is not always desirable, and there are exceptions.  For example, decisions of the Society of Maritime Arbitrators generally are published, although parties can agree to full or limited confidentiality.  This issue should be considered at the outset, and not postponed until a dispute has arisen.

How important is cost?
Minimizing legal expense is always important, but the issue merits focused attention when selecting a dispute resolution procedure.  Although arbitration often will be less expensive than litigating in court, that will not always be the case.
Arbitration costs that would not arise in a courtroom include hourly fees for the arbitrators, as well as the arbitral forum’s own case administration fee.  Depending on the number and qualifications of the arbitrators and the amount in dispute, these fees can escalate rapidly.  In contrast, judges presiding in a courtroom are not paid by the parties, and the courthouse filing fees generally pale in comparison to those assessed in arbitration.  The difference may not be a deciding factor in most cases, but it is worth considering nonetheless.
Of greater significance is the common misperception that arbitration will minimize attorney fees.  Perhaps, but perhaps not.  Often, discovery of documents and persons is narrower in arbitration because arbitrators are not constrained by codified rules of evidence and procedure.  That alone can provide substantial cost savings, which would justify a preference for arbitration.  Similarly, the motions practice that often attends courtroom litigation is frequently more limited in arbitration.  But some courts have a reputation for placing the same sort of limits on discovery and motions practice that are often employed in arbitration, and in these courtrooms litigation may be as cost-efficient as arbitration.  (The federal court in Alexandria, Virginia is known as the “Rocket Docket” for a reason).
Arbitration proceedings are creatures of contract, and the parties are able to negotiate what the process will look like.  In some cases, you may wish to negotiate the extent of available discovery rights.  For example, in a complex dispute the parties may agree to the same expansive discovery rights that would apply in court because they fear that artificial constraints would prejudice their ability to succeed on the merits.  The same is true of motions practice:  although arbitration procedures often limit (in the name of efficiency) the parties’ ability to file dispositive motions, the parties may wish to negotiate such a procedure.  Indeed, one colleague recently complained that arbitration had provided an unsatisfying result when a client was not able to file an early motion to fully dismiss a frivolous claim, as it would have in court.
The salient point is this:  arbitration may be less expensive than courtroom litigation, but that will depend on the specific arbitration procedures to which the parties might agree, contrasted against those that would be employed by the judicial alternative.  Focusing on this issue at the outset is therefore critical.

How important is a quick result?
Most federal and state court dockets are congested, and thus the ability to obtain a speedy resolution can be a significant advantage of arbitration.  In fact, some arbitration agreements require the arbitrators to resolve matters within short deadlines, and many arbitrators consciously meet that expectation.
That said, arbitrations can proceed just as slowly as courtroom litigation when the issues are particularly complex, when the parties are numerous and/or dispersed, and when the parties have agreed to court-like pretrial procedures.  Furthermore, litigation in some courts (such as the aforementioned “Rocket Docket”) may proceed more quickly than arbitration because the judges in those courts will brook no delays and grant no extensions (except in the most unusual of circumstances).
Thus, when expediency is an issue, careful attention must be paid to forum selection.

How will the dispute be resolved?
One oft-overlooked distinction between arbitration and litigation is the basis for the outcome.  In litigation the judge is constrained to rule based on the law, as set forth in statutes, regulations, procedural rules and prior judicial decisions.  But arbitrators have greater flexibility; they may consider the same statutes, regulations, rules and prior decisions, but they also have discretion to consider evidence that would be excluded in a courtroom, and to reach a decision they perceive to be fair, even if it is not fully consistent with a strict application of the law.  While this may work to your advantage in some cases, it may generate substantial uncertainty.
Are you waiving the right to an appeal?  Judges make mistakes and when they do, they are subject to appeal.  That procedural safeguard can provide critical value. In contrast, the grounds upon which an arbitrator’s decision may be appealed are more limited.
Unless you think the “basis for decision” factor weighs heavily in favor of proceeding in court, remember that arbitration avoids the risk of a “runaway jury” and it minimizes exposure to unwarranted punitive damages.

Is the dispute likely to involve an ongoing relationship?
Another frequently overlooked issue is whether a dispute is likely to involve an ongoing business relationship.  In such cases, arbitration can provide an intangible benefit because the process can be less formal and involve fewer opportunities for adverse encounters (e.g., depositions), which lends itself to being more collegial and less adversarial than courtroom litigation.  This is not always the case, of course, but when the parties are likely to continue doing business together arbitration may be more conducive to maintaining that relationship.

The questions posed here are not exhaustive, nor are the thoughts offered in response.  They should, however, demonstrate the complexity of an issue often overlooked in contract negotiation and the importance of addressing that issue head-on.

The Author
Alan M. Freeman is a partner in the Washington, D.C. office of Blank Rome LLP.  His business litigation and legal risk reduction practice is national in scope.
t: 202-772-5925
e: [email protected] 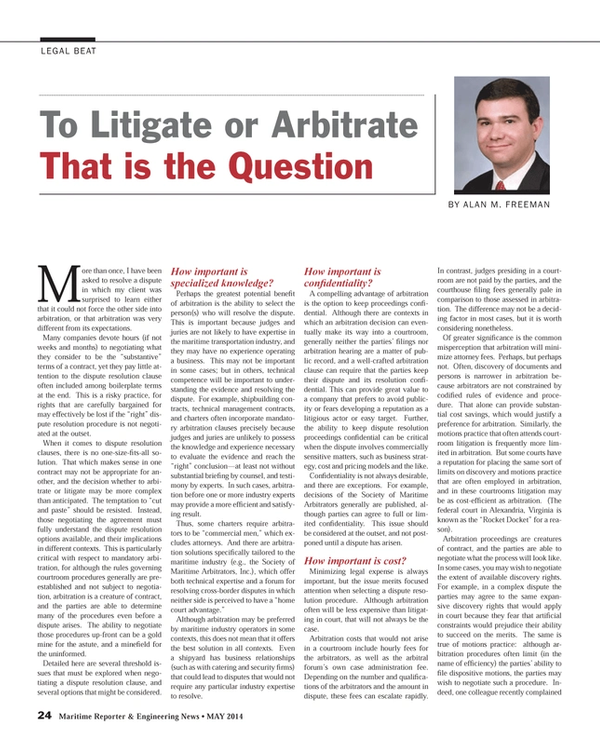 Read To Litigate, or Arbitrate? That is the Question in Pdf, Flash or Html5 edition of May 2014 Maritime Reporter