The Treatment of Foreign Seafarers

The United States effectively treats foreign seafarers more harshly than any other group that enters the country without breaking the law.

The general rule is that all persons who are not U.S. nationals or permanent residents must have a visa to enter the United States.
Persons desiring to become U.S. citizens or permanent residents must obtain an immigrant visa.  Most other persons desiring to enter the United States for a limited period of time must obtain a nonimmigrant visa.  To obtain a nonimmigrant visa, one must have a valid passport and complete the Nonimmigrant Visa Application, Form DS-160 and submit it and a photograph (head shot) to the relevant U.S. embassy or consulate.
The applicant must then schedule an interview, but the interview is generally required only for persons between the ages of 14 and 79.
An application fee of $160 must be paid prior to the interview.  In many cases, there is also a visa issuance fee.  But some nationalities may be eligible for more favorable treatment.
The Visa Waiver Program (VWP) allows citizens from participating countries to travel to the United States without a visa for stays of 90 days or less.
Such travelers must be eligible to use the VWP and have a valid Electronic System for Travel Authorization (ESTA) approval prior to travel.  The traveler’s purpose must be permitted by a Visitor (B) Visa (e.g., tourism or various business purposes).  Travel must be performed on an approved air or sea carrier and the traveler must have a round trip ticket indicating return passage to a country outside the United States that is a participant in the VWP.  Currently, there are 38 participating VWP countries. 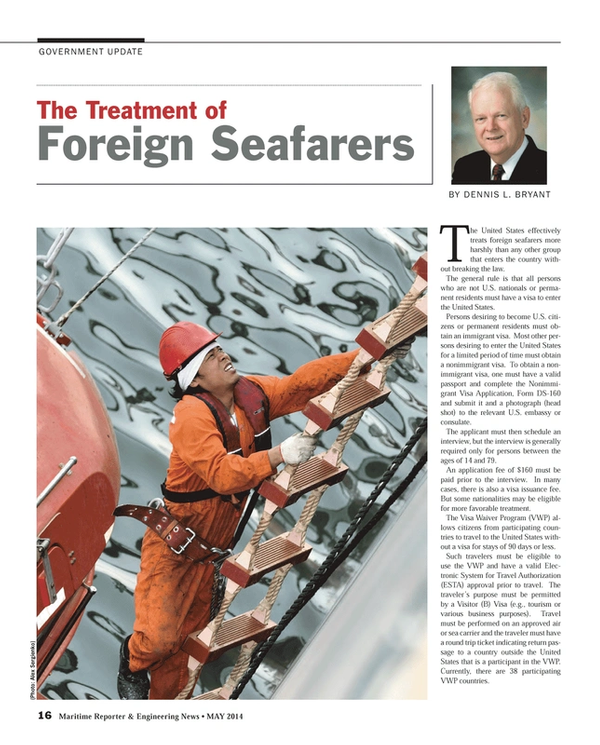 Read The Treatment of Foreign Seafarers in Pdf, Flash or Html5 edition of May 2014 Maritime Reporter