While the investigation is still fresh regarding the sinking and the tragic loss of life of the South Korean ferry Sewol, early reports point to a multitude of potential problems, including a critical breakdown among the crew. As work continues to secure the ship and recover the remaining dead onboard, Maritime Reporter & Engineering News reached out to maritime training and education experts for insights on that sector’s role in helping to reduce the risk of disaster at sea.

By now the grim details of the sinking and tremendous loss of life aboard the South Korean ferry are well-known, and the name “Sewol” will live in infamy in the maritime history books. Though all maritime mishaps with loss of life are tragic, and there have been far bigger wrecks with many more dead, this one struck a particular nerve in that of the 476 passengers and crew onboard, 339 were children and teachers on a high school outing for what was planned as a routine sailing from the Port of Incheon to the southern island of Jeju. It will be months if not years before the final chapter on Sewol is written, and perhaps the tale will never fully be told. But in the immediate aftermath, more than 300 remain missing and presumed dead and Captain Lee Joon-seok and many of his crew are in jail, there are more questions than answers. With early focus and outrage set squarely on the actions of captain and crew, we focus here on the role of the maritime training and education community in mitigating the risk of future maritime casualties.
“This case certainly looks like humans’ failed to manage their stability properly, may have decided to overload, or maybe did not secure cargo properly,” said Thomas L. Bushy, Vice President of Marine Operations, Master, T.S. Kennedy, Massachusetts Maritime Academy. “But since the investigation is in its early stages, it is too soon to place blame only on the humans.”

Human Error
In the aftermath, with a Third Mate at the helm and the reported order for passengers to stay in their cabins as the ship foundered, and with the ship’s captain among the first to make it to shore safely, it would appear that the human element was indeed a contributing factor.  “News reports mentioned the communications with shore emergency agencies - and suggested they were asking for help in the decision to abandon ship:  if true, this is unacceptable,” said Bushy. “I am saddened that the captain and crew made bad decisions, then saved themselves before doing more to help the passengers.”
“It has been proven that almost 60% of all accidents at sea are attributed to Human Error,” said Captain Jeff Cowen, who is a graduate of the California Maritime Academy with a diverse seagoing career, working today with the State of California’s Office of Spill Prevention and Response. “Fatigue has proven to be the greatest reason for human error; was the third mate rested before taking the duty of watch stander? Why wasn’t the Captain on the bridge during restricted visibility? Resting perhaps?”
“Human error seems to be the catch phrase used when no other explanation is immediately forthcoming,” said Captain Ted Morley, COO, MPT. “While it is true that it is very often the underlying cause of an accident, it is important to put it into context and determine what led to, or allowed, the human error to exist. Training, education, regulation, equipment and experience are all designed to minimize the human error factors.”
The Technology Solution
While technology in the maritime sector is arguably more capable than ever to help avoid accidents, the fact is that maritime accidents will always occur.
A current mantra in the maritime and offshore circles is “risk mitigation,” and to this end it is agreed that there is no there is no technology can ever remove all risk from an maritime operations.
“Emphasis must be placed upon looking out the window,” said Cowen. “What happens if the GPS, ECDIS or Radar goes out? Ships must still be able to navigate safely. At the bottom of U.S. charts there is a warning: Mariner should not to rely solely on any one means of navigation.”  MPT’s Morely agrees.
“ECDIS, ARPA and AIS, for example have all greatly enhanced the amount of information that a watch stander has, but they have also increased the amount of time that person spends looking at all that information. A balance between technology and first person observation is needed to ensure total situational awareness.”
“Technology and training are only two components though, as issues like crew size as compared to vessel size, ship’s schedule, and the ability of the master and crew to act effectively are all components that need to be looked at,” Morley continued. “We are seeing an increasing amount of vessels with a decreasing pool of experienced mariners sailing on ever decreasing crew sizes. Training and technology can’t always take up the slack of smaller crews.”

Industry Collaboration
While it is foolhardy to expect zero accidents in the maritime sector, many agree that emphasis on repetition in training and mixing new technology with traditional maritime skills are the ingredients to best mitigate the risk of accident.
“One of the things we stress in all of our classes here at MPT is the application of the training in real world situations. For example, we integrate our DP training with full mission simulation; this forces the student to see where that particular piece of equipment and training fits with the big picture,” said Morley. “We also try very hard to have ‘total team training’ where we see bridge officers communicating with engineering officers, again creating an atmosphere in training that helps promote utilization of resources and sharing of information. One of the best ways to avoid human error is to simply have more people informed. Communication amongst the crew, and a willingness to work as a member of the team are vital for ensuring vessel safety.”
“It is important that new mariners remember that the new technology does not replace the skills that should be inherent to every mariner,” said Captain Ted Morley, COO, MPT. “The ability of a deck officer to navigate and plot a course is not replaced by the ability of an ECDIS unit. It is also important to teach the limitations of the technology, not just the abilities of it.” But where skills and technology ends, Morley ponders if there should be more: “The Sewol is the 100th passenger vessel lost since 2002,  and there seems to be a trend to handle all of the incidents as separate and unique. This was not the case in the tanker industry where we saw sweeping legislation and design changes after the Exxon Valdez incident. I believe we need to look at the passenger and RoRo ferry industry and evaluate every component, from the design elements of the newest super ships right down to the manning, training and staffing of the crew.”
Mass Maritime’s Bushy summarized the importance of repeated training perhaps best. “What actions are practiced aboard ship to keep skill levels high to unplanned events?  Drills, drill and more drills,” said Bushy. “No ship should go to sea without knowing each person aboard knows how to recognize an emergency situation, and react to notification of one. This begins with knowing where you are aboard, how to get out, how to wear a life jacket properly, where to muster for accountability and loading of survival crafts. The officers and crew must know these skills cold, and can accomplish them in the dark with a force 8 wind howling. They must know every mistake an inexperienced crew member or passenger will make, and correct them. These skills of survival apply to all officers and crew - from the OS up to the Master. As master, I can manage drills effectively, but if I do not take it to the final phase of actually giving the order to abandon ship, then I am ill-prepared. And even when safely moored alongside my home port dock, when I give that order, it still gives me shivers.” 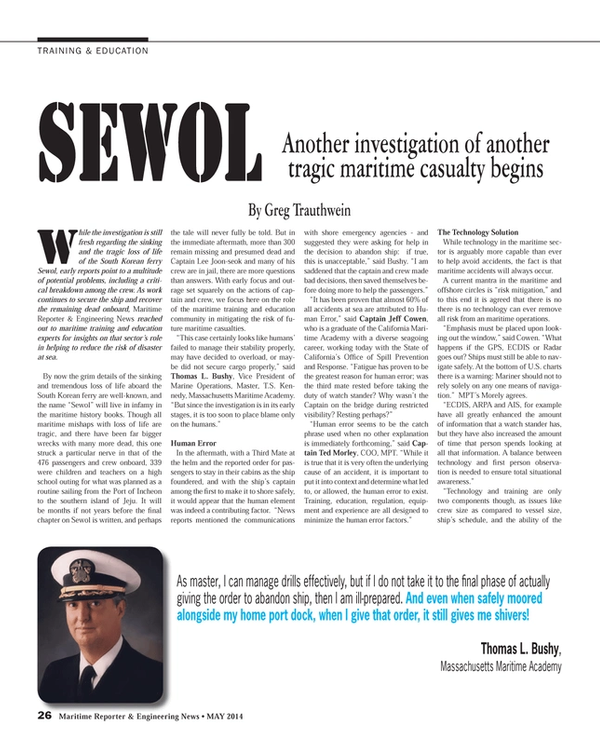