Danger Lurking: Above & Below the Surface

In late June, the U.S. Interior Department revised its interim policy for defunct, offshore oil-and-gas platforms, making it easier to turn them into artificial reefs under an initiative by the agency’s Bureau of Safety and Environmental Enforcement or BSEE. Separately, and at virtually the same time, a new NOAA report that examines national oil pollution threat from shipwrecks has been presented to the U.S. Coast Guard. The May 2013 report finds that 36 sunken vessels scattered across the U.S. coastal seafloor could pose an oil pollution threat to the nation’s coastal marine resources. Of those, 17 were recommended for further assessment and potential removal of both fuel oil and oil cargo. Based on vessel contents, condition, environmental sensitivity, and other factors, NOAA has determined that 6 vessels are high priority for a Most Probable discharge, and 36 are high priority for a Worst Case Discharge. Together, the two situations present one of the most important – and potentially lucrative – salvage opportunities in decades.

Idle Iron
“Oil operators would like to reef as much idle iron as possible because it’s cost effective for them and environmentally favorable,” said Tom Cheatum, sales and marketing manager at Versabar Inc. He adds, “The sports fishing industry has bemoaned structures being taken out of the water.” Versabar, based in Houston, Texas and Belle Chasse, La. specializes in heavy-lifting solutions. Under BSEE’s interim policy, “support structures will be moved to reef locations, and it will also be possible to reef in place,” Cheatum said. ”BSEE’s modifications may slow the reefing process down to some extent, however,” he warned.
BSEE’s new guidelines allow companies to avoid the removal process and enroll rigs in state-run, artificial reef programs. According to BSEE in June, rigs can be reefed in place or towed to a designated reefing area after hazardous materials have been removed. A recent, five-mile buffer zone between reefing areas was reduced to two miles. Storm-toppled platforms have been eliminated from reefing eligibility. The use of explosives on platforms proposed for reefing will be evaluated case-by-case, and won’t be approved if natural biological features or established artificial reefs might be harmed. The agency’s new guidelines extend decommissioning deadlines for companies converting rigs to reefs.
The interim policy incorporates suggestions from stakeholders in workshops held in New Orleans and Houston over the past year. BSEE is expanding its staff to address removals and reefing proposals, and it plans to introduce GIS or Geographic Information Systems maps of platforms in Gulf federal waters. The maps will include platform data overlays and can be used to identify candidates for reefing. Information on platforms prized by anglers and divers will be considered as reefing options are assessed.
The interim rigs-to-reefs guidelines should reverse the trend of old structures being unnecessarily removed, and will let them stay in the water for the benefit of fisheries and anglers, according to American Sportfishing Association (ASA) president and CEO Mike Nussman in late June.
In recent years, the rate of oil-and-gas platform removals in the Gulf has exceeded installations, and new platforms have been installed farther from shore, reducing anglers’ access to them, the ASA said last month.
Ten percent of 800 non-producing Gulf of Mexico platforms have been reefed since 2010 while more than 200 platforms have been removed yearly since then, according to BSEE. Three years ago, the Obama Administration tightened rules for plugging unused wells and removing old platforms and pipelines in the Gulf as part of a crackdown following the 2010 BP spill. Under September 2010 rules, wells that hadn’t been used for five years had to be abandoned or “zonally isolated” within three years. If wells were zonally isolated, operators had to abandon them in two years. Platforms that had been idle for five years or more were to be removed within five years, starting in mid-October 2010.

Decommissioning May Become More Expensive For Some Operators
BSEE’s interim policies have their benefits. “But they’ll also make it more expensive to decommission rigs because companies won’t necessarily be able to topple rigs and decommission on site the way they often did in the past,” said Andre Franques, Managing Partner of D&L Salvage & Marine Services in Franklin, La. “That will equate to more expenses on a non-producing asset,” he said. Some of the decommissioned rigs will be moved to specific reefing areas, where they’ll be spaced apart, he said.
“I expect that the Big Boys – the major oil companies including Shell, Chevron, Apache  and others, who lease offshore sites to smaller operators – will take charge of any required decommissioning on those sites themselves,” Franques said. “Since the Gulf spill, big oil companies are very concerned about liability and preventing costly accidents. They don’t want a spill to occur during decommissioning and then have their name plastered all over because of it.”
“Macondo showed these operators how expensive an environmental accident can be,” Franques said. “By taking liabilities into its own hands, a big oil company reduces its exposure and could save lots of money in the long run.” Hurricanes in the Gulf have pushed operators to speed up decommissioning to eliminate the possibility of being hit by a storm. “An operator is better off abandoning a platform before a hurricane knocks it over and causes an underwater spill,” he said. “A spill can be expensive, and since Katrina, insurance companies have put a payment cap on that kind of coverage.”
“Decommissioning rigs may be easier for companies in state water than in federal waters,” Franques said. “The federal decommissioning bureaucracy has become much more complicated and confusing in recent years because regulations were tightened after the 2010 Macondo spill. Federal rules and regulations are a moving target that keeps changing, making offshore oil and gas operators very cautious about how they invest. Today, they might be more willing to invest in less-regulated state waters.” In the last 15 years, D&L has salvaged abandoned state-water pipelines, oil platform steel and other metals from old pipelines and equipment, and collected them for its scrap division.

BSEE’s Revisions Could Give States More Flexibility
Sixteen states have rigs-to-reefs programs now. Louisiana reefs about 25 structures a year through its Artificial Reef Development Fund or ARDF.  The state’s oil-and-gas operators pay into the fund, expecting the money to be used on reef building and fisheries enhancement.
For oil companies operating in Louisiana, the average cost of decommissioning a Gulf platform outside of the ARDF program is about $3.8 million, Randy Pausina, Assistant Secretary of the Louisiana Dept. of Wildlife and Fisheries, said last month. Companies enrolling structures in the ARDF donate half of their realized savings to the fund. It takes six months to a year before old platforms are deployed as reef. LDWF pays any costs associated with maintaining artificial reefs.
BSEE’s initiatives in June were a revision in internal policy, not a change in regulations, “but they seem to be in a positive direction, allowing for more flexibility at the state level,” Pausina said. Louisiana’s ARDF, popular with oil companies, contains about $22 million now after the Jindal Administration removed tens of millions of dollars from the fund in recent years to balance the state budget. The states say the fund has enough money to meet reefing needs, however.

Feds Weigh Impact of Old Shipwrecks
In the salvage arena, the federal government completed a major study on old shipwrecks this spring. No significant salvage work on these so-called legacy shipwrecks is expected this year, however. In its report “Risk Assessment for Potentially Polluting Wrecks in U.S. Waters,” released in March, the National Oceanic and Atmospheric Administration assessed pollution threats from wrecks. Congress appropriated $1 million in 2010 to identify them, and NOAA worked with the U.S. Coast Guard on that mandate.
NOAA’s Resources and Undersea Threats, or RUST, database includes 20,000 shipwrecks in U.S. waters. Most of these ships lost their cargoes long ago but some of them contain hundreds or thousands of barrels of oil. 87still have enough structural integrity to contain oil, and six are rated as high priority by NOAA for probable fuel discharges. The feds are monitoring World War II ship casualties in the Battle of the Atlantic. Great Lakes casualties were largely coal fired, however, and aren’t much of a modern-day threat.
Shipwrecks that pollute are much more manageable than initially feared, NOAA concluded in its recent study. U.S. coastlines are not necessarily littered with vessels that are ticking time bombs of oil, the agency said. Upcoming U.S. Navy regulations should clarify how the nation’s Sunken Military Craft Act will interact with Oil Pollution Act requirements, NOAA also said. For the majority of vessels identified in the Remediation of Underwater Legacy Environmental Threats or RULET, removal isn’t feasible because of cost, complexity and historical significance, NOAA said in its report.
“To my knowledge, no legacy wrecks have been salvaged or had pollution removals conducted on them this year,” Lisa Symons, NOAA damage assessment coordinator, said last month. “The USCG is in the process of reviewing the RULET, and incorporating risk assessments into appropriate area contingency plans. I don’t know of any scheduled assessment or removal activities at this time but a couple of surveys of opportunity have taken place.”

Seeking New Technologies – and New Opportunities
At Versabar, Tom Cheatum said his firm doesn’t do shipwreck salvage. As for the decommissioning industry, “there isn’t much new on the operational side of idle iron,” he said. “But the industry continues to look for new technologies to make decommissioning more efficient and less expensive.” Launched in 2010, Versabar’s VB 10,000 lift vessel--used for topside rig decommissioning, jacket removal and underwater debris removal--can raise 4,000 tons in a single operation. That ability can save a company time in a rig removal. In 2011, Versabar introduced “The Claw,” a lifting device used with the VB 10,000 to reduce diving exposure.
“Companies stay competitive by adopting emerging technologies,” Cheatum said. “We have technology stuff we’re working on but we aren’t ready to talk about it yet.” They can also look for new types of work. As for the NOAA report, as many as 20,000 wrecks do litter the ocean bottom, according to their database. No doubt, some will need remediation. Salvors with idle equipment, awaiting the proverbial “big one,” may instead find opportunities in legacy wrecks and rigs. In both cases, these jobs are no less important than the next disaster which may or may not lurk just around the next corner. Until then, there’s work to do. 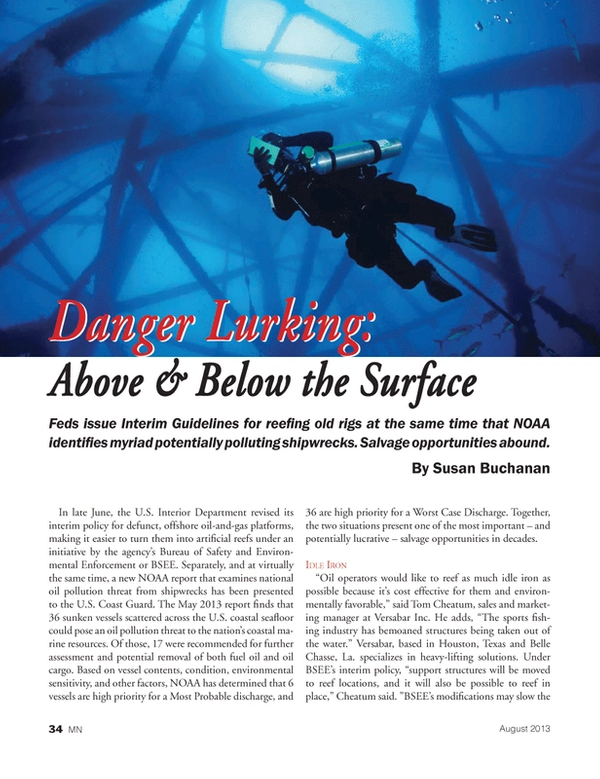 Read Danger Lurking: Above & Below the Surface in Pdf, Flash or Html5 edition of August 2013 Marine News