Vessel’s crane is the centerpiece of this state-of-the-art, technologically advanced workhorse platform.

Sterling Equipment, Inc., an East Coast marine construction rental company based out of Quincy, Mass., has more than 135 pieces of floating equipment in commission, but its newest barge, a 180- x 65- x 12-foot crane dredge, will be among its largest and most technologically advanced. In September 2012, Sterling, a subsidiary of Jay Cashman, Inc., contracted May Shipyard on Staten Island, N.Y. to start construction on its new walking spud deck barge, Dale Pyatt (named after President and CEO of Jay Cashman, Inc.).
Robert “Bobby D” DeCrescenzo, president of Sterling, said the 70-cubic-yard dredge is being built to help Sterling enter a bigger market. “To compete with dredging market, we have to come up in dredge size,” DeCrescenzo said. “We’re not a 20-yard dredge company anymore. We’re a 70-cubic-yard dredge company, and we can compete with the big guys.”

Two Steps Forward; One Back
The new dredger is Sterling’s third barge to be built at May in the last year and a half, and though its construction has finally been completed, the shipbuilding crew encountered a few setbacks along the way. Last October, Superstorm Sandy brought more than six feet of water into the yard, knocking one of May’s drydocks into the ship, causing damage to the vessel. The yard was closed for at least 30 days, DeCrescenzo said, and without power, the project was kept stagnant for nearly six weeks. With help from 250-kw generators, May’s builders were able to get production back on track.

TDC Crane: Power and Features to Spare
Significantly, the crane is powered by two Caterpillar C27 tier 4 diesel generators that produce 800 eKW each, synchronized for 1,600 eKW of total power. DeCrescenzo said the vessel will feature state-of the art electronics and boasts an all-electric design, right down to the operation of the crane. With all hold-ups in rearview, Sterling has wrapped up assembly on the barge’s crane in Quincy. The crane, designed to T6 criteria by Canadian company TDC Cranes Ltd., has finally made its way onto the barge.
When engineering on the crane began in June 2012, Sterling set forth to produce a crane that was enormous, powerful and high-tech, yet still durable and simple to operate. Sterling provided continual input to TDC throughout the engineering and design process to end up with a machine that suits the end user and application. “Everything about this crane is massive, said Richard Gillespie, President of TDC Cranes Ltd., “from the draw works to the boom to the dual slew drives, carbody, a-frame, house roller beams, gear reducers, open gears and operating cab.”
“Assembly of a machine this size is a huge undertaking requiring skilled fitters, welders, millwrights and electricians,” Gillespie said. “This was undertaken by Sterling’s crew in Quincy with TDC supervision and support. Large steel fabrications were built off site, delivered to Sterling and had all the mechanical and electrical components installed by Sterling at the Quincy yard.”
The dredge crane features 200,000 pounds of line pull, 250 feet-per-minute rating, diesel-electric drives and 75-foot operating radius. It can be equipped with either a 70-yard bucket for trimming or a 30-yard bucket for heavy digging. With a crane of this size, simple operation seems hard to imagine. But, that’s where many of its high-tech features come into play. The entire crane can be operated from one seat with two joysticks. There are no pedals, no frictions, and the winches are fully powered up and down. Even the spud winches and walking spud can be controlled from the crane seat.
The list of state-of-the-art features doesn’t end there. The crane’s winch lock allows the operator to automatically coordinate the winches, auto-close, auto-open and cinch control. As the closed bucket hauls up, the closing winch adjusts itself 60 times per second to ensure the bucket remains closed even when the winch is inactive.
The house rollers, carbody and rail are unique to TDC. The roll path is a continuous, curved beam with heavy flanges and web that provide uniform, continuous support for the rail, facilitating direct transfer of loads to the structure of the barge without bending in the carbody. The rail itself is rolled in a precise curve with the ends cut on 45 degree bias to guide the house rollers transition across the rail joints.

Moving to the Head of Class
Built entirely in the United States with North American components, the newbuild work platform is ample proof that U.S. builders can get the job done and that much needed dredging capacity continues to be launched. “The result,” Gillespie said, “is a strong roll path capable of withstanding the rigors of dredging. Environmentally, the crane is state-of-the-art; it uses Tier 4 engines, double walled fuel tanks and elimination of all hydraulic equipment,” Gillespie said. “This dredge is lightyears ahead of the competition environmentally and is the only dredge in North America that is Tier 4 compliant throughout.”
Ahead of the curve environmentally and technologically, Sterling, Canadian-based TDC Cranes Ltd. and May Shipyard have beaten the odds presented by both Mother Nature and the regulatory scheme to produce a competitive and highly desirable dredge unit. 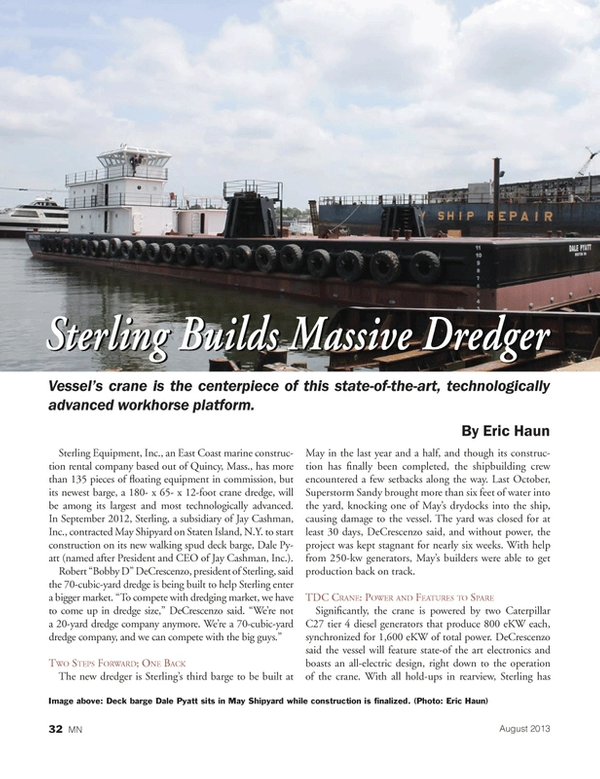