It has been over three years since the tragic accident occurred aboard the Deepwater Horizon on April 20, 2010.  The industry and the relevant federal agencies have done much to put in place improved safeguards to prevent such an accident – which left 11 dead and 17 injured – from happening again.  Congress, on the other hand, has done little to intervene to force new requirements on either the federal government or industry. Meanwhile, energy-related work in the Gulf of Mexico is rapidly increasing and forecasts are that it will remain busy for the next few years. The following is a summary and assessment of recent initiatives being implemented by industry and the government.

Previous Initiatives
Following the Deepwater Horizon incident, the forerunner agency to the Bureau of Safety and Environmental Enforcement (BSEE), published an Interim Final Rule (IFR) titled “Increased Safety Measures for Energy Development on the Outer Continental Shelf” on October 14, 2010.  BSEE published Notice to Lessees (NTL) No. 2012-N-06 titled “Guidance to Owners and Operators of Offshore Facilities Seaward of the Coast Line Concerning Regional OSRPs” on August 10, 2012. The NTL is intended to provide clarification, guidance, and information concerning the preparation and submittal of a regional OSRP for owners and operators of oil handling, storage, or transportation facilities, including pipelines, located seaward of the coast line.
In addition, on October 15, 2010, BSEE published its Workplace Safety Rule on Safety and Environmental Management Systems, commonly referred to as the SEMS rule. The purpose of this rule was to establish a comprehensive management program for identifying, addressing, and managing operational safety hazards and impacts. This rule became effective on November 15, 2011 and audits have to be completed by November 15, 2013.
BSEE published Interim Policy Document (IPD) No. 12-07 titled “Incidents of Non-Compliance (INC) to Contractors” on August 15, 2012. IPD 12-07 formally sets forth BSEE’s intention to issue INCs to contractors for serious violations of BSEE regulations. Finally, BSEE published its Final Rule titled “Increased Safety Measures for Energy Development on the OCS” on August 22, 2012. The Final Rule becomes effective on October 22, 2012. In short, it amends drilling, well completion, well workover, and decommissioning regulations related to well control.

2013 Initiatives
BSEE and the Coast Guard have continued this trend in 2013 as new requirements are coming fast and furious.  Specifically, on April 5, 2013 BSEE published its revised regulations for Safety and Environmental Management Systems (“SEMS II”). Among other things, SEMS II requires operators to (1) create procedures giving all personnel stop work authority, (2) establish who has the ultimate work authority on the facility for operational safety and decision-making, (3) promote the participation by employees and management in the mitigation or elimination of hazards, and (4) empower all personnel to report safety or environmental violations.  In addition, it requires third party audits and new requirements for Job Safety Analysis prior to commencing work.  Operators must comply with these new requirements by June 4, 2014.
In addition, on April 30, 2015 a new Memorandum of Understanding (MOU) between BSEE and the Coast Guard went into effect for the purpose of closely coordinating responsibilities for regulation and enforcement on the outer continental shelf and for the establishment of future focused agreements.  Furthermore, on May 10, 2013 BSEE formally announced its Final Statement of Policy on Safety Culture. Specifically, under this policy, BSEE defined nine characteristics that are indicative of a robust safety culture. The purpose of the policy statement is to assist the offshore oil and gas industry to go beyond a checklist-inspection approach and to move toward a systemic, comprehensive approach to compliance.

Assessment of Progress
Two reports were recently published analyzing the progress of industry, the government, and Congress to improve safety offshore since the Deepwater Horizon incident. The Democratic staff of the House Natural Resources Committee analyzed data comparing pre-Deepwater Horizon and post-Deepwater Horizon accidents, inspections, violations and civil penalties to analyze improvements. The staff issued their findings on May 10, 2013 in: Dangerous Drillers: Offshore Safety Lapses Continue Three Years After BP Spill (“House Report”) (http://democrats.naturalresources.house.gov/sites/democrats.naturalresources.house.gov/files/documents/2013-05-10_BP_Spill_DangerousDrillers.pdf ).
Among other things, the data demonstrated marked improvement in the number of injuries from offshore accidents, down 50% over the past two years. There has also been a reduction in the number of loss-of-well control since the Department of the Interior (“DOI”) adopted new safety regulations and has been issuing more violations.
Unfortunately, according to the House Report, companies continue to have safety lapses. It was determined that the companies who suffered serious safety lapses pre-Deepwater Horizon continue to be the top violators. The data shows that the threat of civil penalties has not deterred companies from engaging in risky practices. The House Report noted that part of the problem is that Congress still has not acted on recommendations to strengthen regulatory enforcement and raise penalties for violations of drilling safety standards. The House Report concluded, however, that despite the lack of legislation many of the DOI initiatives mentioned above appear to be having some positive effects. The House Report made the following three key recommendations:

Analysis
Three years has lapsed since the Deepwater Horizon occurred and our day-to-day lives have turned to other more pressing things. We can only trust that we have learned solid lessons that we will not forget. Indeed, as discussed above, there have been noticeable improvements in offshore safety.  These improvements are noteworthy, but the government and industry cannot rest on its laurels as there is still much room for improvement. And, due to the continuing change in political priorities faced by Congress, it is now unlikely that it will pass sweeping spill-related legislation. Thus, eternal vigilance and further improvements in safety must continue to be priorities for the government and industry to ensure another Deepwater Horizon type incident does not occur again. 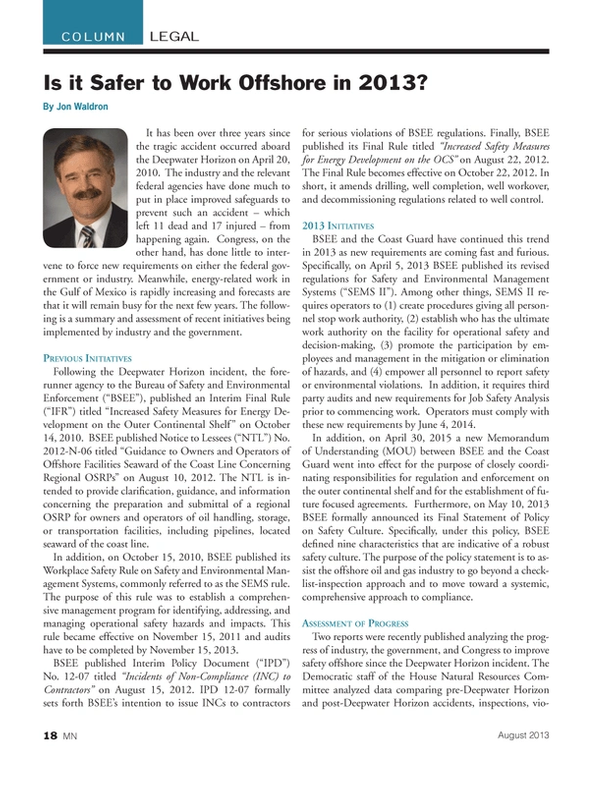 Read Is it Safer to Work Offshore in 2013? in Pdf, Flash or Html5 edition of August 2013 Marine News