Engine Maintenance trumps a tough economy. Bypass oil filtration technology is one way to get there.

For the past several years, ferry service and tugboat operators have had one eye on fuel costs and the other on the economy. But worry as they might, there’s not much, if anything, that operators can do to effect change to the economy or to reduce the price of fuel. What they can do, however, is effect change to reduce their company’s operating costs and that’s where proper engine maintenance can make a significant difference.
Oil is used to lubricate, cool and seal the engine, and maintaining its purity is crucial. If not kept continuously and meticulously clean, engine oil loses its key attributes, including vital additives, due to contamination from byproducts of combustion, wear metals, liquids, gases, and oxidation. A buildup of particle contamination could cause restriction of oil flow, contributing to increase wear through reduced lubrication, which increases friction within the engine. This in turn can lead to added costs associated with unexpected engine maintenance or replacement.

Defining the Problem
Normal heat and pressure generated by an internal combustion engine combine with fuel sulfur and oxygen to form sulfuric dioxide (SO2) and sulfur trioxide (SO3).  Sulfuric acid is created when these sulfur compounds react with water contaminant, triggering various forms of oil degradation such as polymerization, increasing engine oil viscosity and decreasing its ability to shear and flow smoothly.
Other key factors in engine wear include friction, heavy load and vibration, thermo-expansion, corrosion, fuel combustion chemical reaction, and intra-metal electrical currents. These primary sources cause heat, material deformation, component wear, oxidization of metal, non-metals, and degradation of oil, coolant, and seals. Together these add up to reduced reliability and life of engine-control and emissions components.
In years past, replacing the oil at manufacturer-recommended intervals was seen as a pre-emptive measure to protect the engine from internal wear and tear. Known as planned or scheduled maintenance, it’s still routinely followed today. But even routine replacement of engine components and engine overhauls does not help to reduce overall pollutants generated by the engine.

Specific Maintenance Programs
Progressive maintenance programs – Condition-Based Maintenance (CBM) and World Class Maintenance (WCM) – are both great systems to combat engine wear. These programs emphasize asset optimization by eliminating the root cause of potential failures via careful monitoring. In essence, both allow us to predict how an engine will perform and what we can do to prevent potential problems.  Bypass oil filtration technology and oil analysis are critical tools used in CBM and WCM.
One of the facts about engine maintenance is that oil must be replaced at regular intervals as it becomes contaminated and ‘dirty’. But if oil can be kept clean it can continue to be used and the most effective way oil can be cleaned continuously is through the technology of bypass oil filtration.
Basically, bypass oil filtration works like a dialysis machine for oil, allowing lubricating oil to be slowly siphoned out of the engine, cleaned of solid, liquid, and gaseous contaminant, and receive the appropriate amount of base additives time-released back into the oil, maintaining oil viscosity and balance, then returning the cleaned, refreshed oil back to the engine.
By diverting a small amount of lube oil out of the engine, cleaning it of impurities and returning it back to the engine; the result is an engine running on continuously clean oil and a safe extension of the oil life. By doing this, lubricating oil remains continuously clean and is able to continue to perform the job for which it was intended – to maintain thermal stability, lubricate to keep engine parts from grinding together, carry away harmful debris, and seal the engine.

How it Works
At standard maintenance-scheduled oil drain intervals, an oil sample is taken and the disposable replacement filter element (of the bypass system) is replaced. Both actions are non-disruptive and can be performed while the engine is running, taking only a matter of minutes.  Oil analysis monitors the condition of the oil for a number of factors including viscosity, wear metals, additives, contamination, and physical properties.
Captain Bill Clark, who runs the South Ferry service, operates four ships that carry passengers across the waterways off New York’s Long Island. Captain Clark estimates that lengthening of the oil-drain intervals – to 2,000 hours from 250 hours prior to using bypass filtration – saves him roughly 400 gallons of oil, equal to about $5,000, for each ship. Beyond this, Clark credits the filtration system in part for the incredible longevity of his engines. Clark’s last two engines went 67,000 and 73,000 hours, respectively, before requiring an overhaul. “[Oil bypass filtration] can definitely take some credit for the long life of those engines,” Clark notes, adding that oil analysis helps him to determine if and when an oil change is needed.
Ernie Villers, Port Engineer and Head of Maintenance for Fire Island Ferries, said he first learned about the benefits of bypass oil filtration system from Captain Clark, and uses it on two of his 14 boats. The system, Villers said, allows his 650 horsepower engines to run at least three times longer before requiring an oil change, and he plans to outfit the rest of his boats with a bypass filtration system. Like Clark, he tests the oil periodically to see when the oil needs to be changed.

Intangible Benefits
Most ferry and tug operator clients are surprised to learn that savings from having to purchase less oil is just the icing on the cake. Once a successful bypass filtration program is implemented, most companies find that indirect savings from the program, such as downtime, reduced component repairs and extension of life to overhaul, significantly outperform the direct savings from the safe extension of oil life.
Additionally, there is a benefit in using bypass oil filtration technology with regard to larger applications in the marine industry.  The cost of transporting and storing oil for maintenance is greatly reduced when the operator is able to reduce the amount of oil they have to carry with them when out to sea, as is the environmental risk associated with bringing oil on and off a vessel.
In purchasing an oil bypass filtration system, it’s important to select a system that addresses all three main reasons the oil has to be changed to begin with: 1) removal of solid contaminant to below one micron (studies show that solid contaminants above the one micron level cause serious deterioration on engine parts); 2) removal of liquid and gaseous contaminants; and, 3) replenishment of base additives (in engine oil) to maintain the oil’s chemical balance. 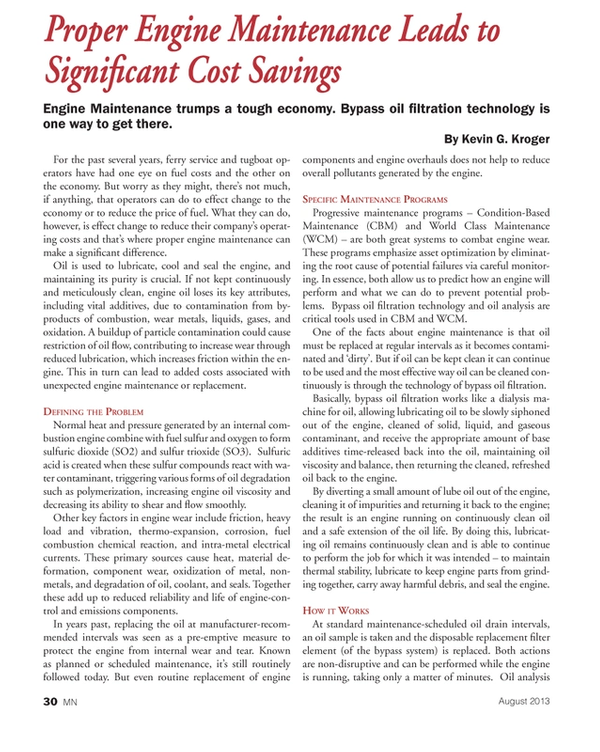