Today’s economy is tough enough for the commercial sector. For federal, state and municipal authorities – and in an atmosphere of shrinking tax revenues and sequestration – the task of securing mission-appropriate assets can be even tougher. At this year’s National Sheriff’s Association Conference (of all places), held this June in Charlotte, N.C, at least two boatbuilders showed that there is an economical way to get the job done.

Rescue ONE: the recipe for interoperability and mutual cooperation
Increasingly, the need for multi-missioned boats to create both economy of scale and the ability to do more with fewer assets is becoming the rule, rather than the exception. Those tasked with providing specific missions, such as search and rescue, have similar needs. In 1992, a U.S. company called Rescue ONE Connector Boats introduced not only a mission specific search and rescue boat, but a boat system that would allow individual boats to be connected together to form larger vessels and/or platforms that expand the capabilities of singular boats to achieve larger scale missions.  For municipalities with limited funds, the concept has real meaning – and utility.
The all-welded, aluminum-constructed Rescue ONE Connector Boat is anchored in its patented QuickFIT railing system that enables multiple boats to be connected side by side or end to end. Two boats can be connected together in less than 20 seconds and can then be disconnected in less than 5 seconds. This flexible connected system allows various missions to be accomplished that are simply not possible using single boats. Neighboring communities, each with their own single boat, can now promote real interoperability on the water.

The Connector Boat in its singular form is built specifically for public safety missions.  With its wide, flat bottom and rectangular shape, the stability of the boat is unmatched. This stability translates to safety for water rescue technicians. Safety is also achieved by the more than 538,000 cubic meters of flotation material contained in the boat. Virtually unsinkable, the boat includes removable SeaTool boxes that act as bench seating and storage compartments. When removed, the flat non-skid flooring area becomes open work space. The SeaTool bench seats also float if necessary to put overboard.
A unique accessory that makes the Connector Boat a must have is the dive rescue platform.  Stowed in the bow and is deployed to create a shelf below the surface of the water, this platform then allows rescue technicians to assist victims in the water rather than reaching over the side of the boat and also creates a ladder for boarding the boat for both victim and rescuer.
Exiting a boat has never been an issue for divers. Returning themselves and their gear safely inside the boat has been the constant challenge.  With the Connector Boat fitted dive rescue platform, the divers can now swim up to the platform and sit down.  Once recovered from a strenuous mission, the diver can stand up, securely hand their equipment to a tender inside the boat, and then take two steps to safely and easily board the boat.  Constructed of welded aluminum also, the platform is easily deployed and retrieved by a single person.
Versatility is another aspect of the Connector Boat system that makes it a true value.  Many times, agencies must purchase different types of boats to accomplish specific missions.  While that still must occur in special circumstances, having one boat that can accomplish multiple missions is ideal.  Yet another capability of the Connector Boat system is the ability to quickly and easily convert your boat system to a fireboat.  With the removal of a seat in the Connector Boat, the boat can be fitted with a fire pump.  A specially design 500 gallon per minute fire pump fits into the void of the front bench seat to provide immediate firefighting or water source capability.  In its custom fitted frame, the Connector Boat fire pump houses a 20hp pump, fuel tank, battery, 8’ flex hose suction, barrel strainer and fixed monitor with nozzle making it a self-contained unit capable of being dropped in at a moment’s notice.  Not only does the pump act as a quick attack apparatus for on water firefighting, its 2.5” utility discharge can be used to pump water to a land based tender when other sources of water are not available.  Dewatering of flooded vessels can also be achieved with the on board pump system.
The Connector Boats unique design allows it to navigate extremely shallow water.  With a draft of mere inches, the boats are able to take rescuers to location such as flooded urban streets that traditional boats just cannot go.  And with its durable aluminum construction, it is made for the demands of work in debris filled flood rescue and evacuation missions.  Connector boats can even be outfitted with outboard jet drives which can propel the boat in less than 10 inches of water. While its singular form is a tremendous asset, the system really proves itself by linking boats together for various purposes:

To this end, over 600 agencies worldwide, including the Federal Bureau of Investigation, have invested in the boat system that has changed how they conduct water operations. But, perhaps, it is the smaller, less financially endowed organizations that constitute Rescue ONE’s most important customers. Neighboring communities only able to purchase one boat get the full benefit of the system when they join forces on a particular incident or response by pooling resources. That’s economy of scale and utility. That’s Rescue ONE.

Freedom 21 from Silver Ships: the affordable Law Enforcement Platform
For municipal police departments thirsting for a quality maritime platform even in the leanest of times, Silver Ships has just the tonic for what ails them. That’s because, for about $128,000, they can obtain a first rate, capable patrol vessel that not only puts them in the water, it does so with superior performance, too. That low entry price comes complete with a full trailer package and with a vessel that is capable of making speeds of up to 40 KT, using an Evinrude 250 engine, with a relatively shallow 18” draft that will also take them to just about any place where there is even the smallest amount of water. A host of optional upgrades completes the package for those municipalities with a bit more to spend. At the Sheriff’s Convention in Charlotte, they even took their first order.
Silver Ships has provided, on a global basis, military, municipal and commercial users with work and patrol vessels for more than 27 years. On any given day in the factory, you’ll find Law Enforcement boats side by side to US Navy program boats with a variety of state, Federal & DOD as well as foreign market mixed in. Their latest rendition, the “Freedom 21CC,” built with marine-grade aluminum has the ability to work in shallow or open water, powered by single outboard and open deck area the 21CC was Purpose Built and ergonomically designed for single officer operations.
The 21CC has a solid foam fendering system with side entry ports, plenty of dry storage as well as dedicated firearms locker.  The console is laid out to accept any type of navigational system commonly used as well as department specific electronics.  The boat is designed to be safe, reliable, efficient and most of all - intuitive for the officer to operate. 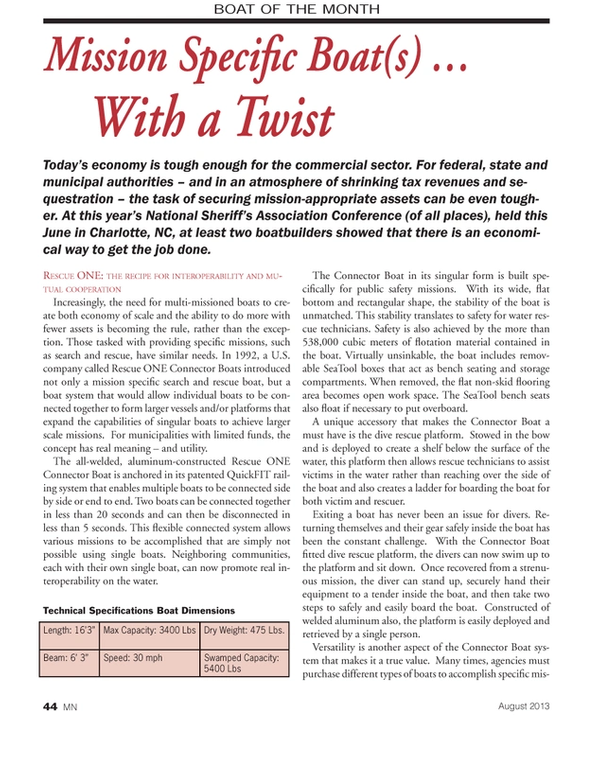