With hundreds of marine workboats and crane sites active across the world, companies are looking for ways to remain competitive, while maintaining high standards of safety and increasing the bottom line. Leveraging the latest technology in situational awareness platforms is one way these companies can remain competitive while maintaining quality.  Increased situational awareness can be accomplished with a combination of strategically placed and properly installed sensors or cameras systems around the work site. Christopher Machut, the Chief Technology Officer of GM Engineering Services, LLC (GMES) explains why his TugCam system (www.gmesllc.com) fulfills all of these requirements, and more.

What is Situational Awareness?
Workboat captains and crane operators often take the lead in maintaining the tempo of the job site operations. The ability to make immediate and accurate decisions has a direct impact upon the entire job site. Providing the captain or operator with enough information to help relocate equipment, move materials and support the crew is critical to smooth operations. One way of increasing the ability to make better and more informed decisions is to improve the captain’s or operator’s awareness in the work environment.
In today’s market, the competitive advantage at the job site can be gained by leveraging the latest in situational awareness platforms. Often a term reserved solely for the military, situational awareness “is the perception of environmental elements with respect to time and/or space”1. To further elaborate, the ability to see what is around the decision maker enables him to make better informed decisions. When personnel are properly trained and equipment is properly installed, situational awareness platforms can increase the decision making capabilities of both management and the equipment operators resulting in more efficient and safer operations.
Effective situational awareness platforms start with the basics by providing the operators with enough information to enable them to make better decisions without being a distraction. Simply put, a display mounted in the crane operators cab can show a live video feed from a wireless camera placed on the hook block during a blind lift. Another option is to mount cameras around the vessel to allow the captain to see in front of him during a blind push. The combination of strategically placed wireless cameras and video display mounted in the operator’s cab is an example of a situational awareness platform.

Save Time
Blind lifts for crane operators and blind pushes for tugboat captains are some of the most dangerous and nerve racking maneuvers. Traditional blind lifts and pushes are often very slow and require time consuming moves. Having to rely solely on the eyes of the rigger or spotter to relay information to the operator with radio communication can cause a great deal of stress to the operator. This is especially true if the operator and the spotter have not worked together in the past or have not built a good rapport with one another. They must have the ability to work together as a team and rely on each other’s judgment.
A wireless camera that is easy to deploy, rechargeable and provides a battery life long enough for an entire shift can significantly increase the efficiency of the crew. When using a camera mounted on or near the hook block of a crane, it is been found that the crane operator can be up to 40% more efficient in a blind lift than without a camera. This significant increase is due to the crane operator’s situational awareness being increased to enable him to make better and more informed decisions regarding the load. In cooperation with a rigger, the crane operator is increasing his situational awareness enabling him to make better and more informed decisions resulting in more efficient operations.

Save Money
Situational awareness platforms positioned directly at the job site benefit the entire operation. When the captain or crane operator is given increased visual ability there is the implied benefit of less accidents. The result of less accidents can reduce costly claims and loss of personnel. In addition, the crane operator being more efficient, enables the entire job site to gain in efficiency as well. This increase in efficiency results in increased productivity by having to work less to accomplish the same goal.
Placing wireless cameras on the boom of the crane, in front of a blind push or near the load to be relocated, can significantly increase the ability of the captain and the crane operator to effectively understand what is happening in and around the job site. By providing a video feed, to the crane operator, for hard to see areas he is effectively placing his “eyes” exactly on the load or equipment that he is responsible for. If the crew is able to work faster, without compromising safety, the benefit can be seen directly in reducing direct and indirect operational costs.

Reduce and Better Understand Accidents
It goes, without saying, that the most important job function of any marine pilot or foreman is the safety of his crew. Providing the crane operator with the proper situational awareness platform can be instrumental to the safety of the crew that operates around him. A wireless camera system can allow the captain and crane operator to decide when and where they need the additional line of sight. In addition, this video can be sent wirelessly over the internet for management to monitor the job site and even recorded to a DVR (digital video recorder). This recorded video could be used for analysis of the efficiency of the job site or to conduct post-accident analysis in the unfortunate event of an accident.The ability to relocate the captain or crane operator’s “eyes” to anywhere on the job site improves the confidence of the crew resulting in better decisions being made by the team as a whole. A confident team lead is critical in preventing accidents and instilling similar confidence in the crew that work below him. Therefore, the benefits of a situational awareness platform can be immediately tangible and substantial for the entire crew’s safety and well-being.

Additional Considerations
There are some unintended benefits of the use of cameras at a job site to improve situational awareness. If used to increase the situational awareness of the crane operator, the crew may interpret this as management watching them. An unintended benefit of this perception by the crew is an increase in productivity whether or not management is actually viewing the camera feed.
This productivity increase can be associated with what is called the Hawthorne Effect. The basic premise of the Hawthorne effect is “researchers concluded that the workers worked harder because they thought that they were being monitored individually.”
As a counter to the positive psychological benefits of cameras at a job site, there can be a negative consequence as well. Some crew may interpret cameras as an invasion of their privacy, regardless if they are entitled to privacy or not on the job site. If not well educated on the positive aspects on the situational awareness platform for the entire crew, the crew will be left to their own thoughts. This can create anxiety for the crew and, even worse, the possibility of unintentional or intentional sabotage to the camera or other equipment. As with any new tool, proper education should be provided to ensure that everyone understands how the situational awareness platform is there to benefit everyone.
Finally, the use of any wired or wireless equipment at a job site needs to be properly implemented and maintained. Proper training, setup and rugged components need to be considered before attempting to install or use any situational awareness platform at a job site.
In conclusion, a properly installed and configured situational awareness platform at any marine, port or construction site can significantly reduce time, expenses and accidents. This is accomplished with a properly configured camera system and a fully trained and educated crew to support operations. 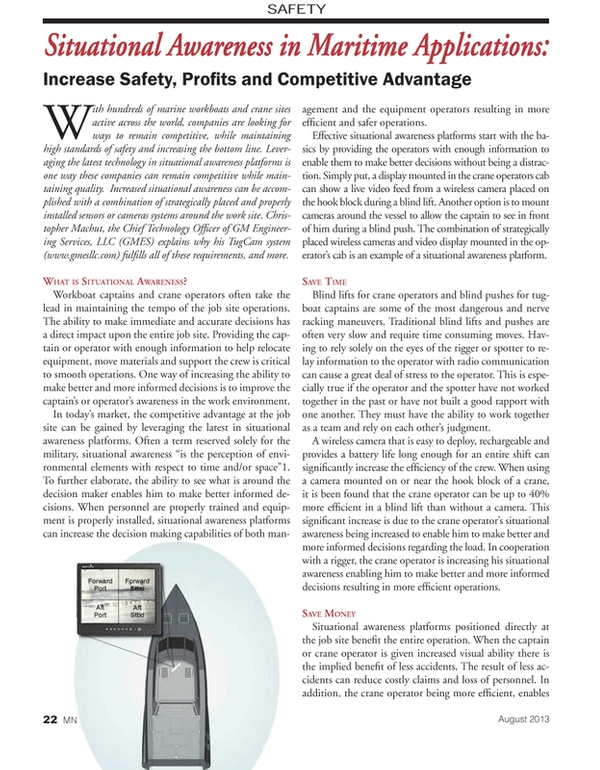