OSV’s, LNG and Deepwater: a New Climate Change for HVAC

Dometic Marine recently strengthened its position as a quality supplier of heating, ventilation and air conditioning by growing its footprint in the wider commercial marine sector. One such high-profile project includes the onboard systems for Harvey Gulf International’s newbuild projects. After securing the contract through Lemoine in 2011, Dometic worked Harvey Gulf, builder Gulf Coast Shipyard Group (formerly Trinity Offshore) and Louisiana-based Lemoine Marine Refrigeration to develop custom systems for the forthcoming liquefied natural gas (LNG)-powered Offshore Support Vessels. This allowed Dometic Marine to enhance, adapt and customize its innovative DuraSea Air-Cooled Condensing Units to ensure the equipment will withstand the extremely harsh marine conditions associated with life on board these unique, environmentally-friendly vessels.
The first Dometic Marine-built ship-set, comprised of four 10-ton DuraSea Air-Cooled Condensing Units, two six-ton units and two five-ton units, was delivered to the Gulf Coast Shipyard Group in late July. Built specifically to operate efficiently for long periods in all extremes of sea and weather, the units arguably combine to form the perfect vehicle to support crew well-being and to ensure the correct environment for sensitive electronics and other systems on board today’s increasingly sophisticated and far-ranging OSVs operating in the Gulf of Mexico.

Harvey Gulf Project
A potential game-changer in the move towards an upsurge in the adoption of LNG-fuelled vessels across the marine and offshore sectors, Harvey Gulf International’s six clean-burning, LNG-powered Offshore Support Vessels intended for deployment in the Gulf of Mexico will make Harvey Gulf the largest owner/operator of environmentally-friendly LNG OSVs in the world. Each STX USA Marine-designed vessel will be able to accommodate up to 42 crew members, with Harvey Gulf giving particular consideration to enhancing the crew comfort and accommodation on its OSVs. For instance, the vessels have spacious quarters, modern kitchens and common areas with premium equipment and Harvey Gulf extend this consideration for crew with their attention to the HVAC equipment. Dometic Marine dealer and marine air conditioning and refrigeration specialist Lemoine Marine Refrigeration, secured the contract to supply and install the on-board HVAC systems following a bidding stage in 2011.

R&D Produces New, Robust Design
Dometic Marine has further driven the technological advancement of its products to meet and exceed the requirements of a project to supply on-board HVAC systems for Harvey Gulf International’s LNG-powered Offshore Support Vessels. Dometic Marine’s stainless steel DuraSea Air-Cooled Condensing Units were further enhanced and developed to incorporate several significant design changes along with the addition of several features after prolonged discussions between the parties. The enhancements were largely initiated due to concerns about the harsh and varying sea, weather and temperature conditions endured by the vessels during sustained operations. These design-led innovations and additional features and enhancements can now be offered to future commercial clients.
The first Dometic Marine-built ship-set, comprised of four 10-ton DuraSea Air-Cooled Condensing Units, two six-ton units and two five-ton units, was delivered to the Gulf Coast Shipyard Group in late July.
Built with a cabinet of stainless-steel 304 to resist heavy salt spray and UV damage, the DuraSea Condensing Unit is part of Dometic’s DuraSea air-cooled direct expansion air conditioning equipment range. It is suitable for deck or rooftop mount and employs a unique, vertical fan design which prevents water puddling on the fan blades. The system’s innovative risers offer the option to elevate the unit above the mounting surface to provide excellent water drainage and protect the coil from debris and saltwater. The unit incorporates a scroll compressor which reduces noise and vibration of the system. The units also use the environmentally-friendly 410A or 417A refrigerant.
Several features were already incorporated in the design of the unit to ensure additional durability. The DuraSea resists corrosion with copper tube and aluminum-finned coils with a dipped coating that exceeds the 6,000-hour salt-spray test. The DuraSea also features corrosion-resistant stainless-steel fasteners and all other external components have a protective coating. The unit’s control box and compressor are strategically located within a recess in the cabinet to ensure easy access and provide further resistance against salt water intrusion and corresponding corrosion.
Additional features – based on client requirements – included a suction accumulator (for storing the needed refrigerant when the linesets are long), crankcase heater (for cold weather conditions) and low ambient fan cycle control (to temporarily shut the fan off so that the head pressure will build in the system to keep the refrigerant flowing). Other items added to the ‘standard’ units for this project were drain holes in the base, a gasket on the outer panel, a grating cover over the fan, a shrink tube over the pressure switches, watertight electrical contact, pin type or lug connectors and sealed ferrules. It was also agreed to add a phase monitor as an extra cost item to provide an alert following an incorrect electricity connection.
Key Benefits

Collaboration is the Key
Collaboration with builders and the client from an early stage was a key factor in producing this custom OSV solution. National OEM Sales Director, Dometic Marine, Ed Todd, told MarineNews in July, “Dometic was chosen for its long-life, durable products which will offer a good return on the client’s investment. We then further discussed the unit in detail with Harvey Gulf and Trinity and built the products specifically for them. The end-users really drove the design of this system. They gave us a world of information.”
Now making these adaptations formulated for the Harvey Gulf OSVs as standard options for those customers who want them, Todd believes that people on the rigs themselves will want to install the product. He adds, “It is a huge area of opportunity for us.”
Dometic Marine dealer Lemoine Marine Refrigeration has played a key part in the discussions to optimize the performance of the units and has also been able to provide feedback and advice to the OSV builders from an early stage in regard to ensuring sufficient space for the equipment. With six units originally specified for the vessels, Lemoine will actually be providing eight to ensure improved control and performance – four placed on top of the pilot house, with the other units on the lower levels aft of the deck house behind the cabins.
Vice President of Engineering and Sales, Lemoine, Dan Wilday said: “Harvey Gulf and Trinity asked for stainless-steel marine-type air-cooled units and we knew Dometic Marine had been building those for a while. In fact, in 2009, we installed one of these units on another supply vessel, Terrel Tide. We also know about Dometic’s expertise and their willingness and ability to adapt the unit for specific applications. The ones we are using on the Harvey Gulf vessels look very different and have several extra features from that prototype on the Terrel Tide.
“As well as enhancing the durability, there were also some refrigerant line issues - engineering and pressure issues specific to the Harvey Gulf project. The outdoor units are connected to the indoor units – a split system – and the structure of the vessel means the connections and tubing are very long and extensive which meant certain precautions had to be taken. We would not have had to make these adaptations when installing the equipment on a tug or other supply vessel.”
The bottom line for Lemoine? Like Dometic, Wilday adds, “It was very important for us to be involved early in the process, so we could have some input on allowing enough space for the units. It was more of a challenge inside the vessel, with the ductwork, safety and regulatory issues.” New vessels with even newer features require key equipment to have similar enhancements. HVAC installations are something most operators hope that they never have to think about again. In this case and because Dometic has done its homework, they probably won’t have to. 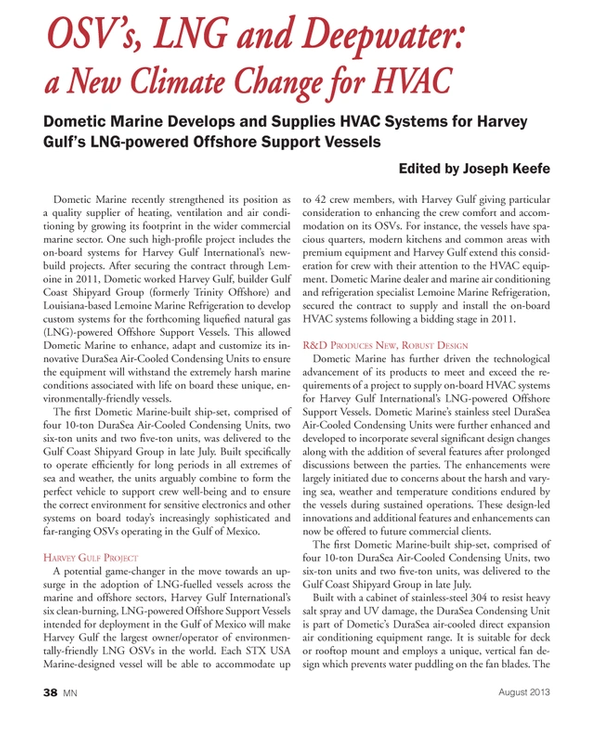